Ducati's street bike with race credentials is an unusual mix, so does it work on our streets? Share
Starting up the 1,103 cc SF V4 from cold is truly an occasion. Essentially based on the MotoGP V4 engine, it has a ‘twin pulse’ firing sequence that is signature ‘Desmosedici Stradale’, sounding every bit as menacing as you’d expect of a top-echelon race machine.
What we like:
Truly sporty dynamics and an engine little changed from the MotoGP race bike. Easy riding position and clever electronics allow full exploitation of the bike&rsquo;s potential.
What we dislike:
Fuel consumption is high. It&rsquo;s more a technical look than beautiful
which is hard to fall in love with. &nbsp;

Ducati had some fun with this one. The Streetfighter V4’s (henceforth SF V4) front design apparently is inspired by the Joker. Yes, I had to double check I was reading an official press release. 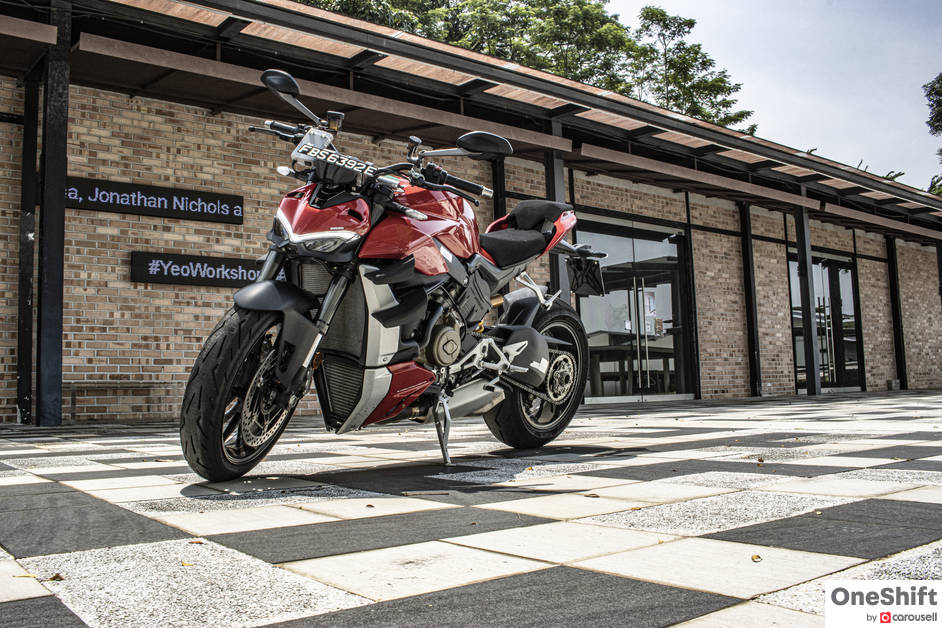 But it is also charming in a way that Ducati hasn’t really gone all straightjacketed with the SF V4, as one may expect under Audi ownership. There’s something really crazy about the SF V4, and it’s not just the Joker reference. 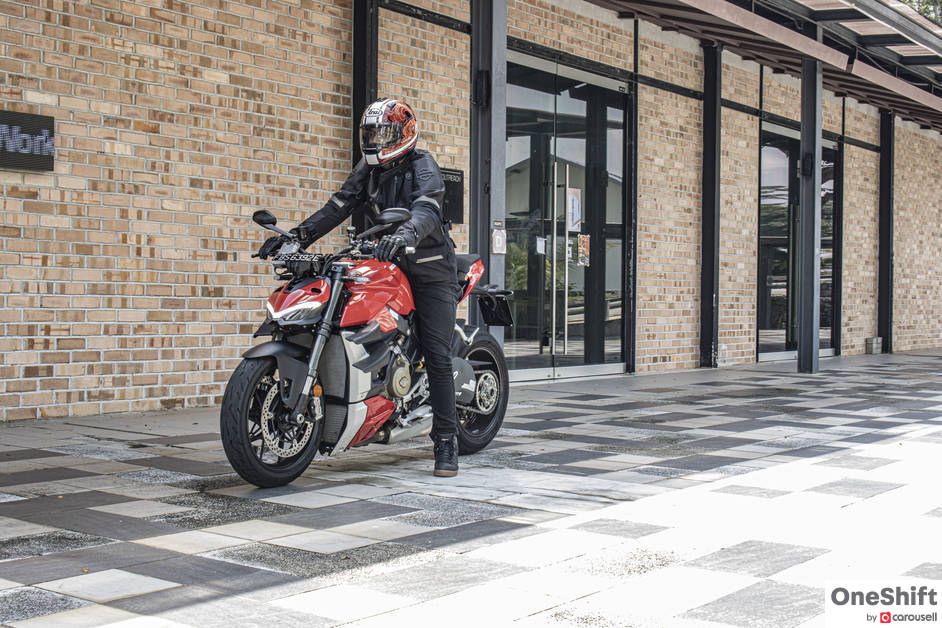 Based on the Panigale V4 sports bike, the SF V4 stripped itself of most fairings and brought its handlebars higher and wider. There is more seat foam (60 mm), a moderated foot peg position and a higher above-ground height of 845 mm. As a result, it looks less dramatic than the Panigale, but is also infinitely more usable and approachable. 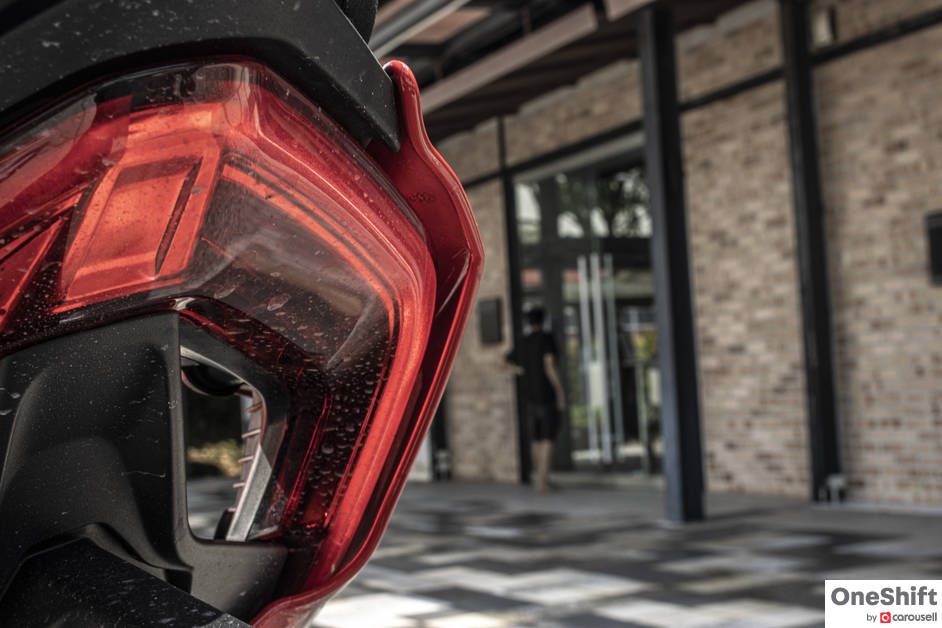 There is visual focus onto the front of the bike with the tail tapering off with only a steel subframe, which Ducati says is like a “predator coiled for the pounce”. It works to make the SF V4 look very aggressive, but I wouldn’t call it a beautiful, resolved design. 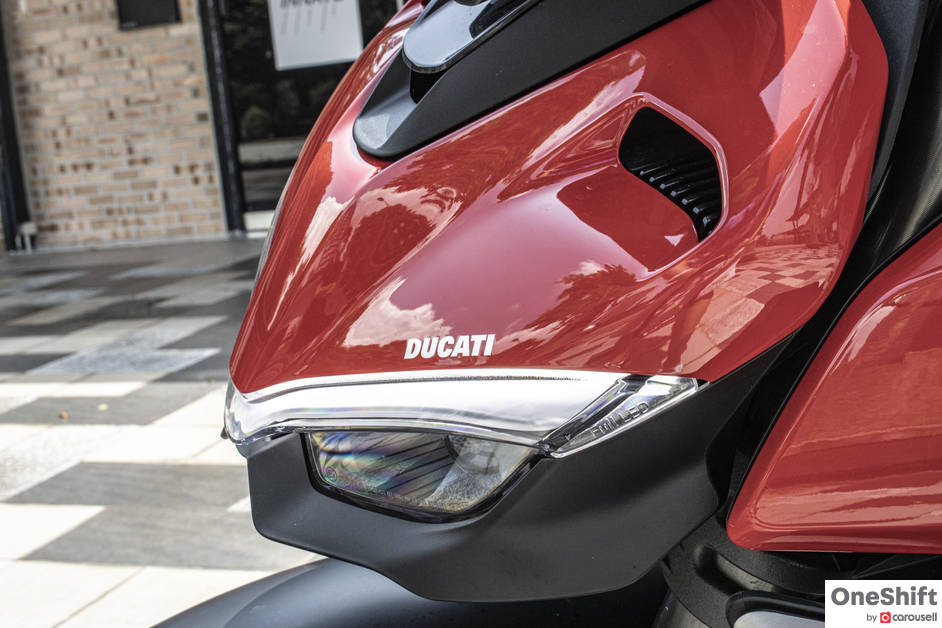 There is more technicality to the lines than emotion, evident from the F1-inspired hot air vents and CFD-simulated biplane wings (the latter generating 28 kg of downforce at 270 km/h). The “S” version, an even hotter version of the bike on test, adds even more visual drama with forged aluminium Marchesini wheels and Öhlins suspension.

Although the SF V4 has a fearsome reputation, getting on is disarmingly easy. Because of the pared-down frame, the rider is put in control of the thin, almost petite body. It is necessary to have a slightly forward leaning stance to reach the handlebar, but pressure on the wrist is only felt on longer rides. The footpegs are also set a little sportier than usual, but it is no hardship to get comfortable very quickly. Due to the lower ride height of the SF V4 compared to a conventional road bike, you can almost have your whole feet onto the ground too when stopping. 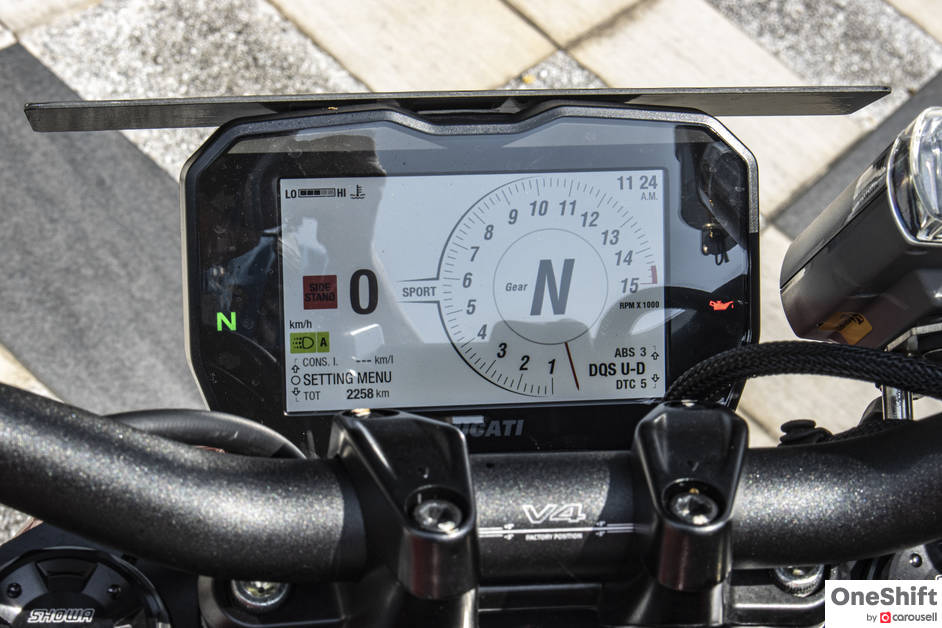 There is a very large digital screen which is a premium touch, but it is not so intuitive to click through the menus from the handlebar buttons. There is also an encyclopedia-like amount of settings you can cycle through in the MotoGP-derived electronics, with acronyms like Ducati Slide Control (DSC), Ducati Wheelie Control (DWC) and Ducati Electronic Suspension (DES), so it takes some getting used to. Thankfully, there are already pre-set modes that you can just set and go. 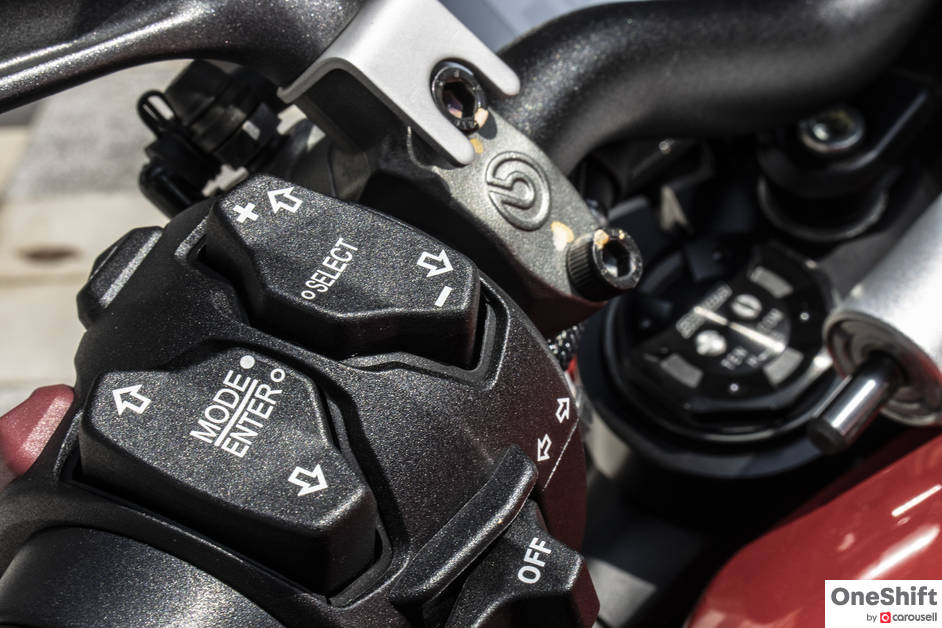 Starting up the 1,103 cc SF V4 from cold is truly an occasion. Essentially based on the MotoGP V4 engine, it has a ‘twin pulse’ firing sequence that is signature ‘Desmosedici Stradale’, sounding every bit as menacing as you’d expect of a top-echelon race machine. Producing 208 hp at 13,000 rpm and propelling only 201 kg, the power-to-weight ratio rivals some of the fastest cars in the world, production or not. 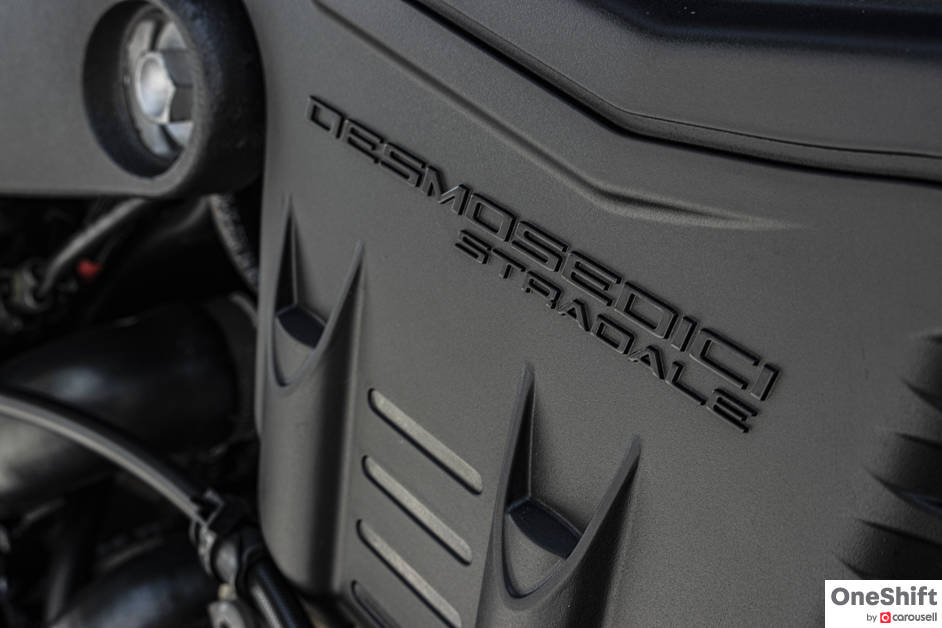 Astoundingly, the V4 is terrifically civil in urban speeds. There is a well-balanced smoothness in the way it builds up its revs, as well as cylinder deactivation (the bike never really feels too hot), so it is supremely easy to ride even in traffic. But the magic in the engine is in its top end, which sadly cannot really be exploited in Singapore without going way above the speed limit. First gear sprints to 11,000 rpm (redline is at 14,500 rpm) already feels like redlining a 997.2 GT3 RS’ Mezger, so I really can’t imagine what it’s like in the SF V4. The best thing about the higher revs is the sound, which builds up to a gruff, mechanical roar that is reminiscent of the MotoGP race track. It’s truly a breathtaking experience. 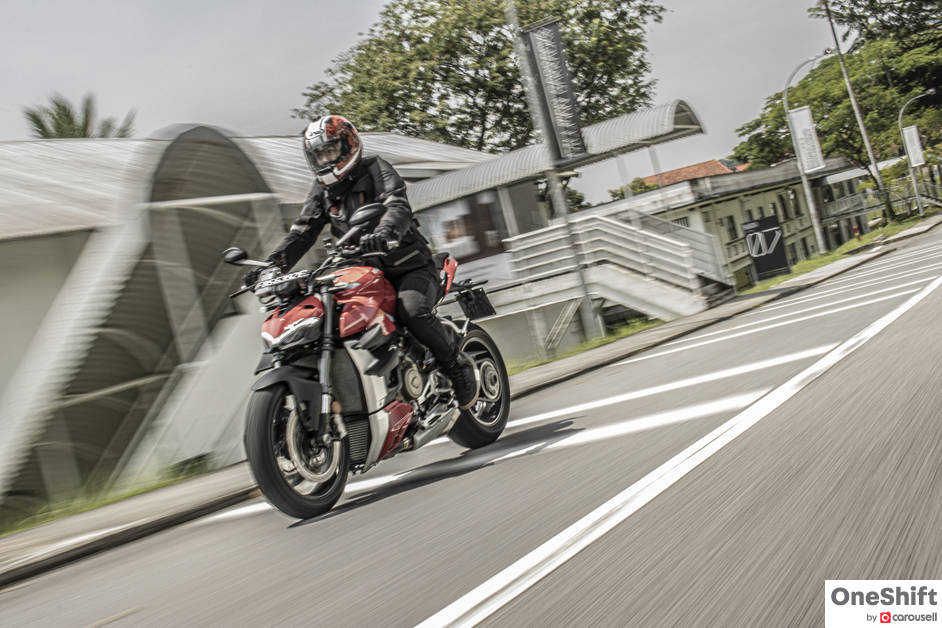 What really adds to the race frame of mind is Ducati Quick Shift (DQS). Not needing any clutching in and out to change gears up or down, it transforms the meaning of on-tap power. The higher you rev, the smoother and seemingly faster DQS seems to shift, an intoxicating chase of the elusive redline. The mechanical action of the foot peg changes is also precise and race-like. In car terms, it feels a little like a dual-clutch transmission. It makes a huge difference when riding, because there is one less thing to worry about on top of the many more considerations and heightened concentration. 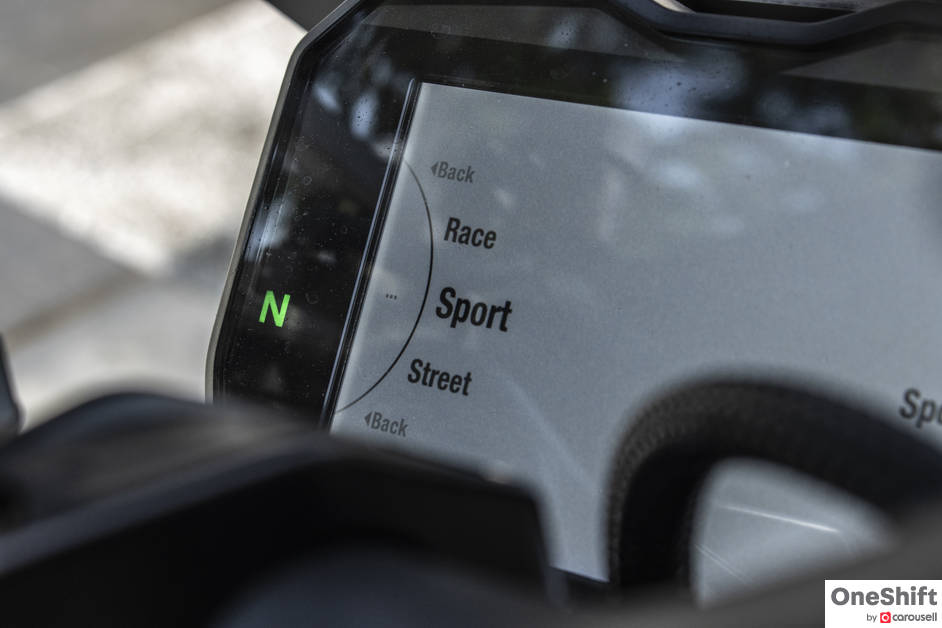 Being true to its Streetfighter brief, the SF V4 is a natural in Singapore’s urban streets. It feels light on its feet and, perhaps thanks to the electronics, gives a huge amount of confidence to stretch the potential of the engine. There is an incredible level of grip, while turn-in is sharp and decisive. The brakes are full of feel and reigns in all that pace reassuringly. Only on the highway does the bike feel a little out of its element with the rider exposed to cross-winds with little protection. The bike also drinks whatever the occasion - the fuel reserve light came on only after 170 km! 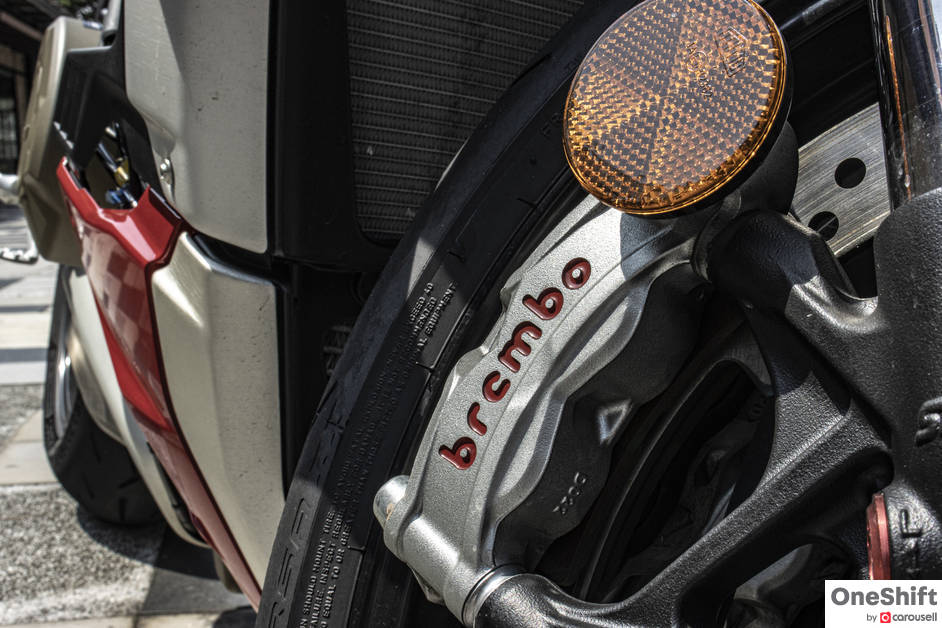 The SF V4 has made the seemingly intimidating such an ease. Although the MotoGP references can make one feel like the bike only fits the race track, in truth, the SF V4 is a revelation on the street. It is wanting for nothing in terms of the way it handles on our roads, yet delivers eye-watering pace and a wide usability band from its iconic engine. I think this fight is a convincing win.

Find all your motorcycle needs on Carousell: https://bit.ly/3sVygSu 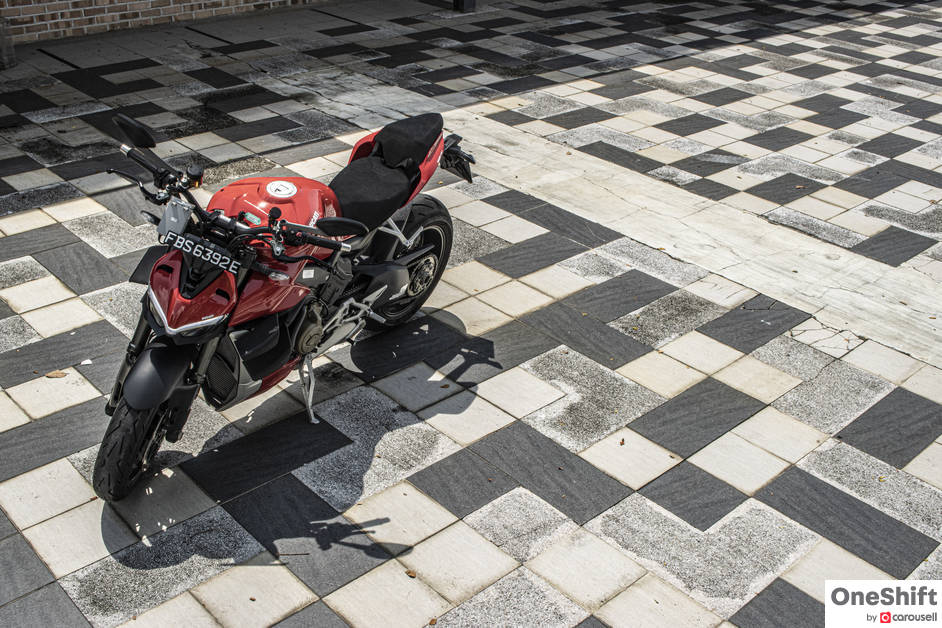