Audi e-tron S Sportback Review: What (almost) 1000 Nm of torque in an Audi feels like Share
... the e-tron S Sportback sits in a class of its own as the only “S-versioned” (or performance-oriented) SUV-styled EV amongst the current range of offerings. If there was a single opportunity where uniqueness could be bought, this would be it.
What we like:
&lt;p&gt;Extremely comfortable cruiser
no hint of its mass from the way it handles
endless amount of grip
torque figure.&lt;/p&gt;
What we dislike:
&lt;p&gt;Range is something you'll have to take note of if you're driving up north
might take some time to find a parking lot that will fit this big fella!&lt;/p&gt;

If only more Audis on our roads were specced in colours as bright as the Catalunya Red paint that our test car came in. This bright shade of red, (or orange, as some might argue) is a refreshing choice compared to the typical monochromatic paint options that most Audi owners tend to veer towards. Even if it takes some inertia to overcome, I’m very sure this dazzling tone will grow on you as you come to experience an EV as electrifying as the e-tron S Sportback we had over the weekend. 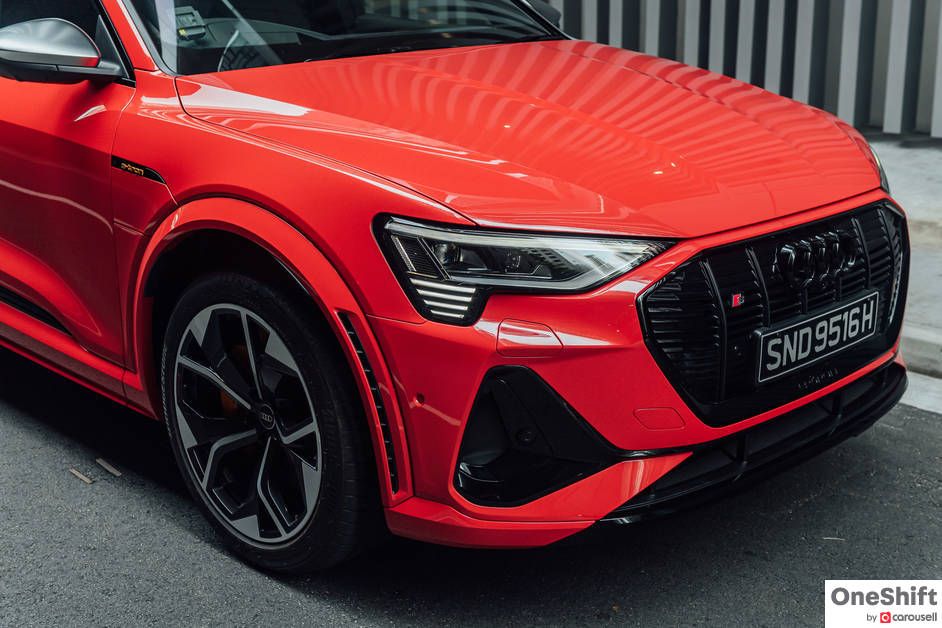 The ’S’ moniker in Audi’s range is typically reserved for its sportier cars – not as hardcore and track-focused as its ‘RS’ series, but more sporting luxury, like how The Transporter likes his getaway vehicles. So, despite this being the first time for Audi’s e-tron’s range to be given the ’S’ treatment, the stage has already been set for this latest introduction. 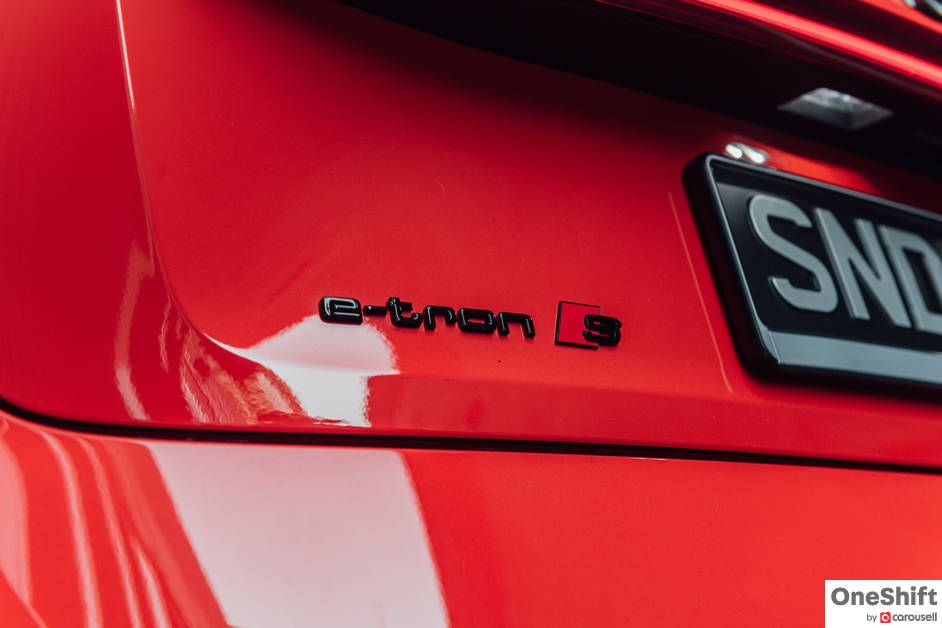 Available in both standard e-tron S and e-tron S Sportback guise, with the latter being tested here, its sporting nature shows through its exterior appointments. Unlike the standard e-tron S that is garnished with cool-brushed aluminum trim, our test car came with the optional Black styling package, which meant a black-accented grille, bumpers and wing mirrors. Paired with wider body coloured fenders (23 mm on each side) to house its widened track, the e-Tron’s stance is aggressive, and signals its athleticism over the standard e-Tron.

With its optional diamond-turned 21-inch rims, there is a hint of Lamborghini Urus in the way this particular unit has been configured, especially with its bright red coat. Almost like current contemporary hypebeast-esque street wear, these trainers will not seem out of place on the Orchard Road shopping belt. 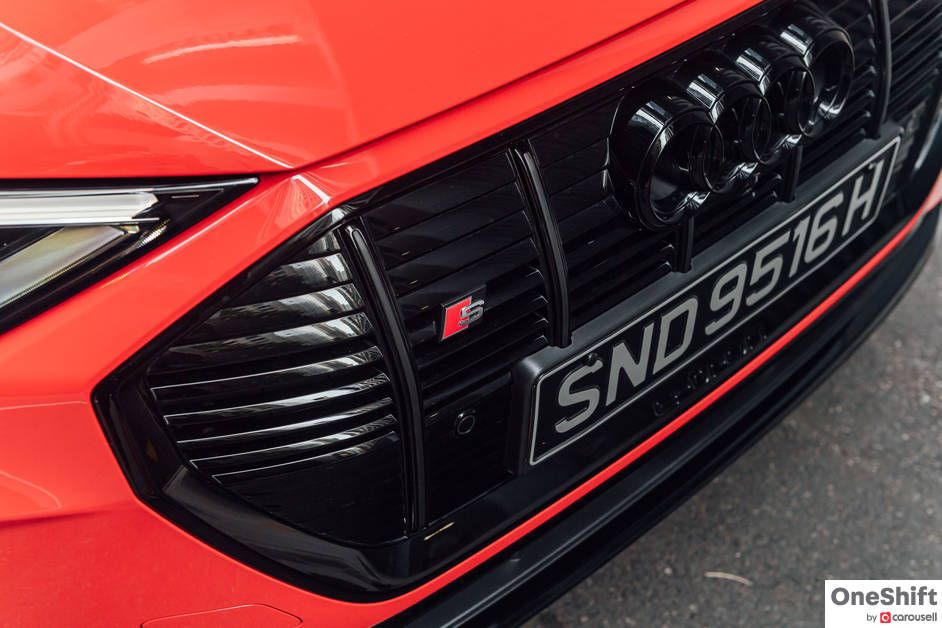 The S differs from the standard e-tron not just in its looks, but also in its powertrain. What was a rear-biased dual-motor set up has been enhanced with a tri-motor system. Audi has placed 2 of the smaller motors that powered the e-tron 55’s front axle at the 2 corners of the S’s rear and moved the 55’s rear motor to the front axle of the S. Not only does this set-up enable the Audi to hurtle to 100 kmh in 4.5 seconds, but it also allows for staggering levels of grip through its torque vectoring capabilities. 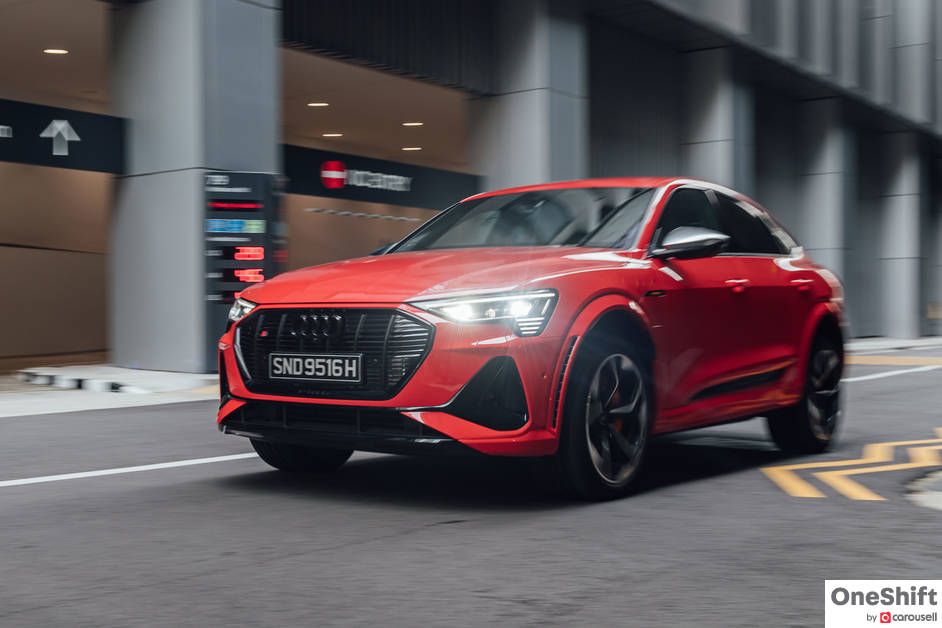 It is the way this behemoth tackles corners where Audi’s Quattro all-wheel-drive know-how shows through. Being an asynchronous set up, power is transferred between its rear wheels depending on the amount of traction available. The result is a 2.6 tonne EV that shows no indication of its heft through the bends. Granted it leans into the corners slightly due to its height, the e-tron S otherwise simply grips and goes. 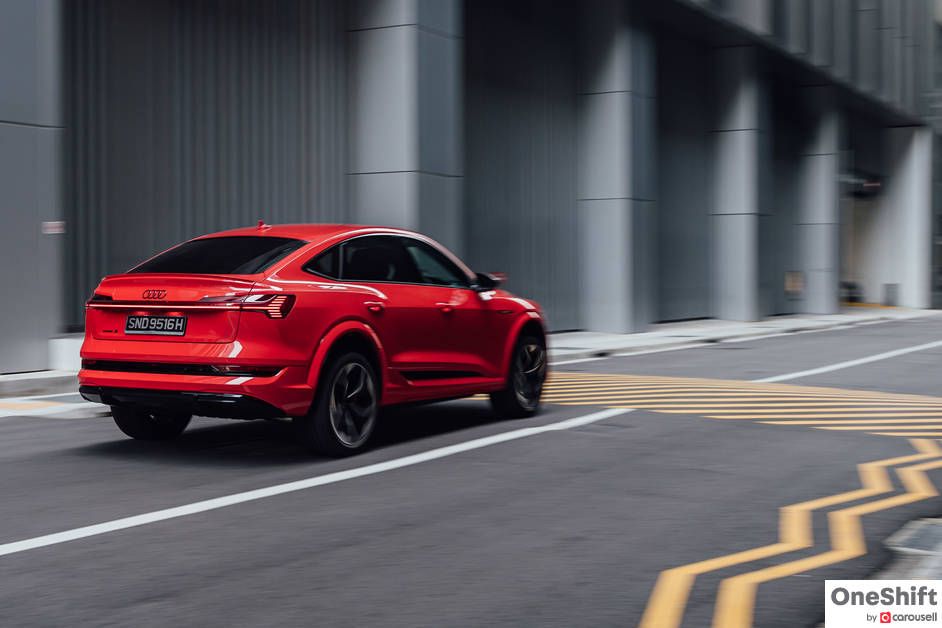 Acceleration is linear, and whilst it may not possess a physics-defying and nausea-inducing ability to launch itself from a standstill like the RS e-tron GT we tested earlier in the year, Audi’s engineers have accorded the e-tron S with just enough oomph to feel sporty yet creamy-smooth and civilised, all at the same time. Just like goldilocks’ porridge – not too cold or hot, but just nice.

With a track that is wider than a Lamborghini Huracan, manoeuvring the e-tron can be a challenge owing to its large footprint, but this has been made easier with excellently deployed 360-degree and top-down cameras. This is fed through Audi’s familiar 3-screen cockpit set up which we are all very used to by now. Its infotainment system is a breeze to scroll through, and allows for easy control of climate settings, vehicle drive modes and media. 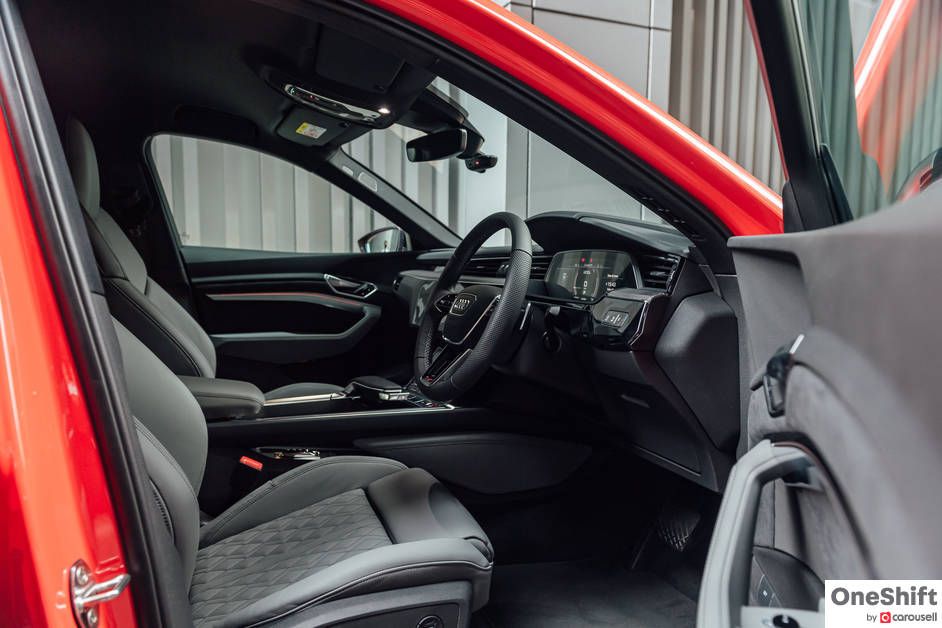 On the inside, the e-tron S retains the same premium-feel you get from the 50 and 55 – every button, lever and dial has a satisfying ‘click’ to it when toggled. I don't know about you, but the sensory experience of brushing one's arm against the combination of smooth-leather and velvety-alcantara that the Audi's cabin has been trimmed in just oozes spades of luxury. Being an S-model, the e-tron has also been blessed with its signature figure-hugging sports seats.

Rear occupants have not been forgotten – despite the sloping roofline in this Sportback variant, those in the rear will be hard pressed to notice any loss in headroom. Of course, not leaving out the Sportback's liftback, the Audi is able to comfortably swallow your bicycle for that weekend spin around East Coast Park. 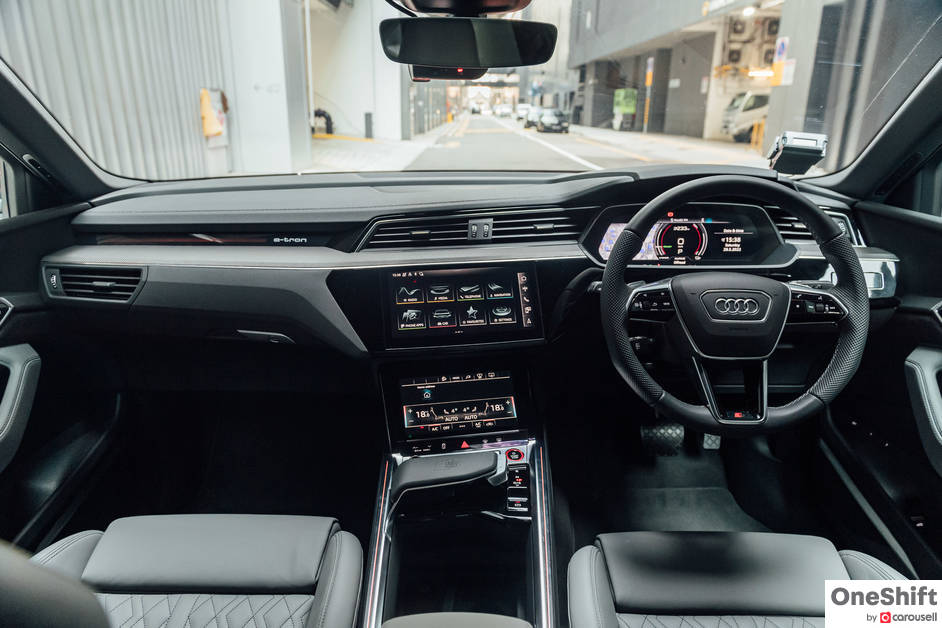 Its cabin feels airy, even with the black-grey interior colour-way presented here. Overall, the e-tron S, despite its sporting credentials, maintains its status as a proper luxury car once placed in comfort mode. I daresay it can be both a car to drive and one to be driven in at the same time.

Despite its premium pricing and unkindly harsh road tax owing to local legislation, the e-tron S Sportback sits in a class of its own as the only “S-versioned” (or performance-oriented) SUV-styled EV amongst the current range of offerings. If there was a single opportunity where uniqueness could be bought, this would be it. 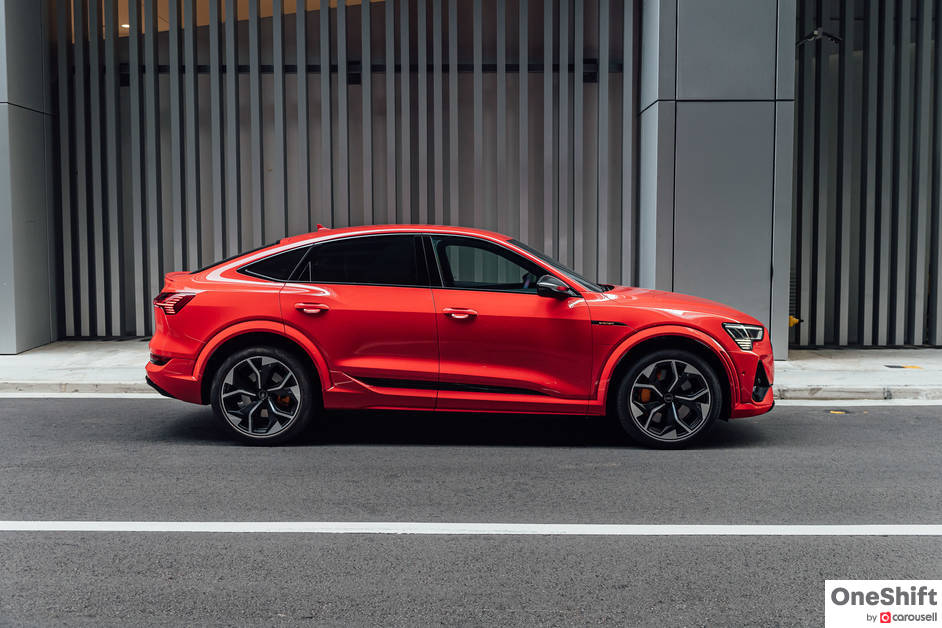 In terms of day-to-day living, its range will not be an issue for most people, given that most owners tend to leave their EVs to charge overnight. Despite recording approximately 320km on a full charge (during our very unscientific testing), which included some rather aggressive driving, the e-tron S’s capacity is more than sufficient for a day’s worth of commuting around our island nation. Hence, just like the existing range of Audi S-series vehicles, the e-tron S Sportback’s ability to offer an excellent blend of practicality, sportiness and comfort enables it to perform as an excellent, everyday go-fast (EV) SUV, albeit one that will prove to be a stand-out amongst the current EV crowd.