The Kia Niro EV banishes all thoughts of range anxiety with class-leading efficiency. Is it the car that first adopters have been waiting for? Share
... no matter which mode you choose, the car can make you feel like you can outrun a Kia Stinger.
What we like:
Efficient and devastatingly quick drivetrain
offering truly great real world range and yet with the power and responsiveness of a sports car (we kid you not). It also feels on-trend by being a fashionable crossover
yet with hardly any EV-typical compromises. A very clever and accomplished electric vehicle.
What we dislike:
Some aspects of the car feel below its asking price
ride can feel more sporty than you&rsquo;d like. The battery is warrantied for 5 years / 150
000km
so it could be expensive to replace batteries after the warranty ends. &nbsp;

Car manufacturers from different regions of the world sometimes reflect the cultures of where they originate from. Japanese cars are rock solid reliable, but they can also be slow and cautious when it comes to innovation. German cars tend to be good for high-speed driving, thanks to the derestricted Autobahn, but until only very recently were favoured for their diesel engines. Well, what exactly defines a Korean car? 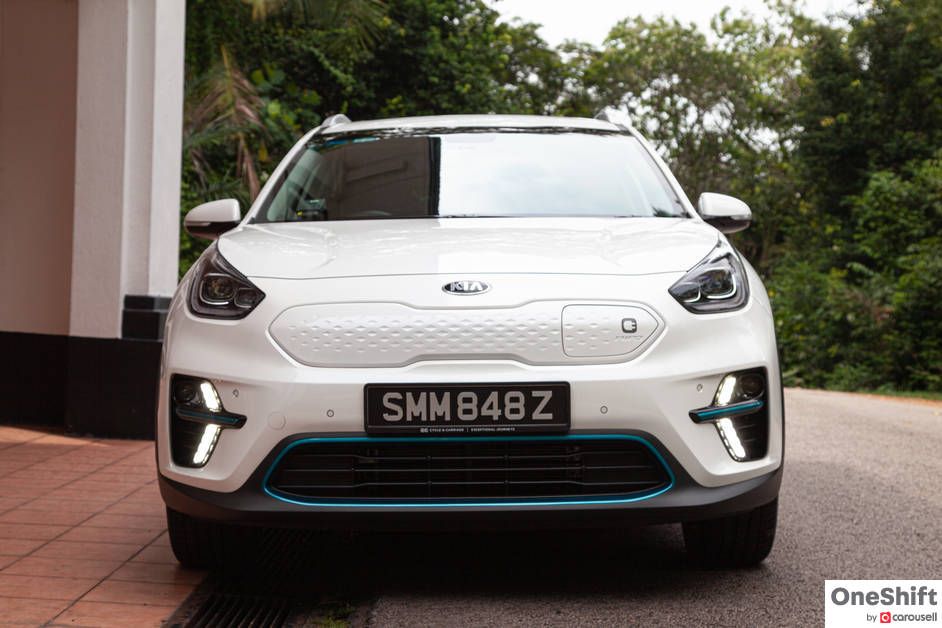 Certainly, they have found their footing in the world and are now more confident than ever before in what they stand for. In the land of technology giants like Samsung and LG, it is no surprise that Korean cars are innovative. So much so, in fact, that instead of just playing the internal combustion and hybrid game, Kia (and to the same extent, Hyundai) leapfrogged much of the automotive industry to retail an electric vehicle that can run with an official range of more than 450km, is hardly any less practical than a petrol-driven equivalent and has a gentle learning curve for those trying electric for the very first time. I have only seen mainly German luxury brands that can claim the same, and in Singapore at least, none of them have reached the market as quickly as the Koreans. 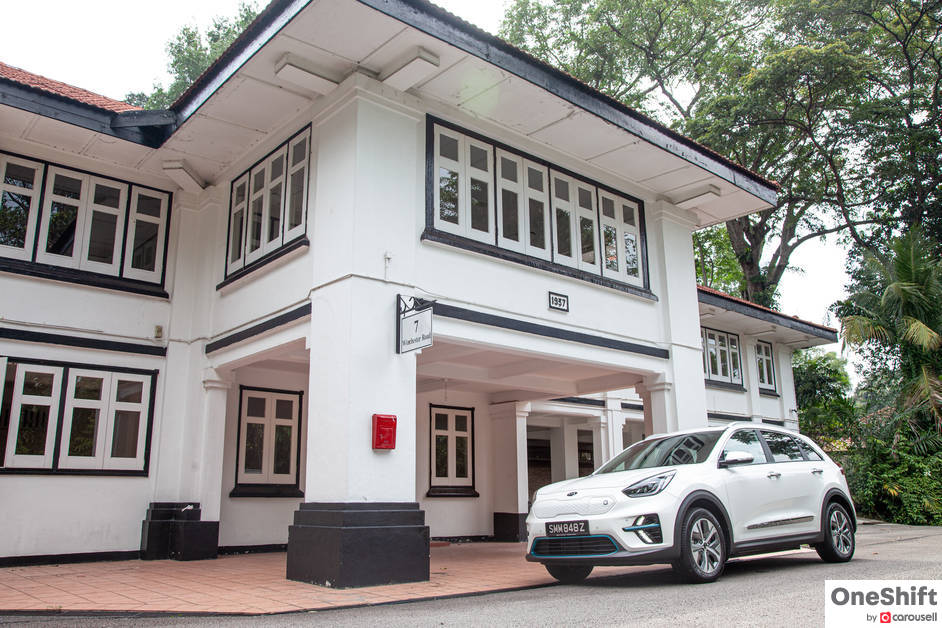 However, being a first mover always brings the most risks. Oneshift susses the Niro EV out for you to see if it’s a leap of faith worth taking. 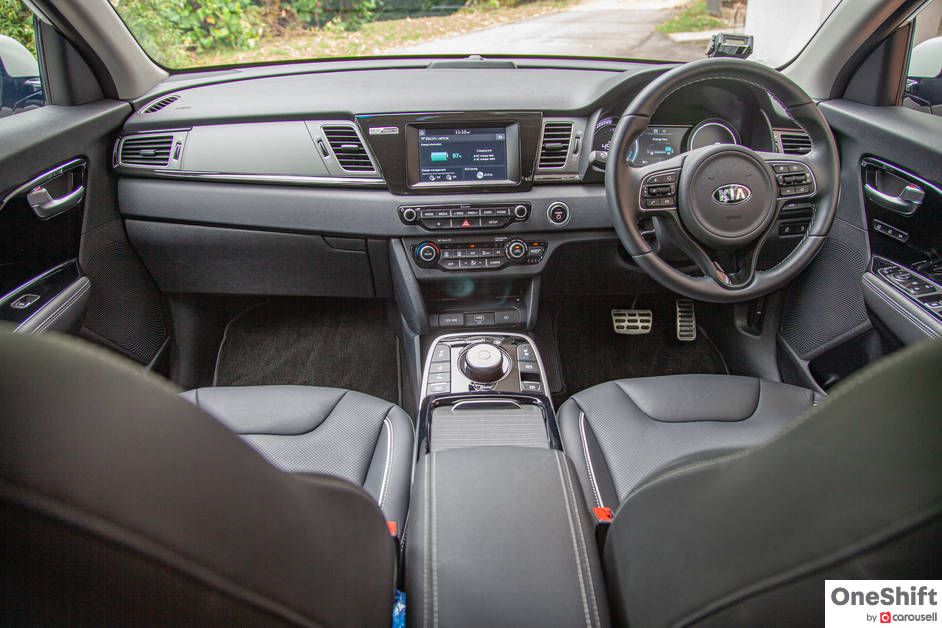 For the early adopter there is not a lot more to get familiar with inside. The Niro EV’s interior takes after the conventional Niro’s, save for some changes to make more efficient use of the extra space thanks to the lack of a driveshaft. For example, the gear lever is replaced with a knob to toggle between Park, Drive and Reverse, so there is additional storage space between the two front seats. 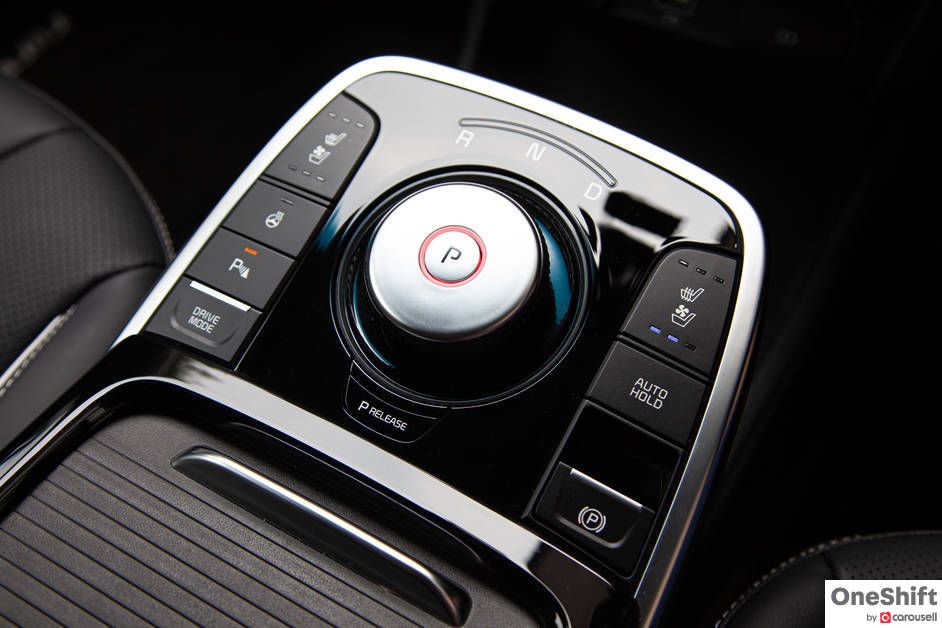 There are also little details that uplift the interior ambience a little. The gauges are fully digital and give a wealth of data including energy flow, driving style monitor and state of charge. There is some added functionality to the infotainment for EV-specific menus, and there is even a button to switch the air-conditioning to ‘driver only’ to boost efficiency when there are no passengers on board. 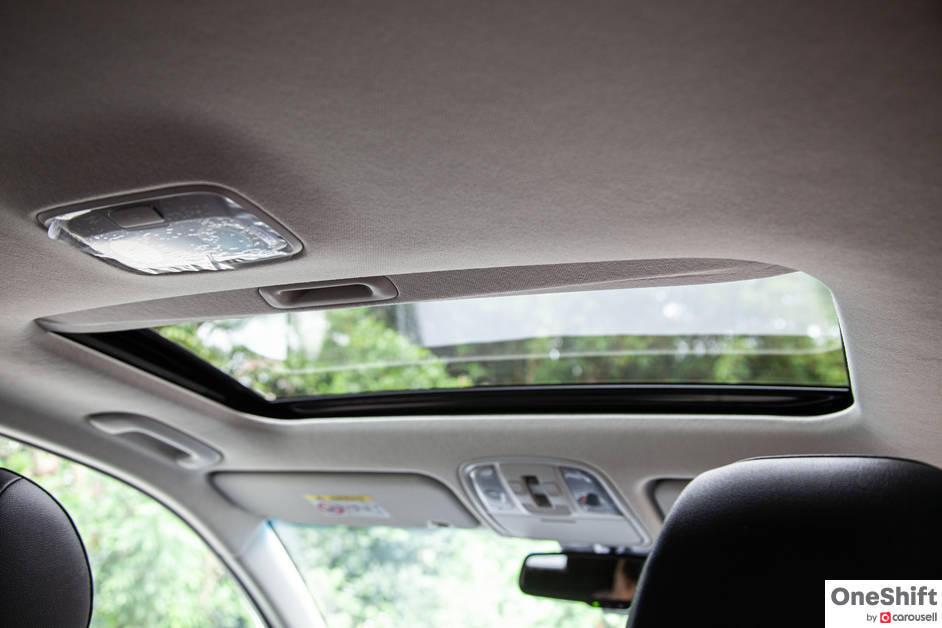 Otherwise, it’s just like the conventional Niro. Like the hybrid, the Niro EV is extremely well-equipped. It comes with luxuries like ventilated and memory front seats, a Qi wireless charger, Blind Spot Detection, Rear Cross Traffic Alert and a sunroof. 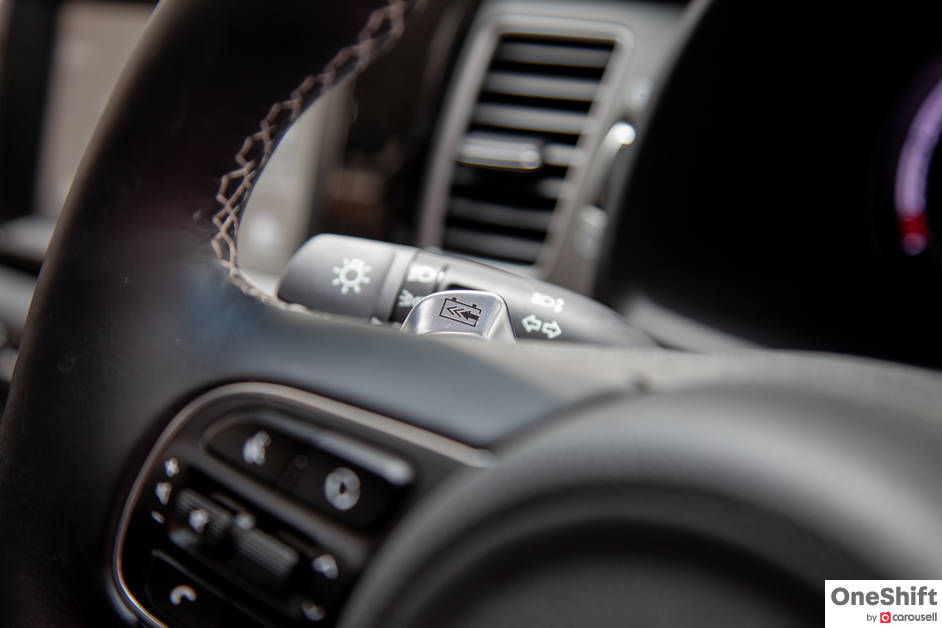 I’ll put it out there at the start: the biggest differentiator for the Niro EV is in the way it drives. A small recalibration is needed jumping from a combustion engine car, but because you can control the level of brake regeneration via ‘paddle shifters’ on the steering wheel, you can reduce it to a level where it feels almost as close to normal deceleration via engine braking. Or, you could also turn it up to the maximum to enjoy one pedal driving. It is a strange sensation pulling the pedals to get different regen, but it does make sense. 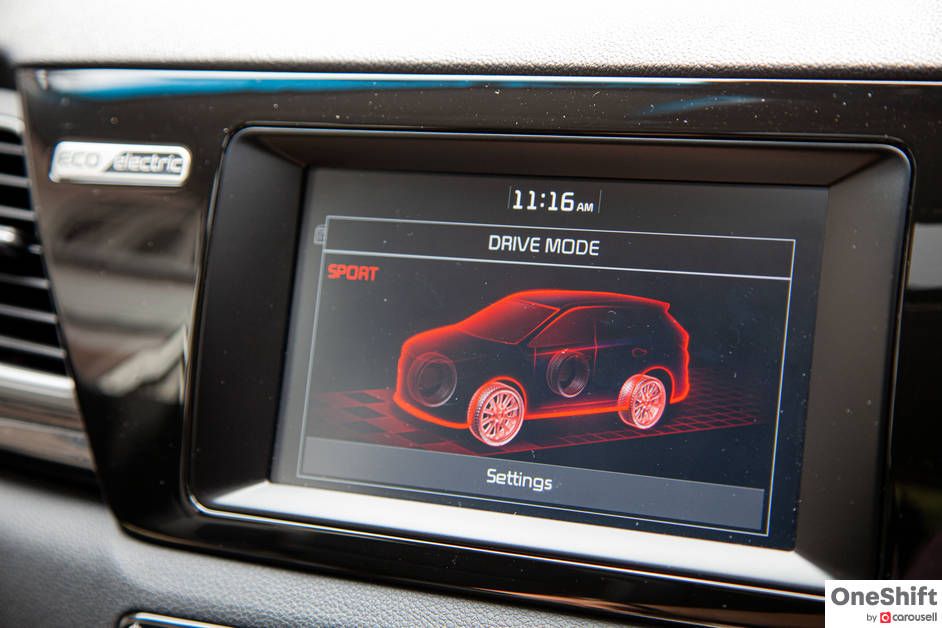 With a 64kWh battery, the Niro EV is good for 204PS and 395Nm. It sprints 0-100km/h in 7.8 seconds, but in reality, it feels a whole lot quicker. Kia couldn’t confirm if the different drive modes (Eco, Eco+, Normal, Sport) yield different acceleration times, but no matter which mode you choose, the car can make you feel like you can outrun a Kia Stinger. It made me feel a little giddy with the repeated G forces. It is just so much more responsive that it should be viewed as a completely different car to the Niro Hybrid. My notes described the acceleration as ‘feral’ and it can chirp the front tyres easily with a slightly heavy foot. 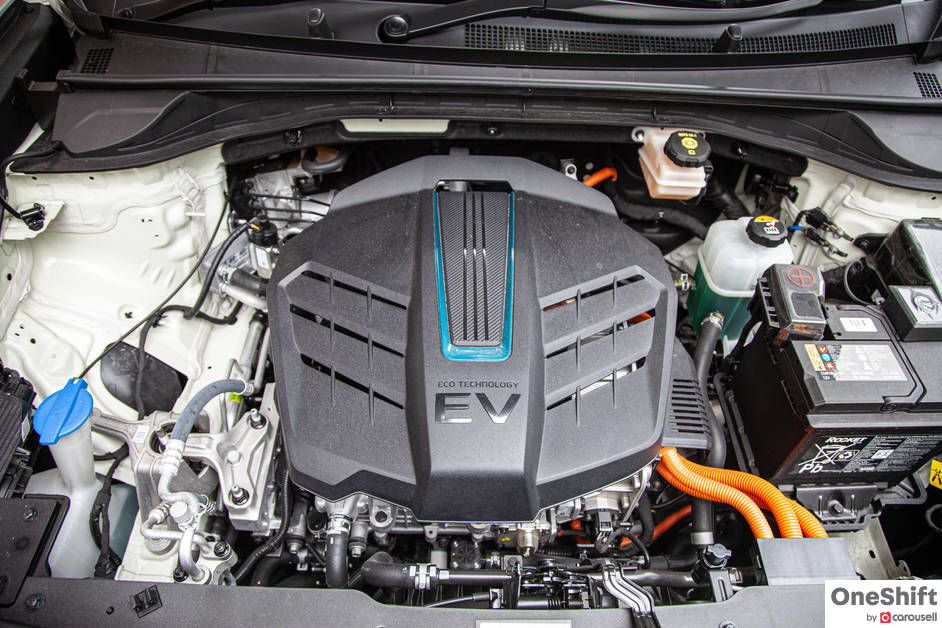 If the cynic in you feel that speed is cheap for an EV, get this: the Niro EV can handle pretty tidily as well. Because of the low centre of gravity, the Niro EV has physics on its side. Your passengers will get sick far quicker than you are able to hit the limits of what the car can do. On hard corners, the tyres will protest and eventually digress to understeer, but you certainly don’t expect this kind of performance from a tree-hugging Kia. The downside to this handling is the slightly stiff ride. 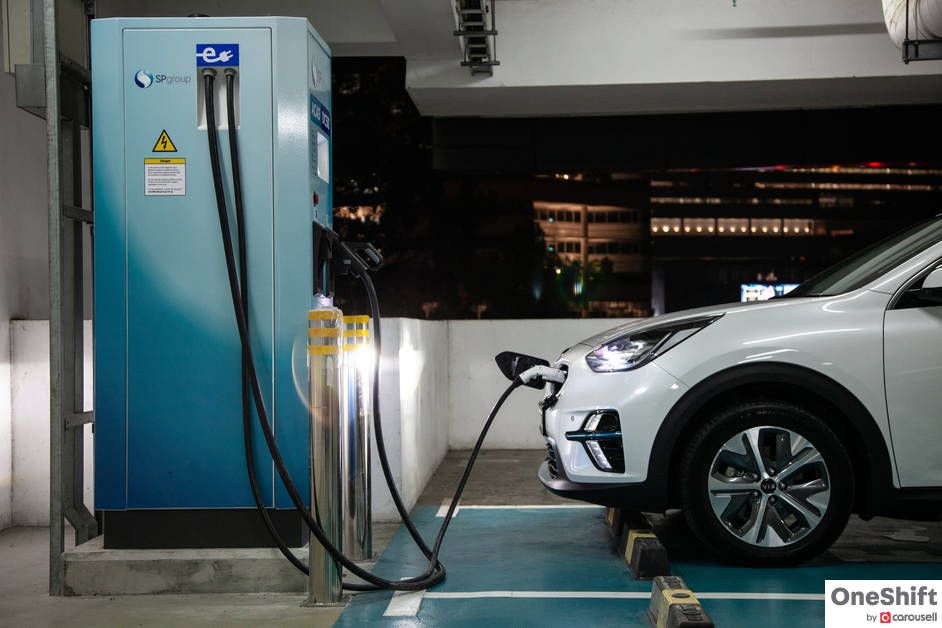 With all that hard driving, it’s remarkable how much range is preserved still. When I collected the car, the range readout was 550km, even higher than the official figure of 455km. When I switched on the air-conditioning, it became 505km. After my best attempts to drain the battery, I travelled 251km and still had 178km left to go, according to the trip computer. That is a real world range of approximately 429km, and I did not even try to be efficient. It is a truly remarkable drivetrain, something that I reckon can futureproof you for some time yet. It is also compatible with both AC and Combined Charging System (CCS) fast charging, both of which are offered on SP Group’s nationwide charging network. With a 100 kW charger, the car takes 54 minutes to go from 0% to 80%. 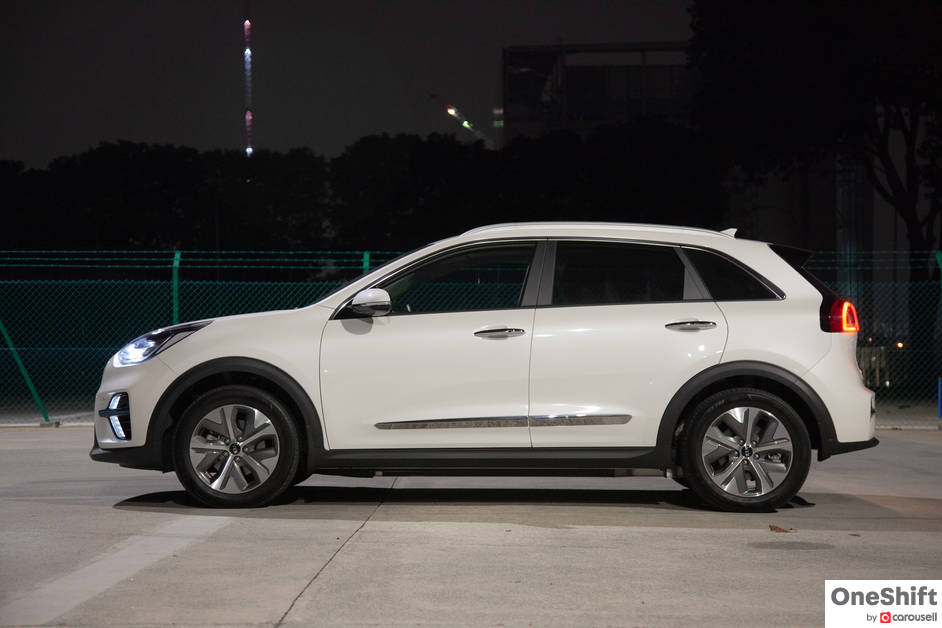 If you want to drive sedately though, the car does reward you with a near silent drivetrain (there is a faint spaceship whirr for safety purposes). That said, the car’s noise insulation is not great, so the rumble of passing trucks and motorcycles does intrude quite pervasively. This is where other factors start to play in one’s mind: this is not a luxury vehicle. So the windows close with a loud thunk, the seats do get uncomfortable after a long journey and feet can’t tuck below the front seats, limiting legroom. 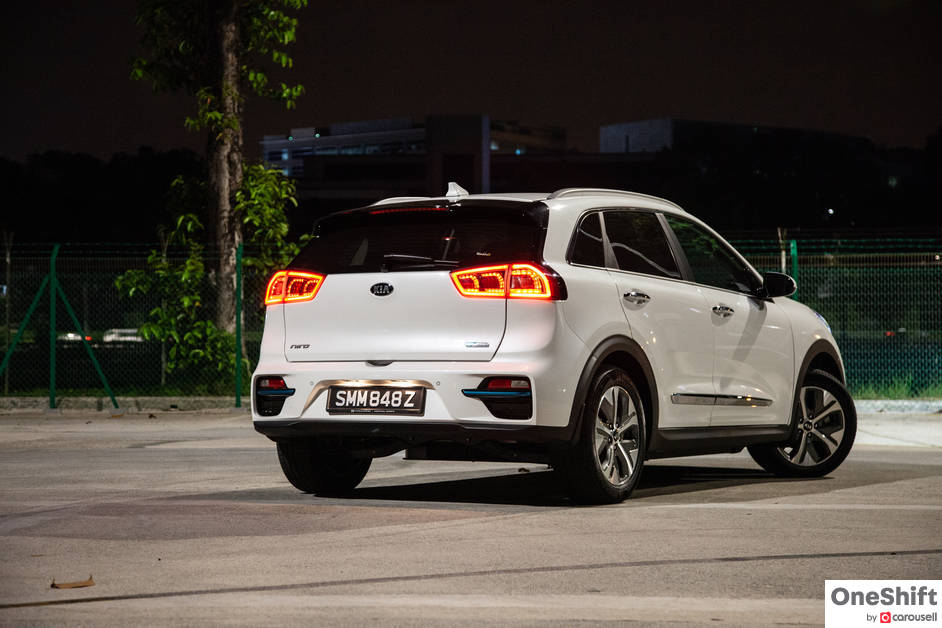 Not a luxury vehicle but at a luxurious price? At $187,999 after promotions it is asking for a cool $74,000 more than the highest trimmed Niro Hybrid. With such an ask, even coming fully optioned and with the charging station installation included, the Niro EV does seem to raise expectations a little too high to meet. 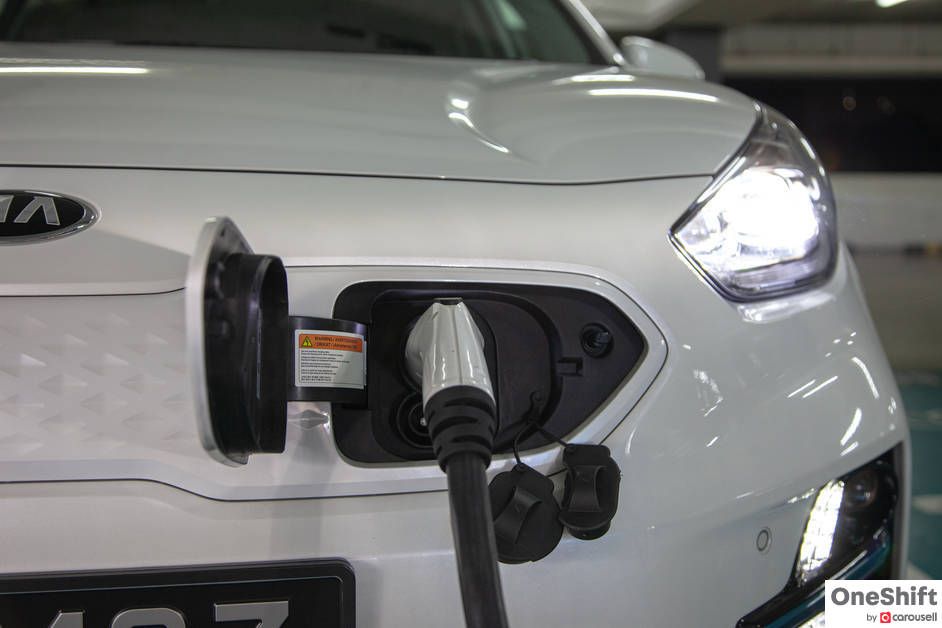 That said, it is fairly unique in the market at the moment with the sort of range and power it can provide. If I could surmise, it is a truly innovative and fabulous drivetrain which perhaps is a little hampered by the car on which is based, which competes at a lower price segment. 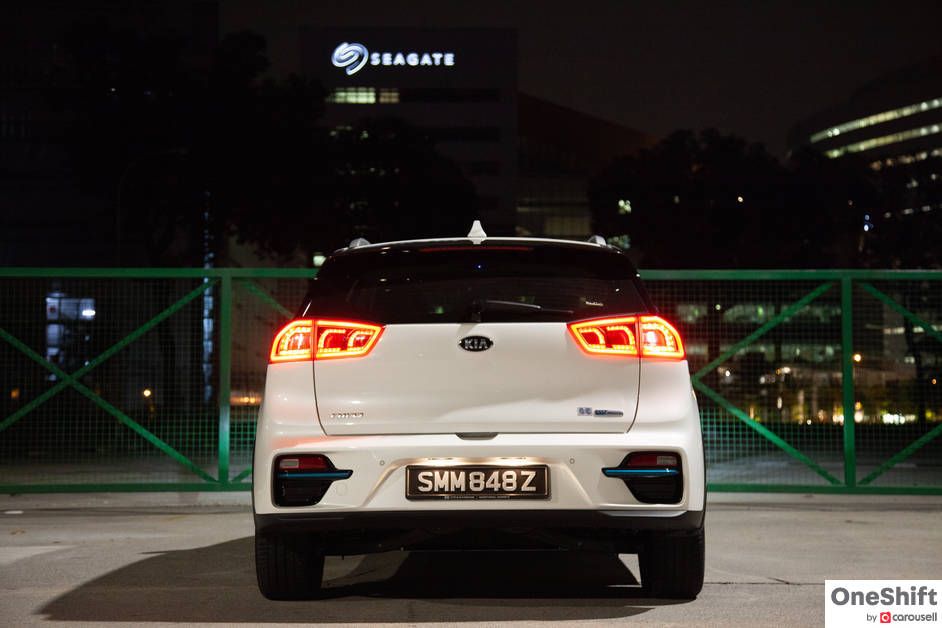 However, not everything is about dollars and sense for the first adopter, especially with new fangled technology. Sometimes there isn’t a price to tag to a car that is one of the best EV offerings in its segment right now. If you must be first, then the choice is clear.