BMW 218i Active Tourer Review: Coming Back for Seconds Share
What you get with the 2AT is not just a practical family runabout but one of the first few models that would start the ball rolling for this latest BMW design-iteration instead of one that merely takes inspiration from its bigger cousins.
What we like:
&lt;p&gt;High attention to detail in design and features
comfort
genuine joy to drive
inspired by the upmarket iX&lt;/p&gt;
What we dislike:
&lt;p&gt;Enlarged kidney grilles splits opinions
gearbox shifts best at higher speeds&lt;/p&gt;

I still remember the stir that the 2 Series Active Tourer (2AT) caused when it was launched on our shores back in 2014. But one of my first encounters with the car only came along a couple of years after, when a friend had one as a loaner when his car was down for major servicing. Initially a far cry from the sporty nature of the brand, it was hard to imagine BMW coming up with a family MPV, what more a front-wheel drive, 3-cylinder car. But little did we know then, that the passage of time would treat the 2 Series AT rather kindly – more than kindly in fact, given its blockbuster sales figures globally. If that fact does not resonate with you, I guarantee that you’ll be able to spot at least one 2AT (or Grand Tourer for that matter) within a minute of observing by the side of any road. 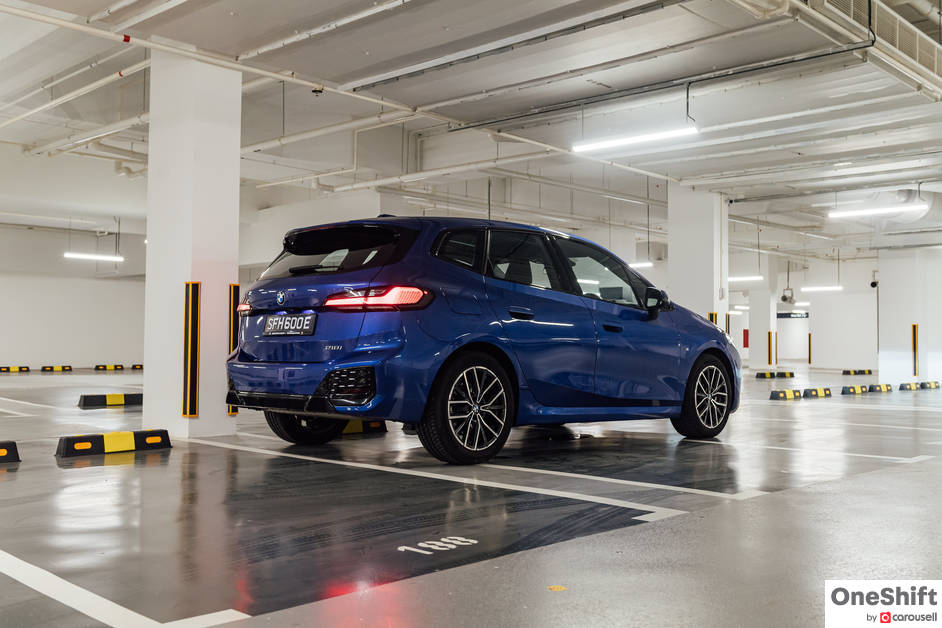 Having become such a ubiquitous sight on our roads since its launch 8 years ago, its popularity has been good reason for BMW to pay greater attention to the latest generation. From the off, you’d notice that the 2AT looks sleeker than the previous generation. Despite being just a hair taller, wider and longer than the one before, the Bavarian design team has somehow managed to erase all traces of this increase in size. 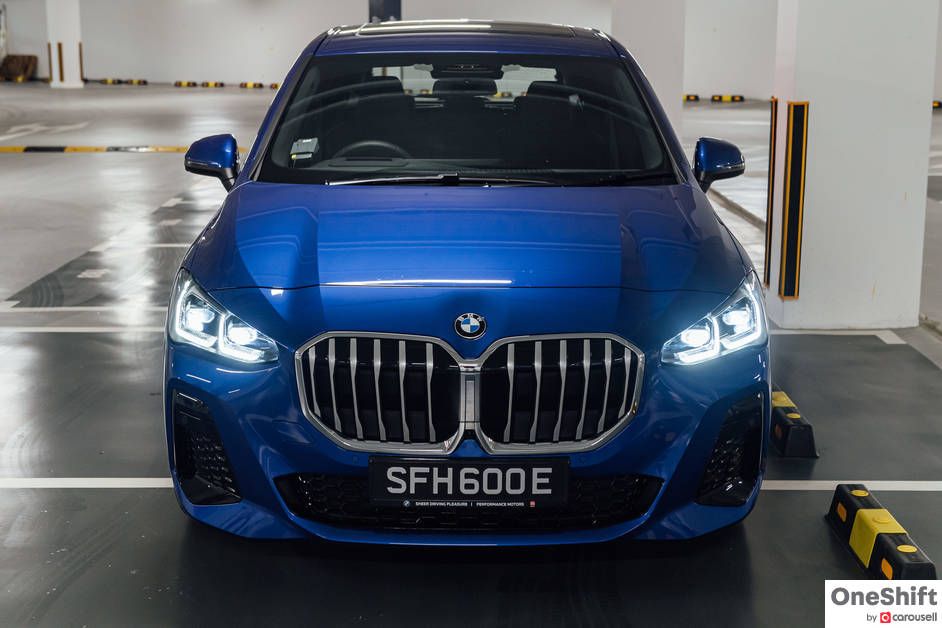 With an enlarged kidney grille that houses automated flaps that open and close depending on engine temperature and sharper “eyes” (headlamps) up front, the 2AT looks a lot more mature than the outgoing generation. Moving onto the rear, which takes strong cue from the BMW iX, the slim LED tail lamps that run towards its centre helps to give the impression that it is sitting low to the ground.

Given the low-slung impression that the 2AT’s lines exude, it feels paradoxical stepping into a cabin as airy and spacious as the one it has. Although one sits a little high off the ground, the 2AT manages to feel as sporty as a family hatch can be. Especially in our test car, which came with alcantara-leather sports seats and a chunky M Sport steering wheel. 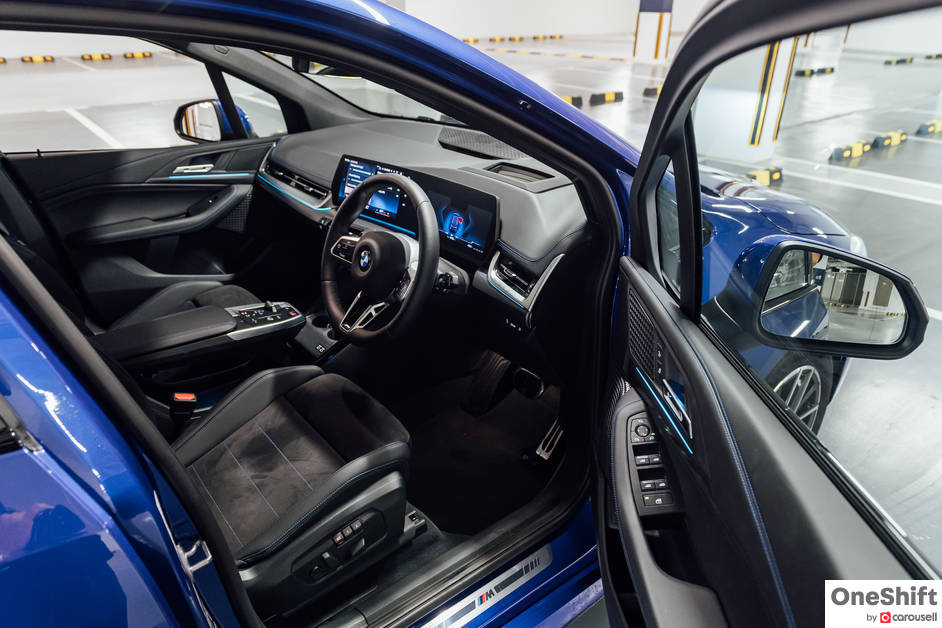 Settling into the drivers’ seat, you are almost immediately reminded of the iX’s cockpit, especially with its curved infotainment screen and floating centre console. The keen eyed amongst you might also notice that unlike the iX, the 2AT has given up its traditional rotary dial for a full touchscreen system for its iDrive OS 8 infotainment system. The system’s new design is refreshing and easy to navigate through. A neatly appointed search function ensures that any function can be easily found with the input of a few keywords. 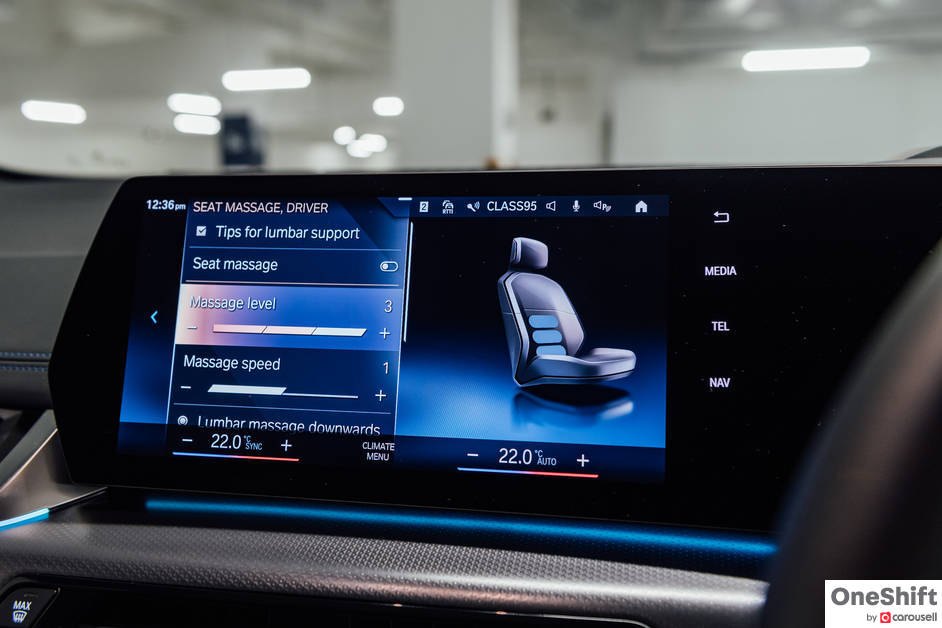 Being a special launch edition, our test car came with a panoramic roof, and seats with a massage function – a surprisingly nice level of spec for the 2AT, especially not being too far off the entry point into the BMW brand. 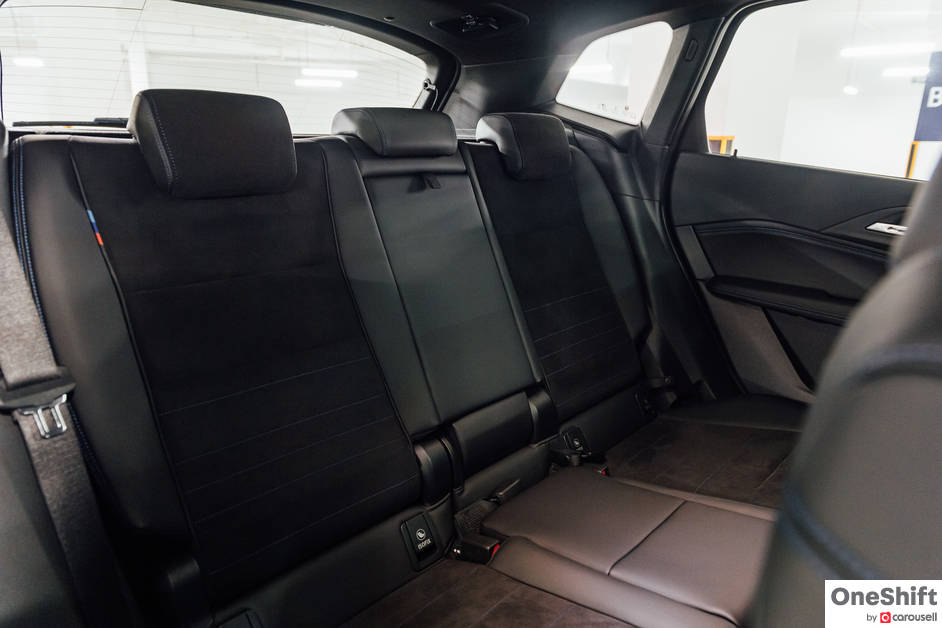 Oddly enough, I found myself wishing that I was driven around more in it than actually driving the 2AT, as rear legroom and headroom were in abundance. Tilt and fore and aft adjustments to the 40:20:40-split rear bench also made for good seating comfort on top of practicality. Its centre console has a neat cut out for passengers to place their feet through whilst sliding across the rear bench – a strong indication of the attention to detail paid by BMW when the 2AT was being developed. 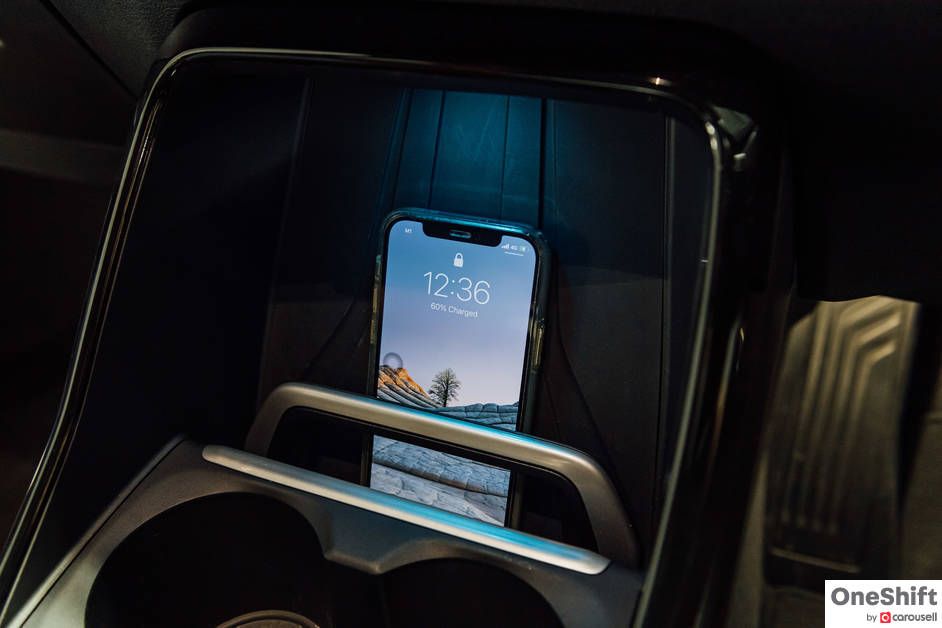 Shifting its pod-like gear shifter button into ‘D’, the 2AT took off with ease despite only being a 3-cylinder 1499cc motor with 136 bhp. Don’t be fooled by its capacity though – owing to its turbo-charged nature, the 218i feels zippy around town and has little trouble making overtaking manoeuvres, thanks to a very direct throttle feel and 230 Nm of torque available down low in the rev range. When pushed in certain ranges, the 2AT might sound a little rough, but thankfully with an engine note that doesn’t sound too unpleasant. 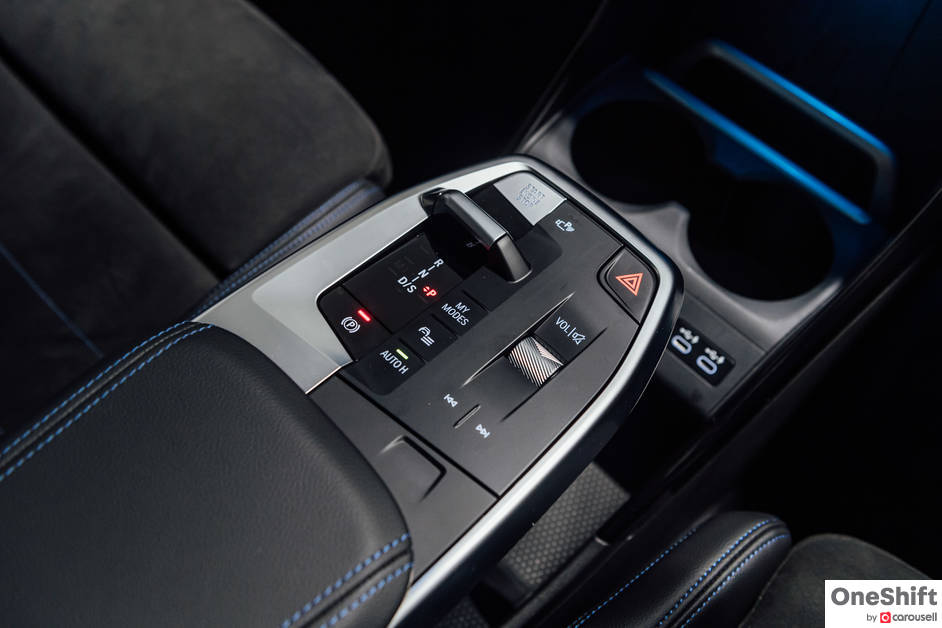 Its steering is light but accurate, and does possess hallmarks of what the marque is known for. The 2AT might feel a little harsh over certain surfaces, but we think that this was due to the run-flat tyres that our test car was specced with – nothing a simple swap to regular tyres couldn’t resolve. 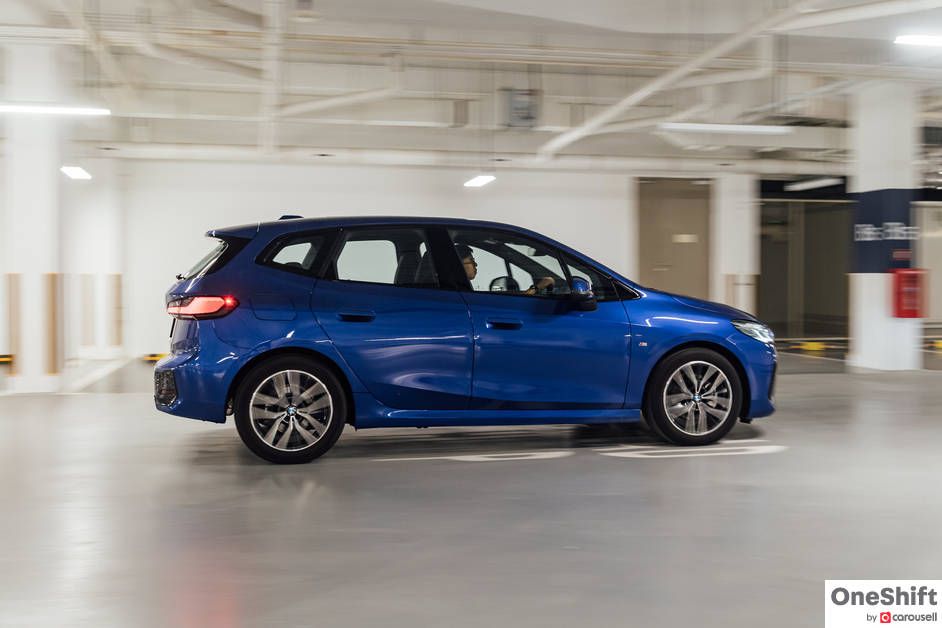 What else is new for this 2AT is its gearbox. Now paired to a 7-speed M-DCT dual-clutch box, its smoothness in the mid-range pays most dividend whilst on the go, where it swaps cogs seamlessly and quickly. For the careful route planners amongst us, experiencing its slightly unsettled nature at crawling speeds will be an extremely rare occasion. This bodes well too, for those whom are trying their best to minimise their running costs (especially in this environment of sky high fuel prices) – the 2AT managed to clock approximately 14km/l on the combined cycle during our testing, not too far off the claimed 14.4km/l figure. 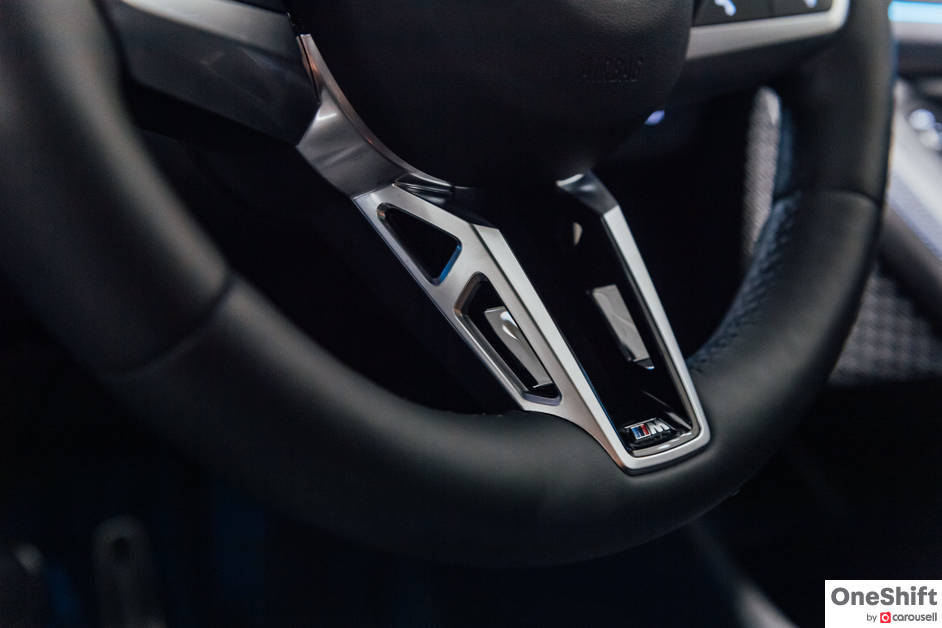 On the whole, we like the 2AT’s high build quality, attention to detail and genuine comfort for both driver and passengers alike. It’s a pity that this generation of 2 series will not be available in the real local hit – in Grand Tourer guise with 7 seats. BMW says that its decision to streamline the model range was due to global production numbers, though it will be too hard to believe if you were to ask any family man here. 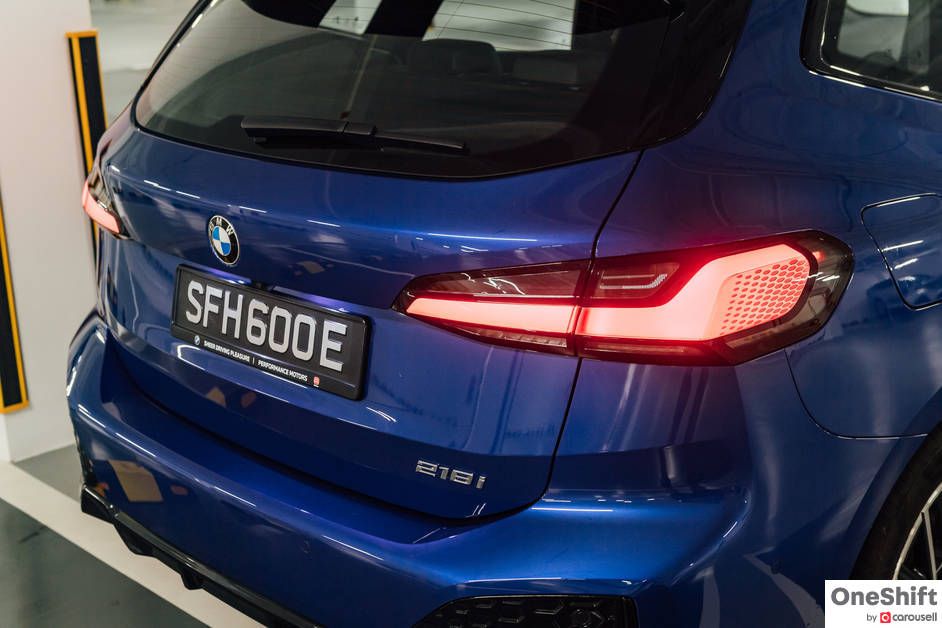 With prices starting at $220,888, we think that the 2AT is worth the premium over its closest rival, the Mercedes-Benz B-Class, which comes in at the sub-$200,000 mark. What you get with the 2AT is not just a practical family runabout but one of the first few models that would start the ball rolling for this latest BMW design-iteration, instead of one that merely takes inspiration from its bigger cousins. Now who said that BMW couldn’t make appealing FWD runabouts?