Ferrari 296 GTB Review: One Of The Best Daily Driver Ferraris The changing global landscape means that even the mighty Prancing Horse had to go green, and embrace hybrid tech. They aren’t going down the same route as the rest of the pack, though. Meet the Ferrari 296 GTB, the famed Italian automaker’s take on hybrids, and boy, is it the polar opposite of a Prius! They call it a sports car, but let's be fair; it's more of an entry-level supercar. 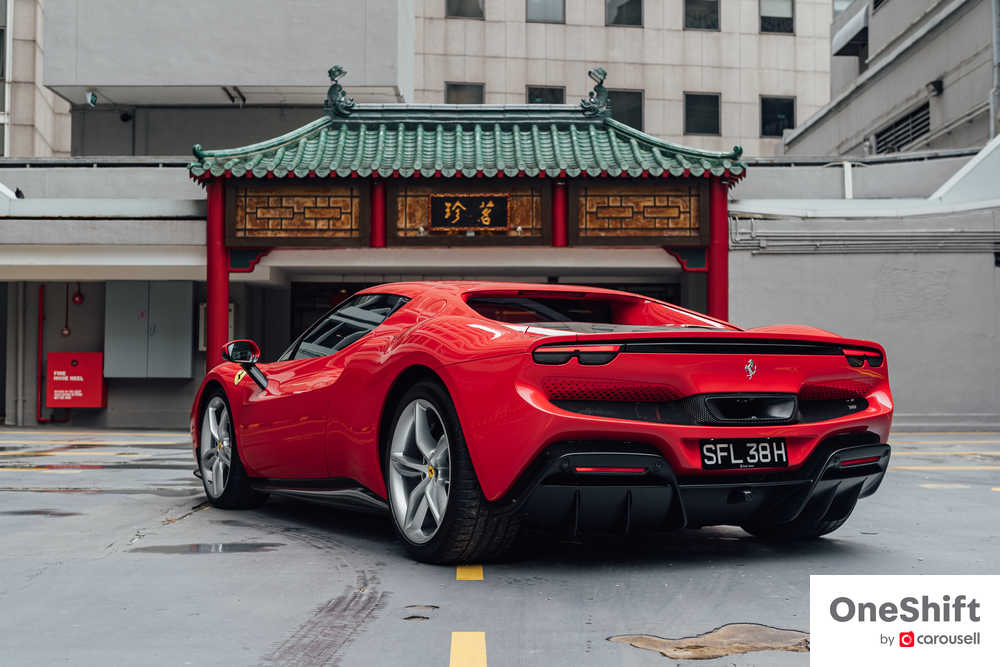 Ferrari calls it their ‘First Real V6 Ferrari’, in a self-aimed dig after the 70s Dino. Wrapped in a Centro Stile penned body, under the expert guidance of Flavio Manzoni, it looks like a Ferrari should and previews the brand's future styling direction. 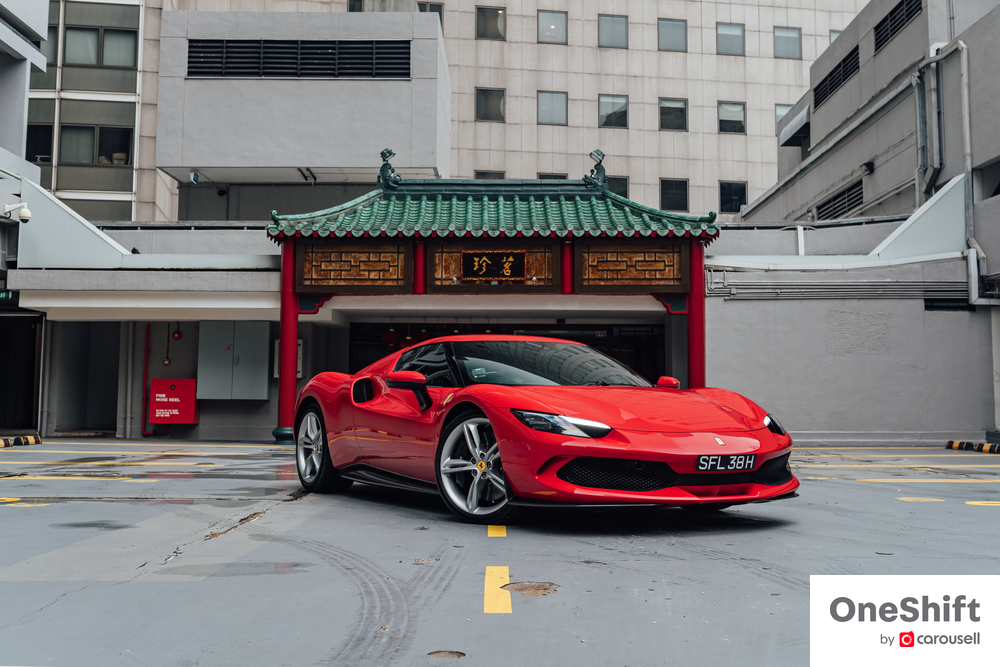 Some called it the “baby” SF90 and we are not surprised as technically they are sharing components. With the cost of the 296 GTB almost half that of the SF90, nobody’s complaining.

Don’t let the hybrid tag fool you. Much of the car’s system total of 819 hp comes from the twin-turbocharged V6 (654 hp to be exact). The electric motor adds a mere 165 hp to the game. All this culminates in zero to 100 km/h seen off in under three seconds, and the 296 GTB won’t stop until the speedo pegs 330 km/h. Flick the Manettino dial to Performance, Race, or CT-Off, and you can scare your passenger, and possibly yourself as well as the V6 wails to a very un-hybrid like 8,500 rpm. 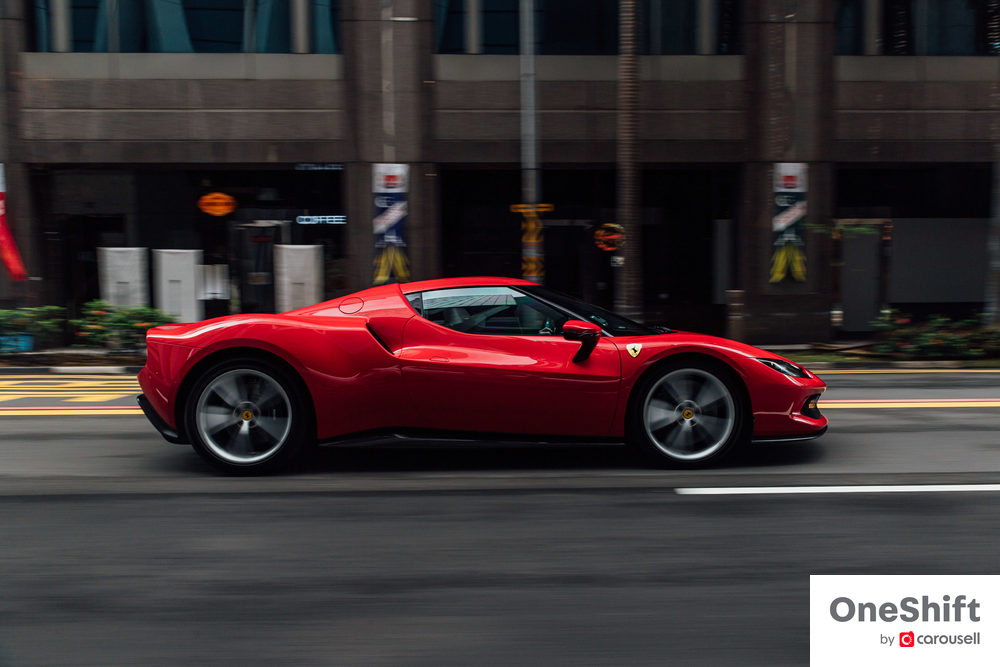 Let’s Have Some Tech Highlights

The 296 GTB represents the best technology from Ferrari’s wizards. Starting with the engine, the 120-degree vee design enables the turbochargers to centrally nestle, improving packaging. I do miss the iconic scarlet red engine that we are used to seeing in a Ferrari; the low-mounted engine’s vivid colour is mostly hidden. 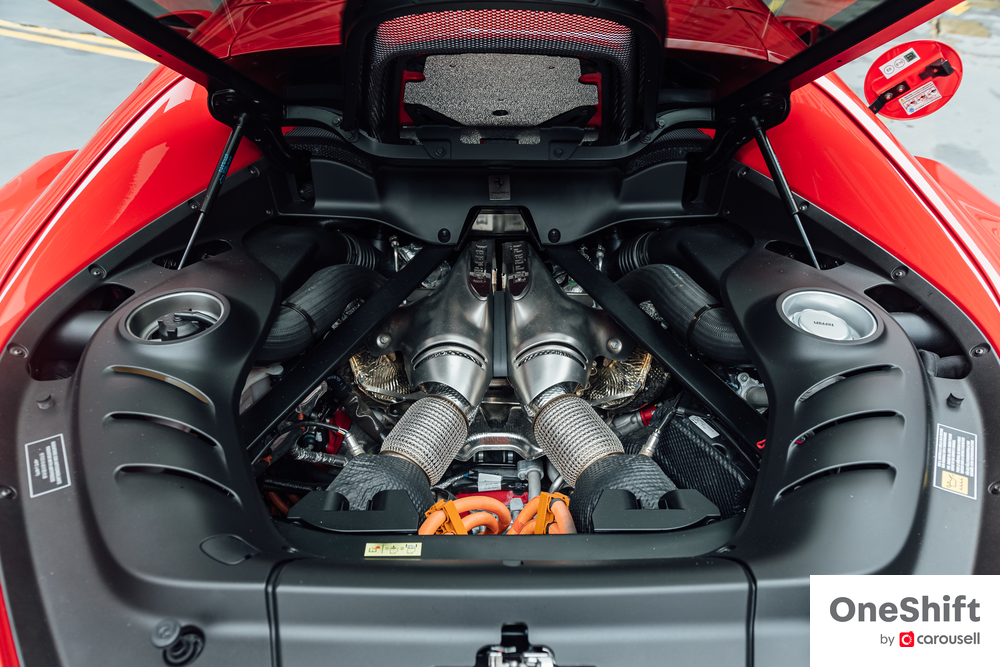 Of course, you've got variable valve timing, direct injection and all that jazz. However, a gizmo called a TMA actuator integrates the rear-mounted electric motor with the engine, resulting in that 819 hp output. Even the exhaust notes have been carefully crafted by Ferrari, and they call it their “little V12”. 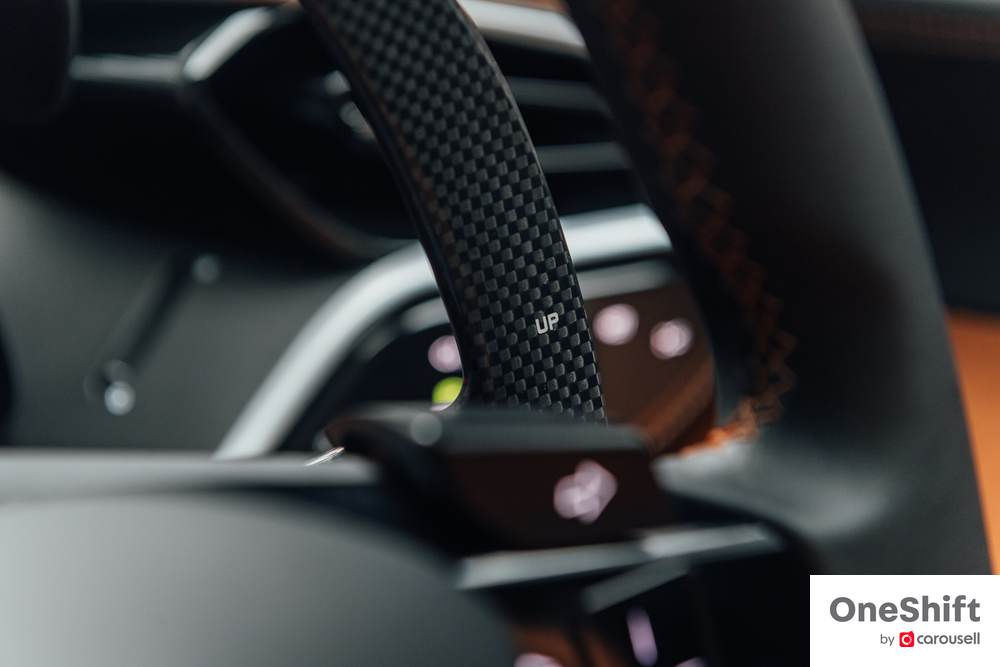 Of course, the 8-speed dual-clutch gearbox may not win the ratio race, when rather more plebeian metal packs nine or even ten cogs. Rather than sheer number of gears, Ferrari has focused on fine-tuning the box to deliver in-town tractability, delivered with whip-crack shifts on the track when you demand them. 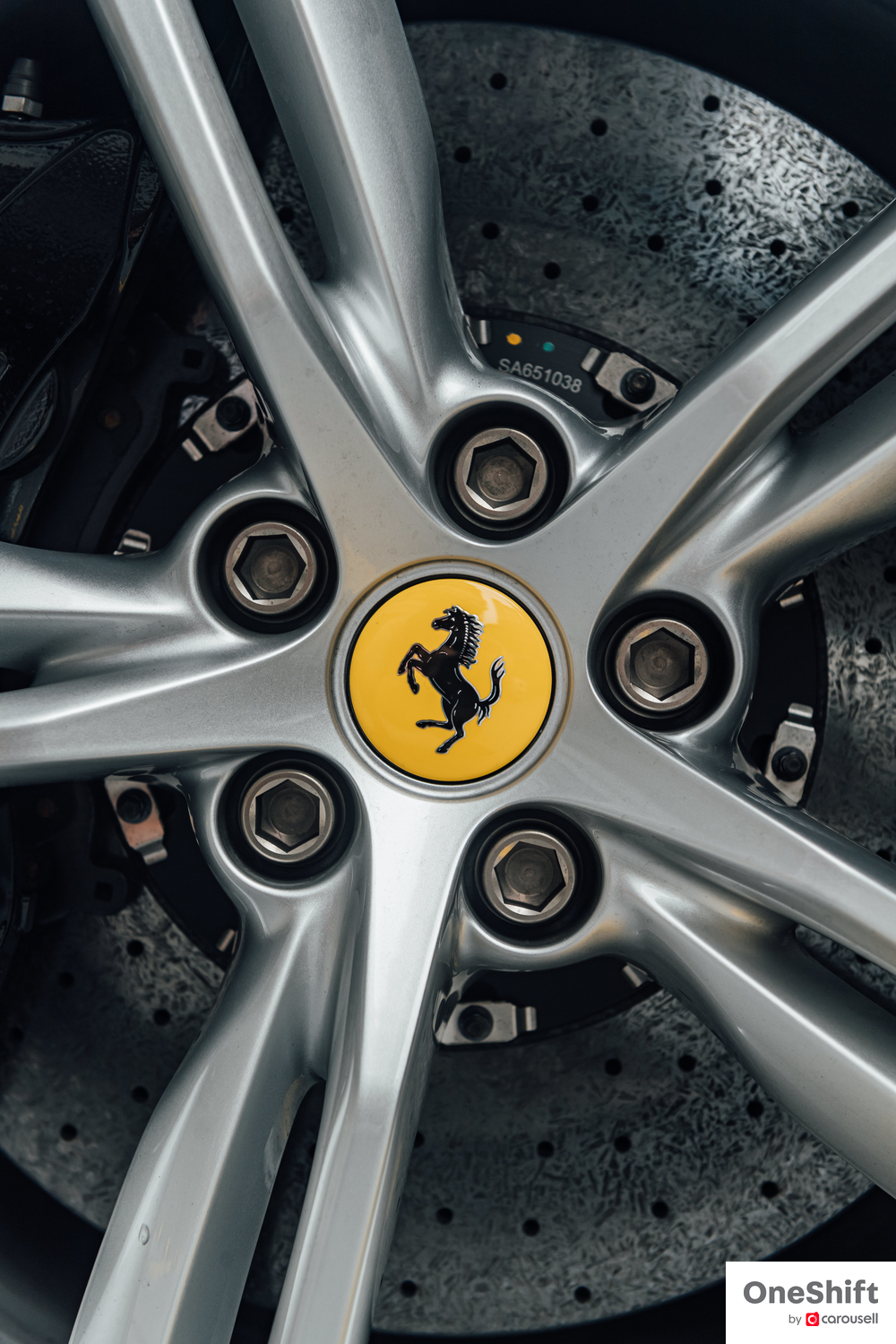 Braking is via the automaker’s latest ceramic brake disc technology, plus regenerative braking to capture spent energy and store it on board the 7.45 kWh lithium-ion battery. 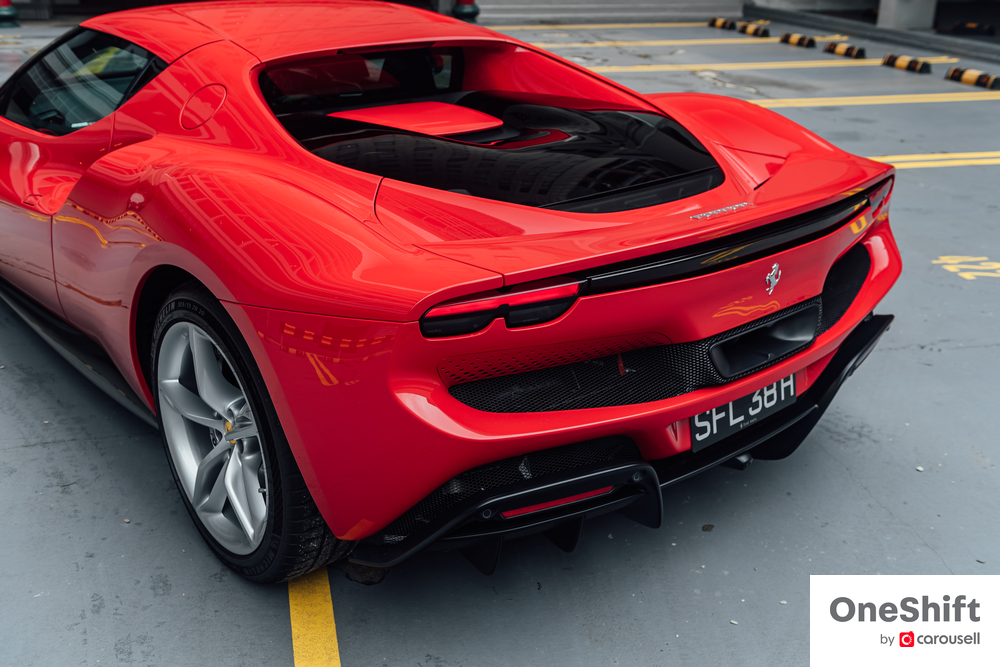 The missing piece is the iconic scarlet red engine that we are used to seeing in a Ferrari. Due to its 120 degree V6 configuration, the low-mounted engine’s vivid colour is mostly hidden. Instead, what greet you are two silver turbo-chargers.

What Does The Cabin Contain?

This is a pure two-seat Ferrari, and the driver is the main focus. However, the slightly terrified passenger does receive a little screen ahead of them that displays information. Ferrari refers to the pairing as ‘Driver and Co Driver’, perhaps as a distraction to the passenger who would otherwise be terrorized when all 819 hp is deployed. 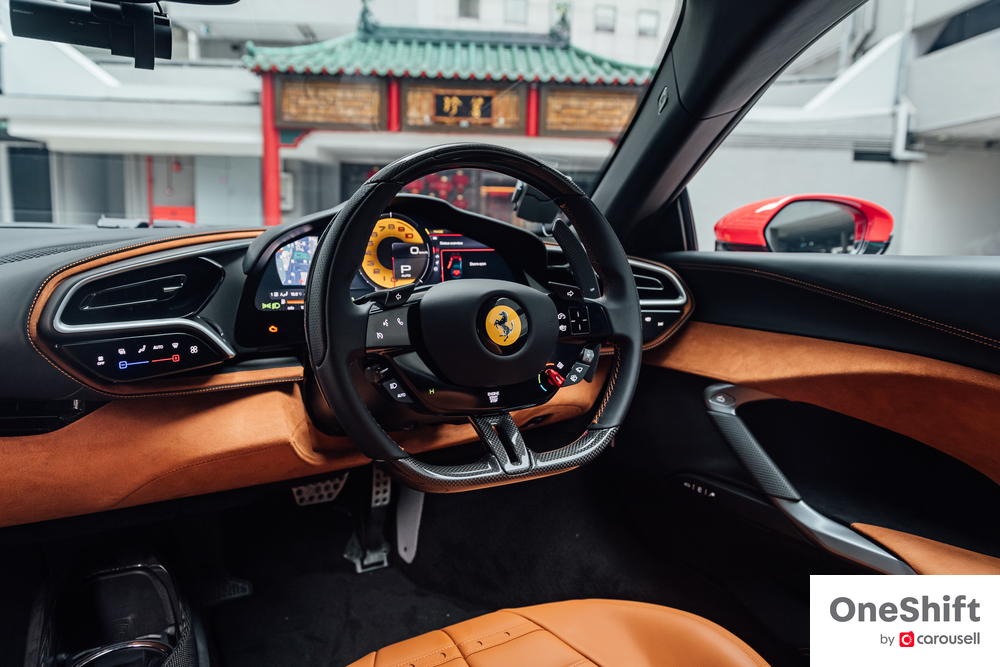 Else, it’s your typically 2022 performance car, with climate control, an infotainment system with smartphone integration, and powered conveniences. However, notice that there’s no centre screen. That’s because everything, infotainment included, displays on the instrument cluster. This can be a bit annoying, as you will lose the digital rendition of that iconic Ferrari rev counter when Apple CarPlay is active, for example. 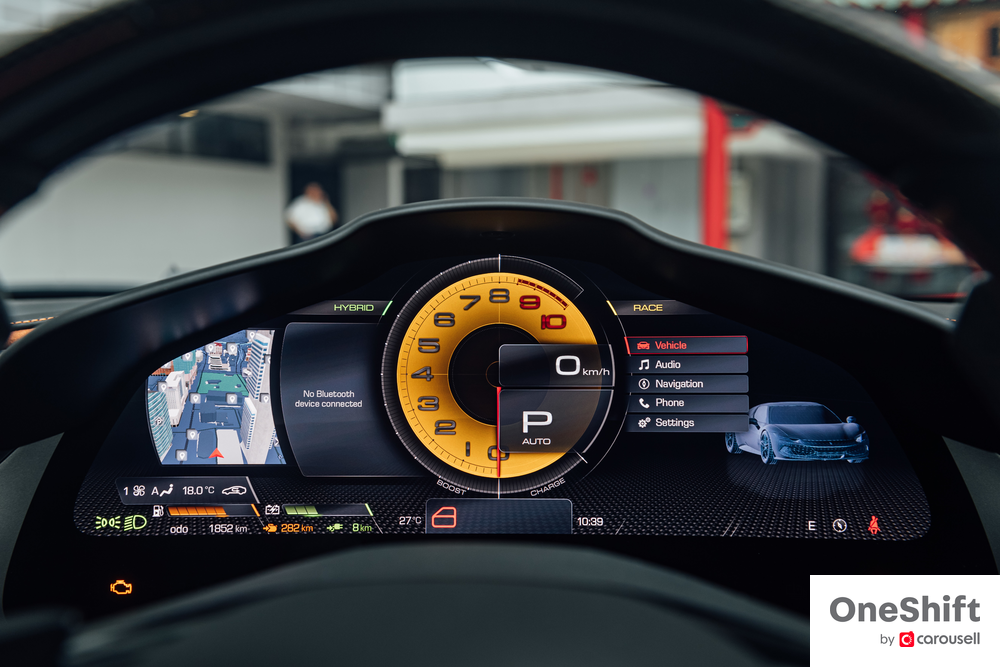 The steering wheel is extremely busy. There's the aforementioned Manettino dial, buttons for turn indicators, switches for wipers and headlamps, and touch-sensitive pads for the infotainment system. No column stalks. The wheel does it all. 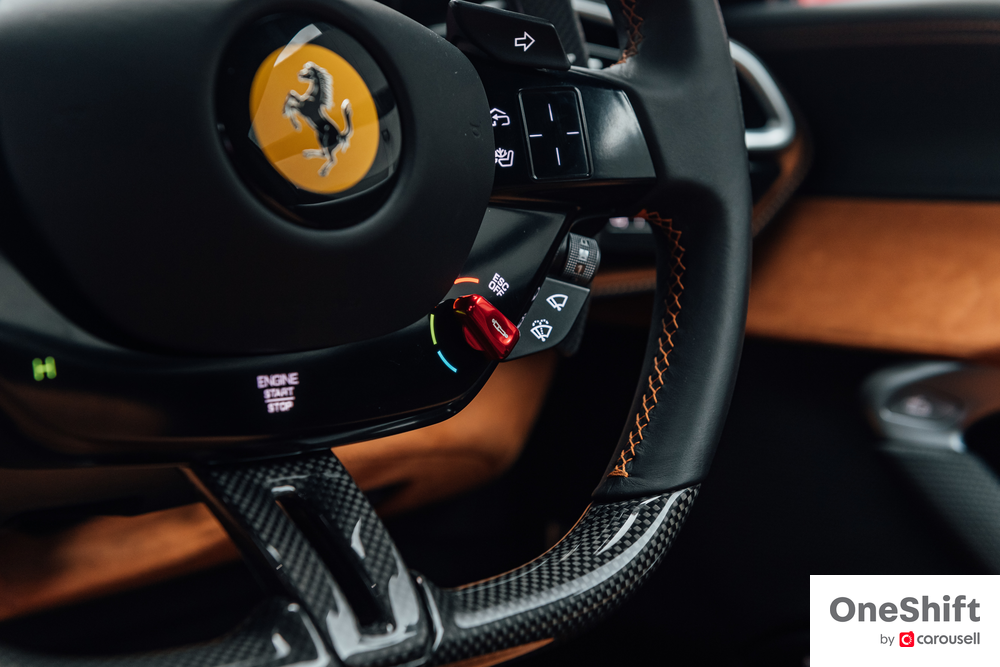 Oh, the paddle shifters are column rather than wheel mounted. This means that they do not rotate with the wheel, so you need to re-learn how to paddle shift if you’re coming from a car with wheel-mounted paddles.

How Practical Is It As a Commuter?

Let’s forget blasting down the track or winding back roads for now. Life has caught up with us. And, the Ferrari 296 GTB can do the practical game to a certain degree, for what is essentially a two-seat 819 hp road rocket. When at town speeds, the V6 hums away, and you can even cruise purely on the electric motor for 25 km at speeds of up to 120 km/h when you select EV on the Manettino. The sharp steering with just two turns lock-to-lock takes some getting used to but feels very intuitive once you do, albeit a bit heavy for town use. The nose lift function also helps you handle speed humps at a sedate speed. 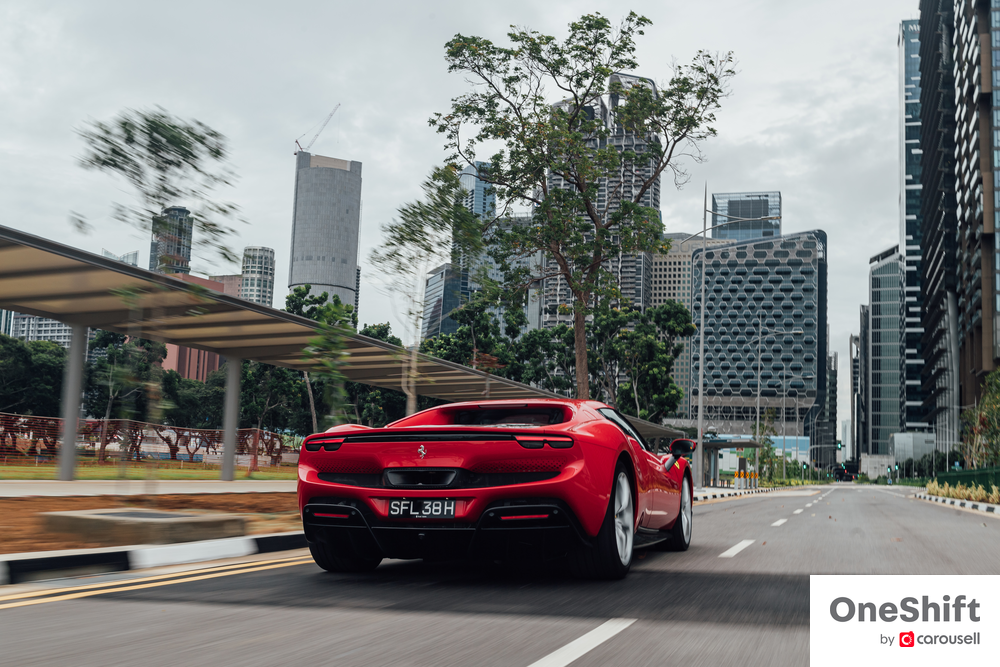 What about luggage? There's a front trunk, or "frunk," that's ample for your groceries and a couple of soft bags for a weekend trip for two. Ferrari doesn't really specify how big it is, so an IKEA trip is off the cards, then. 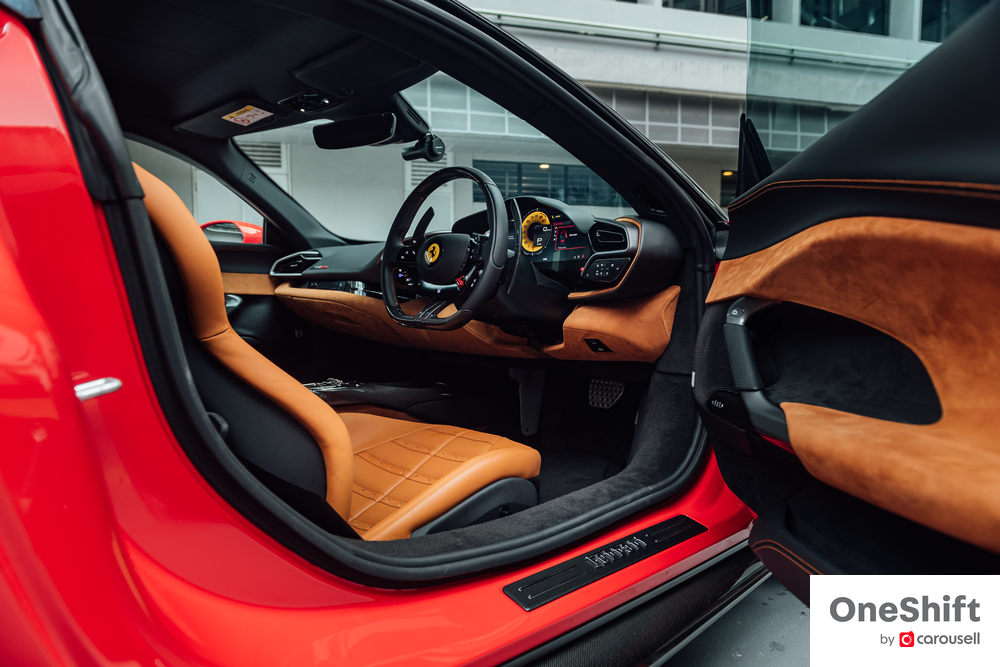 Can I Transport Kids In It?

The short answer is it depends. The 296 GTB’s got only two seats. If you want to transport a kid (singular, not plural) in the 296 GTB, the aforementioned child should be old enough to sit unaided in the front seat of a vehicle and wear a seat belt. The kid will have the time of their life, though. 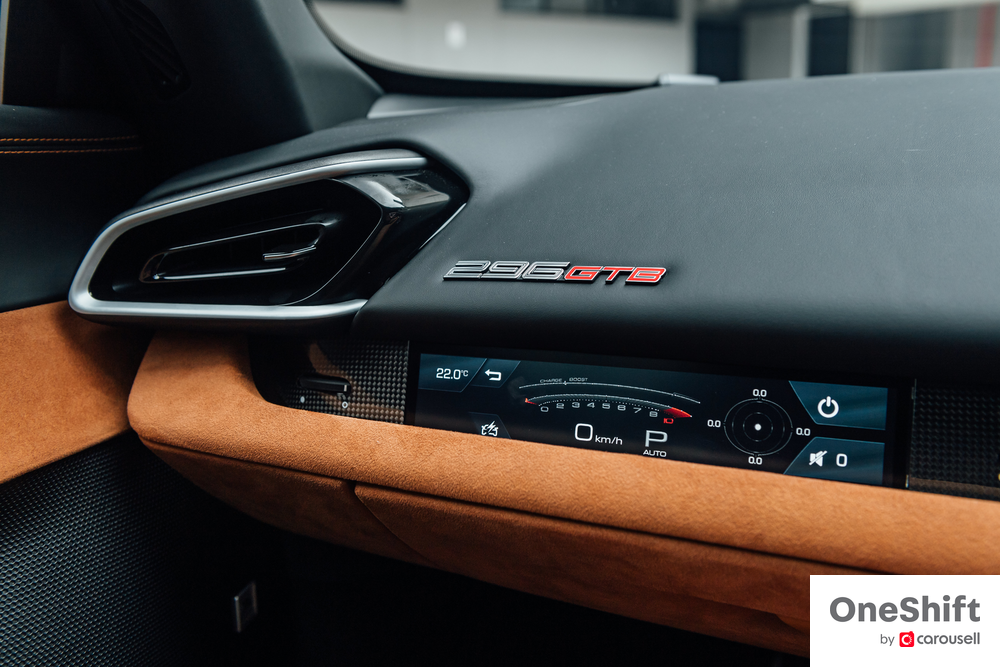 If you’d like to throttle the 296 GTB down your favourite track in anger, rest assured that it can handle everything you throw at it – and more. The engine wails to its stratospheric redline, belying all forced induction norms. The 8-speed gearbox turns into a whip-crack affair each time you pull a paddle and call for a shift. 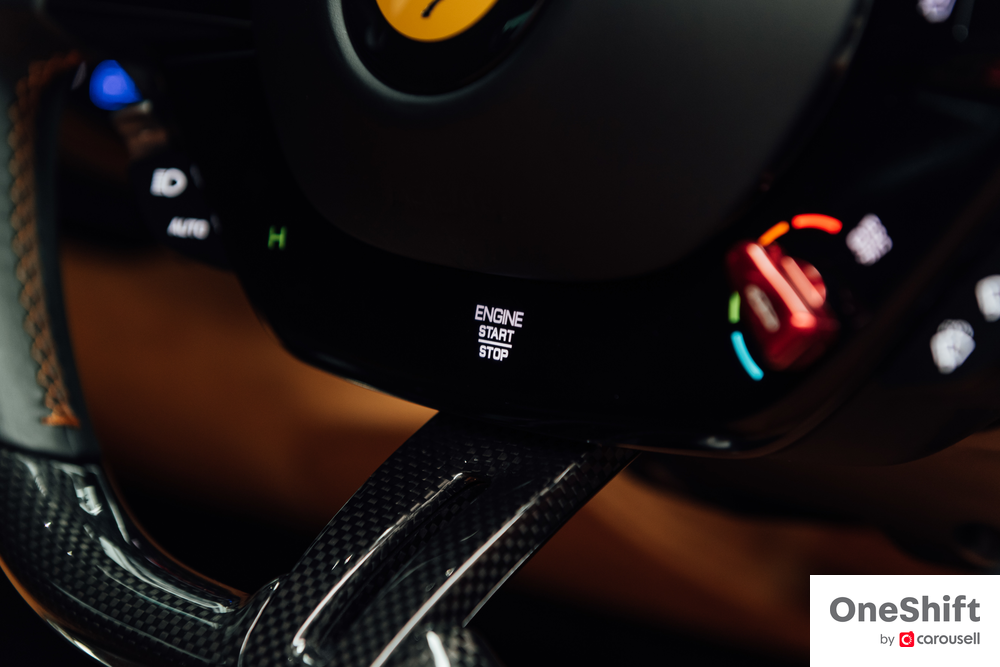 Switch the Manettino to CT-Off and you’ve unlocked the most hardcore realm, where although the stability control is watching, it won’t step in too early like an overeager nanny. Ludicrous slides are at your disposal, as is face-bending grip if you choose the scalpel over sledgehammer approach. 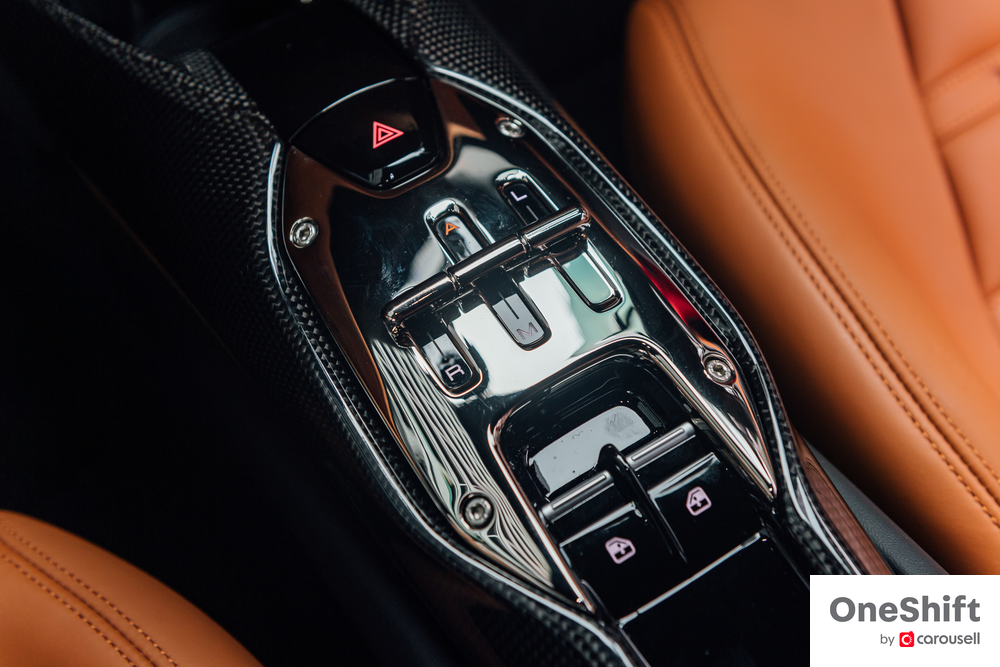 Those monster brakes are always responsive to how far you bury the brake pedal, blowing off speed in a fuss-free manner, and it’s here that the slightly heavy nature of the electric power steering makes sense when every minor correction has the potential to shave off tenths from your lap time. 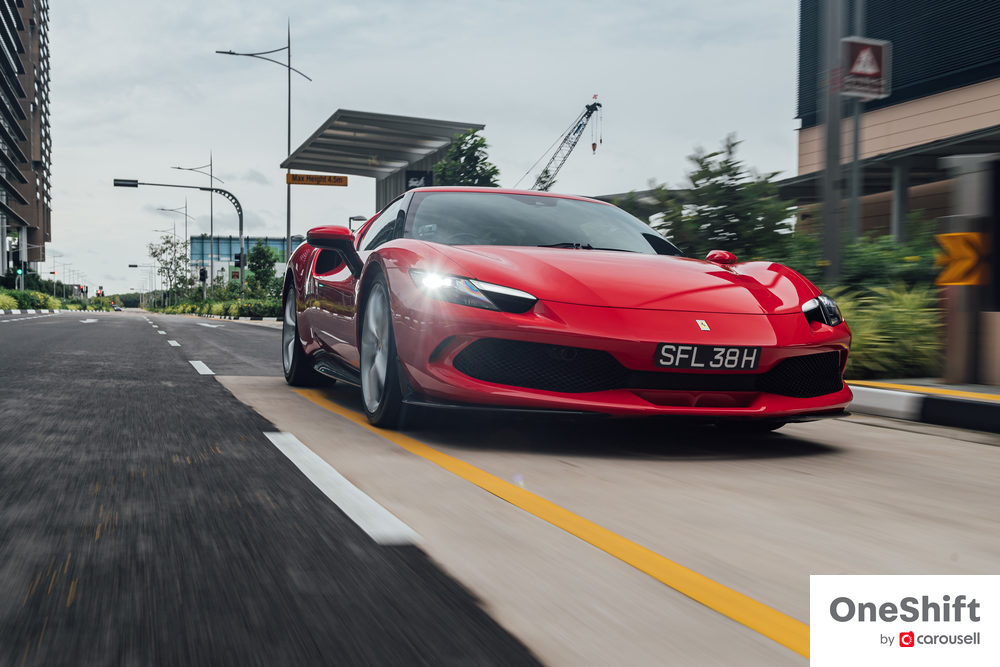 The 296 GTB is not a family carrier, that’s for sure. However, it is a surprisingly easy car to drive and no drama during parking even in multi-story carparks. If you need to take one of your kids to a dance rehearsal or pick up from school, the 296 GTB can handle it, while turning heads.
This is a daily driver I definitely don’t mind having. The Suzuki Ignis feels so right for our little island. Here's why.