Share
At almost $150,000 less than its RS big brother, the e-tron GT is a great value proposition if RS sporting credentials aren’t your biggest priority when it comes to joining the e-tron fraternity. What’s more, this gives a tad more freedom to make one's mark on the options list.
What we like:
&lt;p&gt;Still blazingly quick
genuinely soothing place to spend time in
looks cooler than ice (if that's even possible)&lt;/p&gt;
What we dislike:
&lt;p&gt;The e-tron or e-tron Sportback might be more useful for hauling loads&lt;/p&gt;

No, we won’t blame you if you aren’t able to tell the difference between this e-tron GT and its RS-versioned big brother at first glance. Getting the elephant in the room out of the way, less for a couple of badges, concave-style rims and the outstandingly bright orange brake calipers hugging those Audi Carbid discs, it would be quite difficult to tell the two apart in the flesh. This is quite different from what one would typically expect in making a comparison between RS and non-RS versions of the same Audi, and that’s definitely not a bad thing! 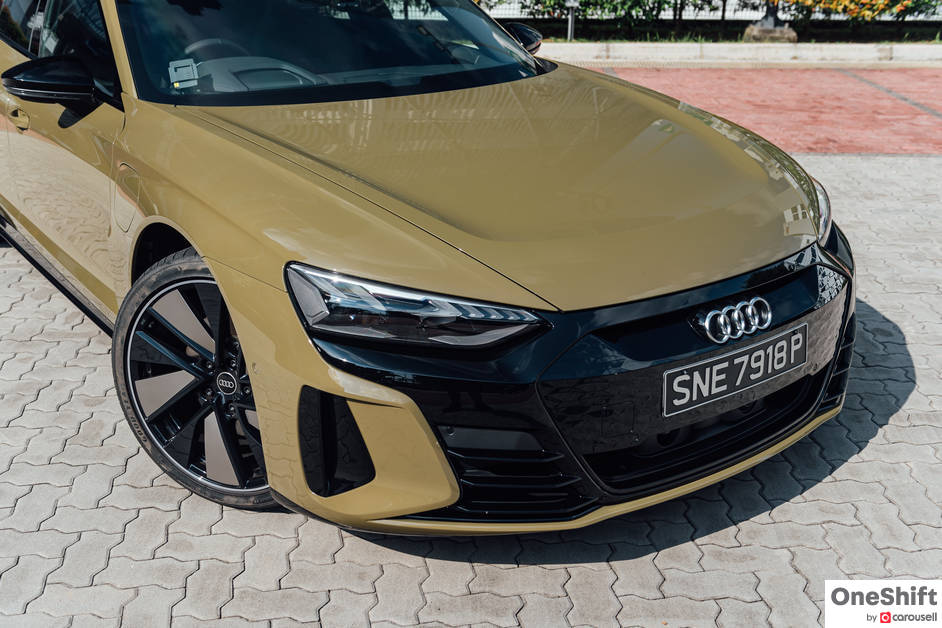 We’ve already established in our previous story that Audi’s take on a fast GT-styled BEV very much has its own unique identity despite sharing the same platform on which the Taycan is based. Think sharp-edged sports car athleticism from the Porsche compared to the soothing, yet calmly delivered nuclear-like power from the Audi.

The same theme carries on through to this non-RS versioned e-Tron GT. By right, being part of the regular, family-friendly lineup of Audis, one would expect this e-tron GT to be rather docile compared to its blazingly quick RS sibling. It possesses the same twin-motor set up as in the RS-version but has its programming re-worked to give it 469 bhp (or 522 bhp on boost). That’s about 122 bhp less than its big brother but mind you, still far from a small amount of power to be putting down onto the road. Pressing its starter button and merely tapping on its throttle pedal – those expectations of being a tame to pilot would almost be thrown out the window. 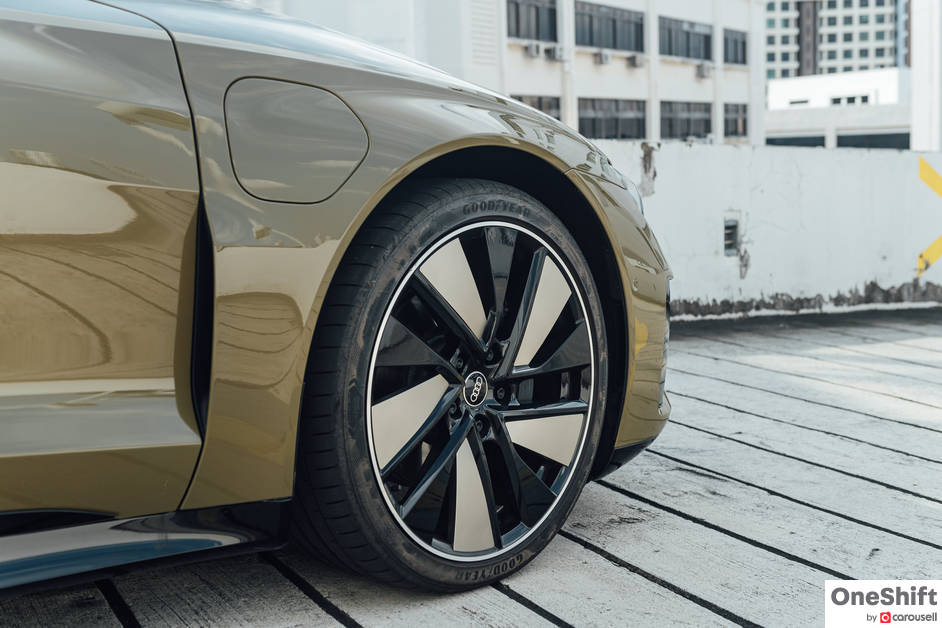 The e-tron GT covers ground with a spellbindingly quick pace. To give some reference, it completes the century sprint in 4.1 seconds, just 0.8 seconds off the RS’s record. And being a BEV with instantaneous delivery of torque, you’d struggle to find much else on our roads (less other BEVs of course) that sets off from the lights as quickly. 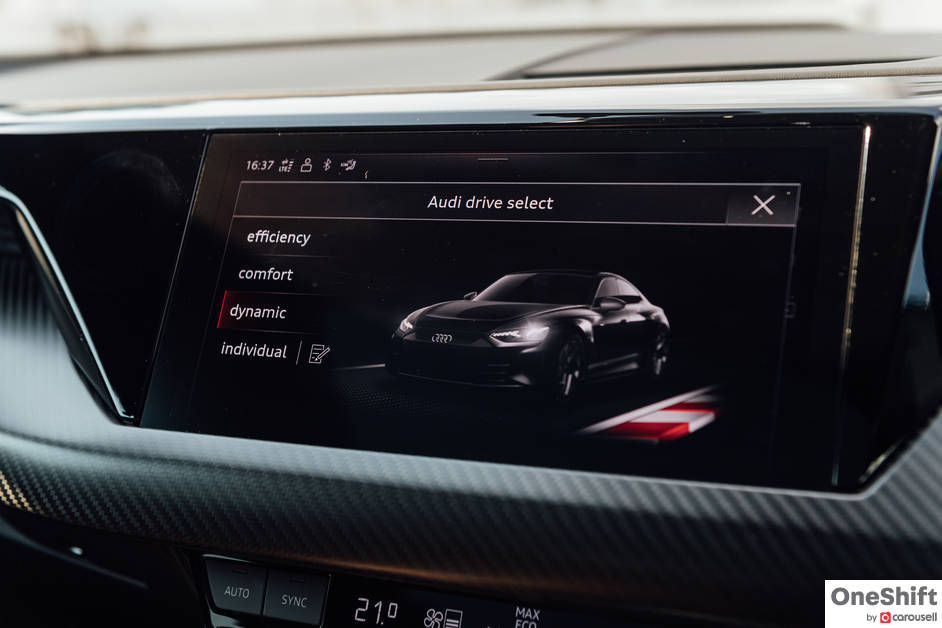 Sure, the adaptive air suspension that gave the RS its magic carpet ride is now an optional extra, and you’d have to make a check on the options sheet to spec your e-tron GT with an electronically controlled rear differential lock – but having driven the GT on the daily commute, this difference is far from noticeable, unless you’re Walter Röhrl on a rally stage and constantly moving on edge. 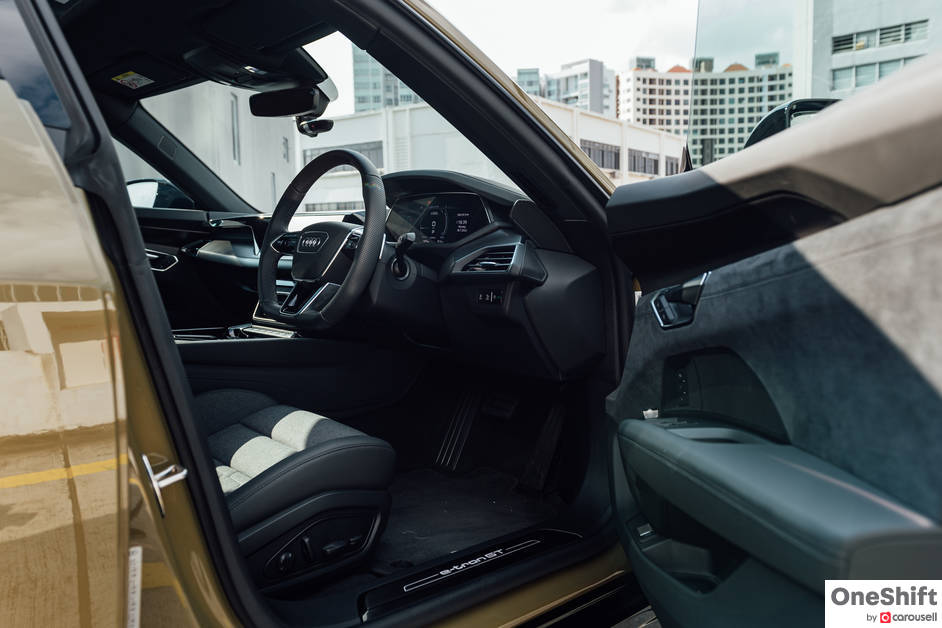 It steers sharply and accurately, not as sports car-like as a Porsche but with just enough feedback to make you feel like you’re in full control. As the days of our time with the e-tron GT went by, the more we felt that the engineers at Audi made it a point to imbue it with its own character. It’s like an everyday sports tourer being given an extra dose of ‘everyday-ness’ – settling into one's routine without much fuss.

Externally, there’s no mistaking that the e-tron GT belongs to a more performance-oriented category of BEVs – with its sharp looks, low slung roofline and wide stance, this interceptor from Ingolstadt makes you feel that you are piloting something that’s thoroughly modern and from the dawn of the new and upcoming age of electrification. It certainly commands great on-road presence. 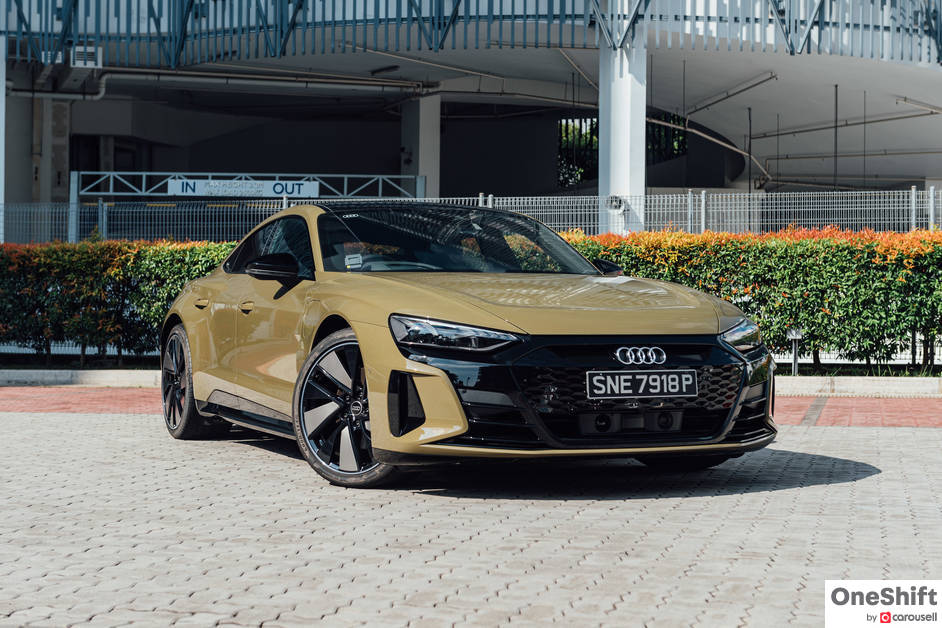 Actually, we struggle to find an angle from which the e-tron GT doesn’t look at all pleasing; that aggressively styled front end with Audi’s signature trapezoidal (faux) grille and cooling ducts and its swooping rear roofline that manages to flow right into and give rise to those muscular haunches. Even Audi describes their gran turismo as having been shaped by the wind – quite literally though, as the sum of its aerodynamic features extends its range by up to 30 km. 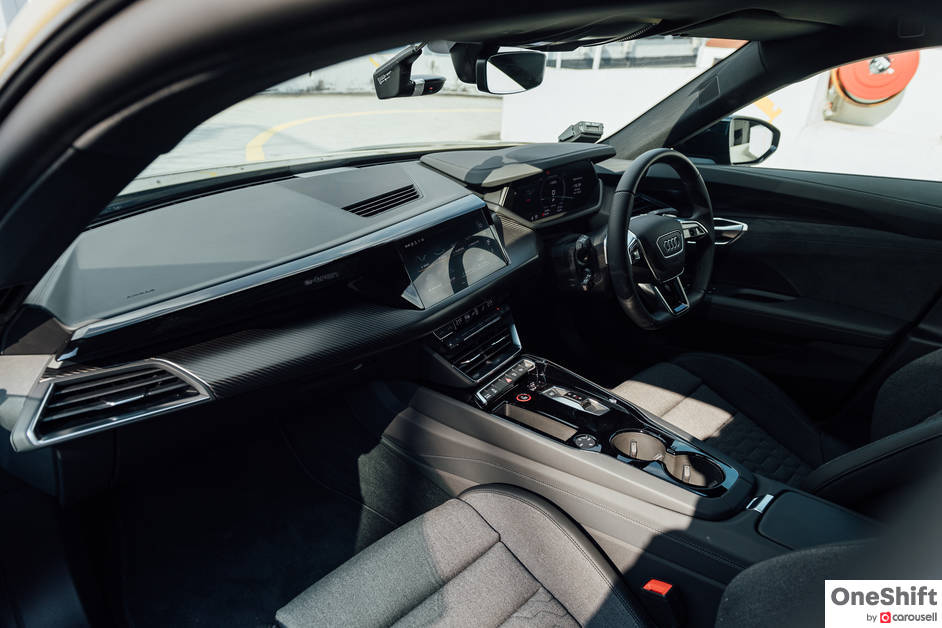 Inside, you sit low to the ground, cocooned and hugged by eco-consciously, upholstered sports seats. With each ‘Kaskade’ seat cover – a sail cloth like material that feels similar to the material found on luxury watch straps – being made of about 120 recycled plastic bottles, you are almost entirely assured of having opted for the choice that sits best with mother nature. The e-tron GT’s cabin is a genuinely calming place to be in, one that I can imagine easily spending hours on end, as you’d expect of any grand tourer. 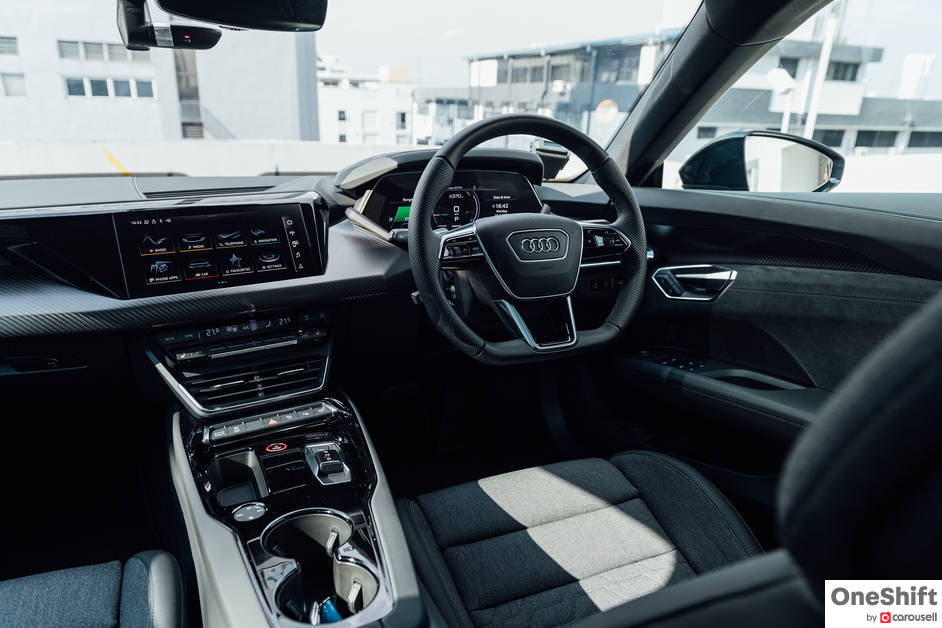 It has the usual, excellent combination of touchscreens and physical buttons. And we’re always thankful for designs that aren’t overly obsessed with touchscreens for almost every single control. Audi’s MMI is a breeze to navigate through and almost feels second nature swiping through each of its menu screens. 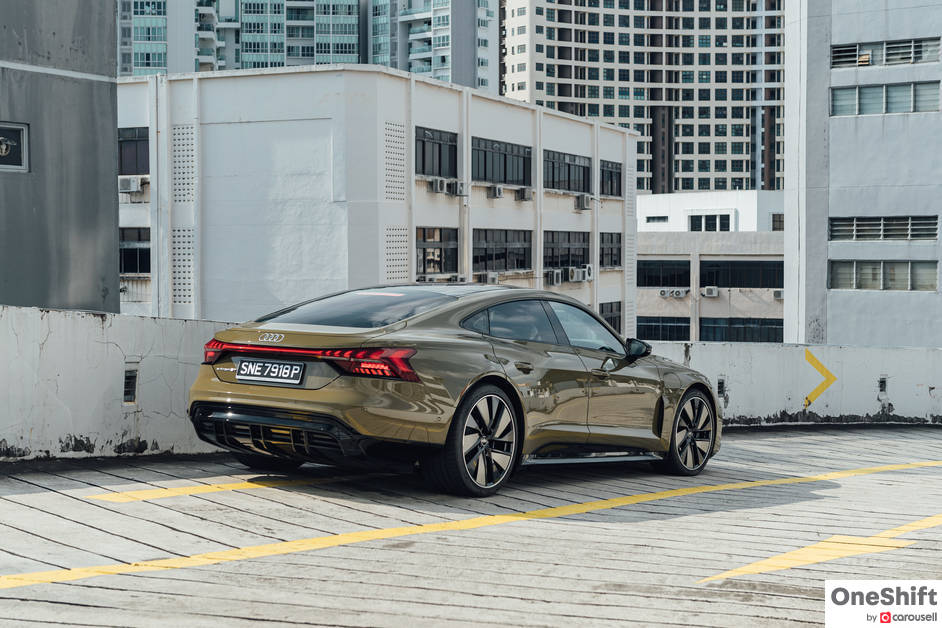 What’s our verdict then? At almost $150,000 less than its RS big brother, the e-tron GT is a great value proposition if RS sporting credentials aren’t your biggest priority when it comes to joining the e-tron fraternity. What’s more, this gives a tad more freedom to make one's mark on the options list. With more than 400 km of range available on a single charge, it also opens up the possibility as a decent choice (or option) of travel for cross-border trips to our neighbour's capital city. Not bad for a 2.3 tonne BEV that feels nothing like its weight. All being said, the Audi is a hugely capable and attractive car, and definitely is a great showing of what progress through technology is, and can be. Vorsprung Durch Technik.