Hot hatches are aplenty &ndash; can the Mini JCW Clubman prove its worth with its iconic looks and JCW wizardry? Share
With a 0-100 km/h timing of 4.9s, the JCW Clubman is the fastest model in the current Mini model line-up.
What we like:
&lt;p&gt;Quirky wagon sensibility
rear barn doors
performance (when demanded)
go-kart handling
civilised (for daily use).&lt;/p&gt;
What we dislike:
&lt;p&gt;Lacking electric front seats; rear backrests are too upright.&amp;nbsp;Almost nothing else really.&amp;nbsp;&lt;/p&gt;

When the modern iteration of the Mini Clubman was launched in 2007 by the BMW Group, I thought it looked fantastic. It was immediately recognisable as a Mini, better looking than the 3-door in my opinion, but it provided the practicality of a wagon. In fact, the car’s roots could be traced back to the original Morris Mini Traveller (or the identical Austin Seven Countryman) from 1960. 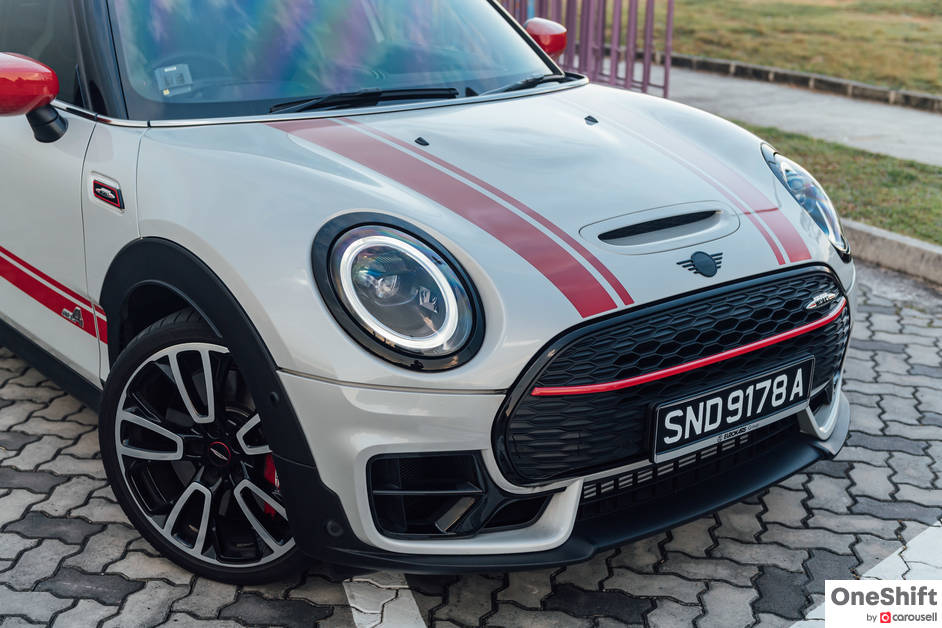 Most Singaporeans would not have seen many units of the 1st generation modern 2007 Mini Clubman on local roads due to a major flaw – rear suicide doors that opened directly onto traffic. As great and interesting as the design was for a lifestyle car, the suicide doors were only found on the right side whilst the left side retained a single door. This interesting design was suited for LHD traffic where rear passengers could get off onto the sidewalk conveniently. For RHD traffic, rear passengers either had to climb out from the left like a coupe or get out onto traffic on the right. 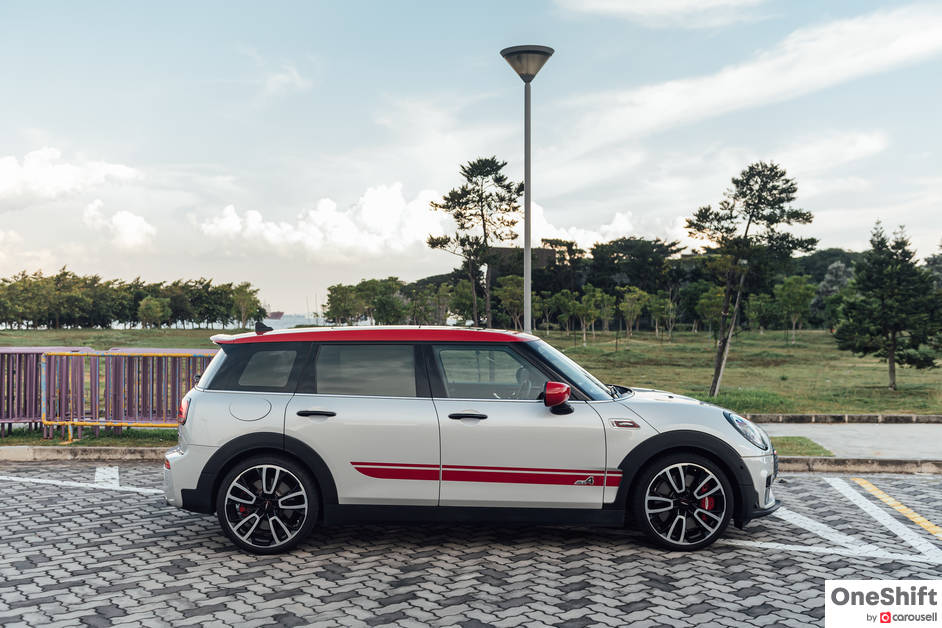 Luckily, the 2nd generation Mini Clubman ditched the suicide doors but retained the unique barn doors at the rear which stays true to its heritage. The 6-door Clubman tested here is the facelifted model, and it is the top-of-the-range John Cooper Works version. For the unfamiliar, JCW for Mini is the equivalent of AMG for Mercedes and M Division for BMW (think fast, loud and everything sporty). 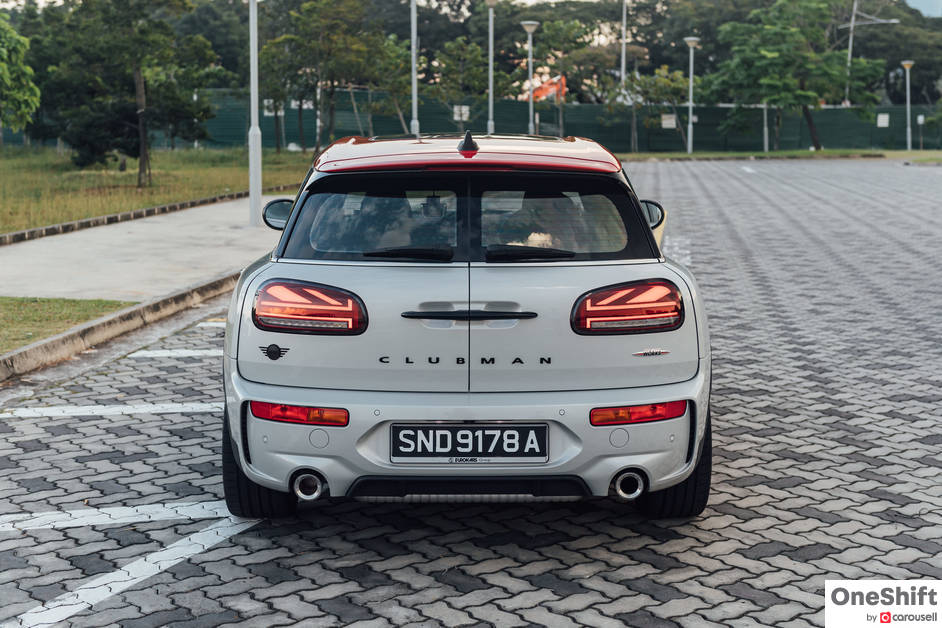 I was truly excited to test the Mini JCW Clubman to see if it could deliver both performance and practicality in a single package. 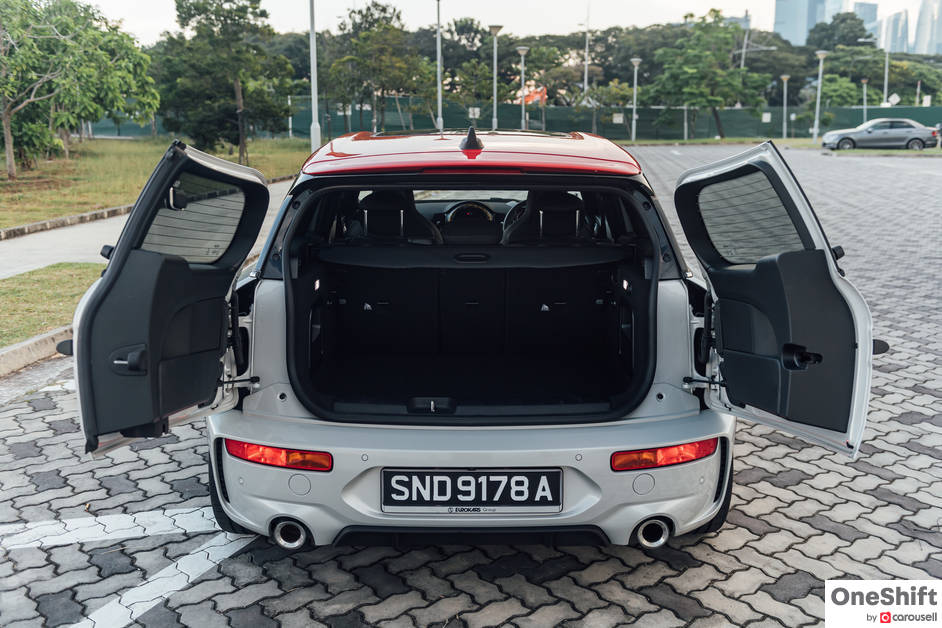 Walking up to the JCW Clubman, it looks like a longer and wider wagon version of the 3-door. The Clubman looks more proportionate and has a higher cool and quirky factor, but to each his own. The design and size of the Clubman makes this JCW version even more of a Q-car with a high stealth factor. To the untrained eye, it is just another Mini with a 2-tone paintjob and matching bonnet and body stripes. 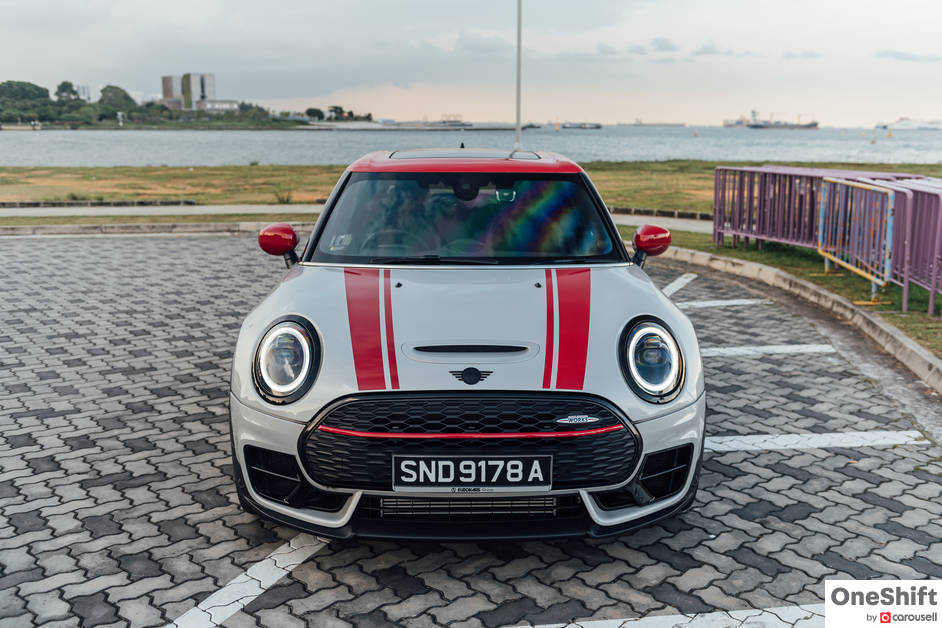 The JCW Clubman even comes with black trim and all the Mini brand badges. The CLUBMAN model script, door handles, headlamp and taillight surrounds are all black to match the black roof pillars. The taillights on this facelifted model also features a Union Jack flag – staying true to its British roots! 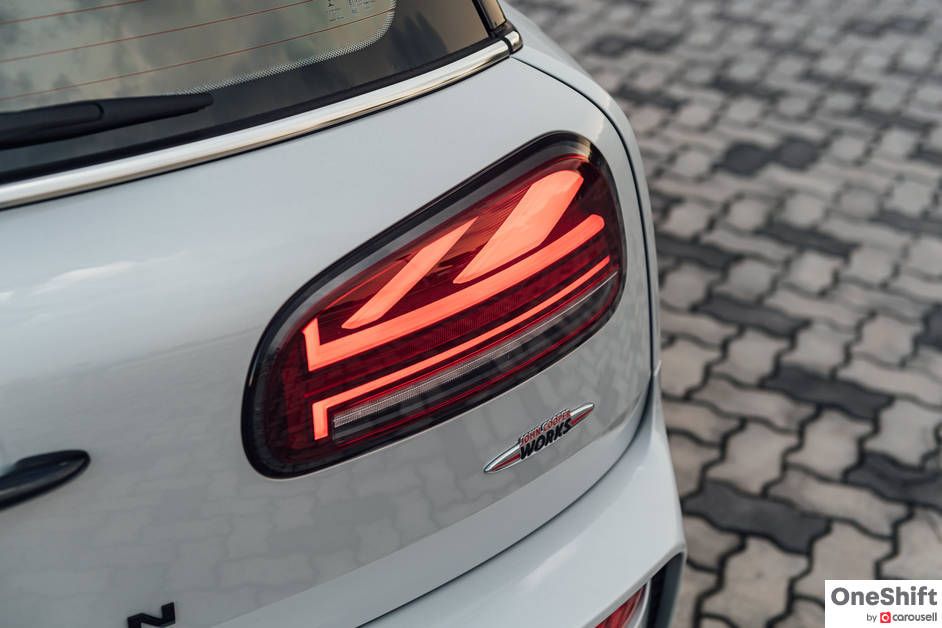 The car looks best from the front and rear side profiles where you get to see all its design elements together. It looks great in this combination of ‘White Silver’ paint with its contrasting red roof and black roof pillars. 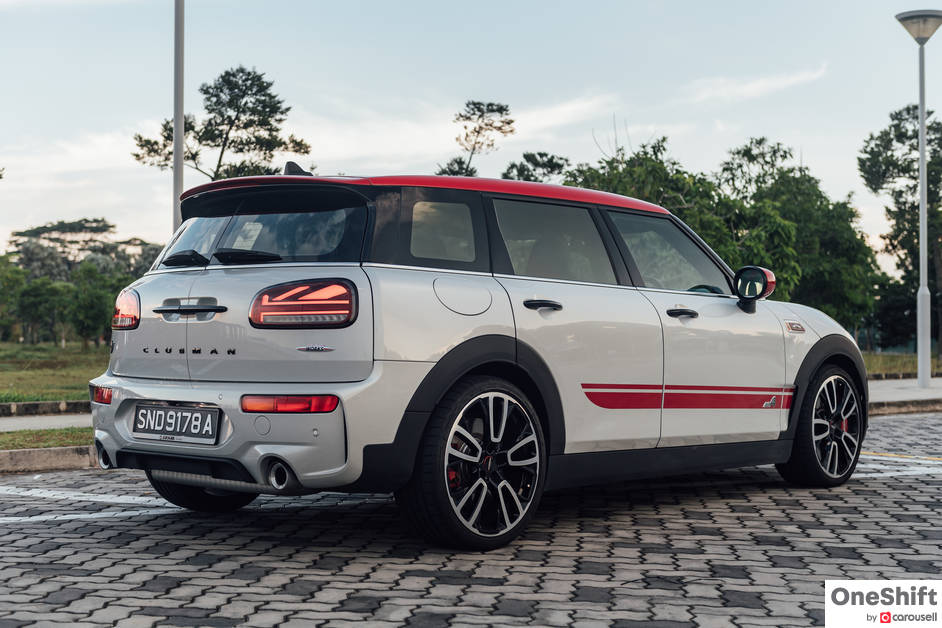 Look closely and one will realise that it comes adorned with ‘John Cooper Works’ badges all-round. The car even proudly wears an ‘ALL4’ badge hinting its AWD system. Behind those 19” JCW Circuit Spoke rims hides massive 360mm 4-pot brakes at the front and 330mm brakes at the rear that hint at the potential of this car. At the back, 2 large 95 mm sport exhaust tailpipes look subtle but are engineered to serve a defined purpose. 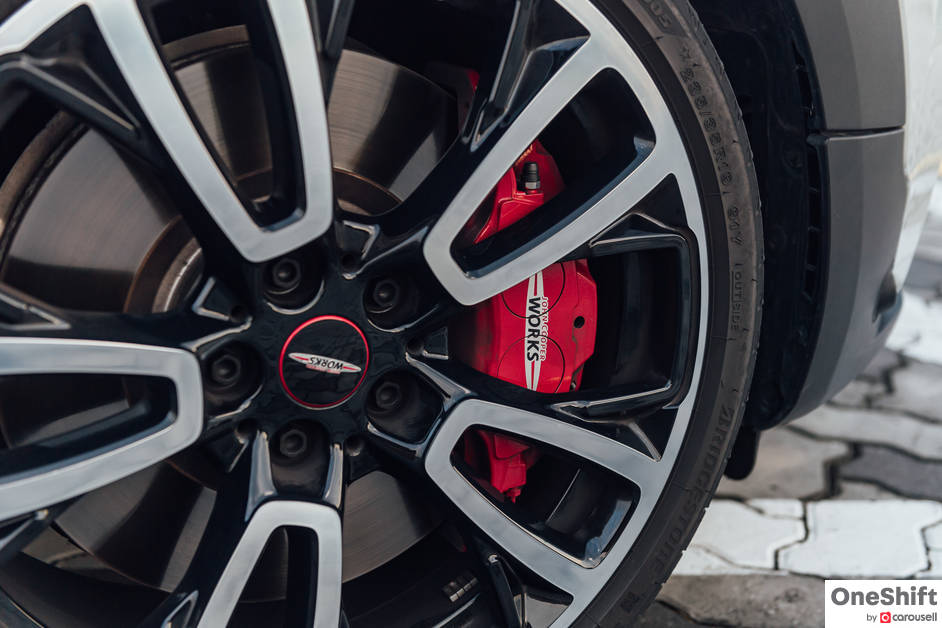 Start the engine and the value proposition of the JCW Clubman comes alive with a burble before settling down at idle. The redesigned turbocharged 2-litre engine produces 75 hp more than previous iterations and is rated at 306 hp and 450 Nm. Put the car in Sport mode and the exhaust note can be heard immediately but with all modern cars, it is likely to be a combination of the exhaust valves opening and the synthetic noise created by sound engineers. With a 0-100 km/h timing of 4.9s, the JCW Clubman is the fastest model in the current Mini model line-up. Yes, it is faster than the track ready JCW GP that does it in 5.2s! 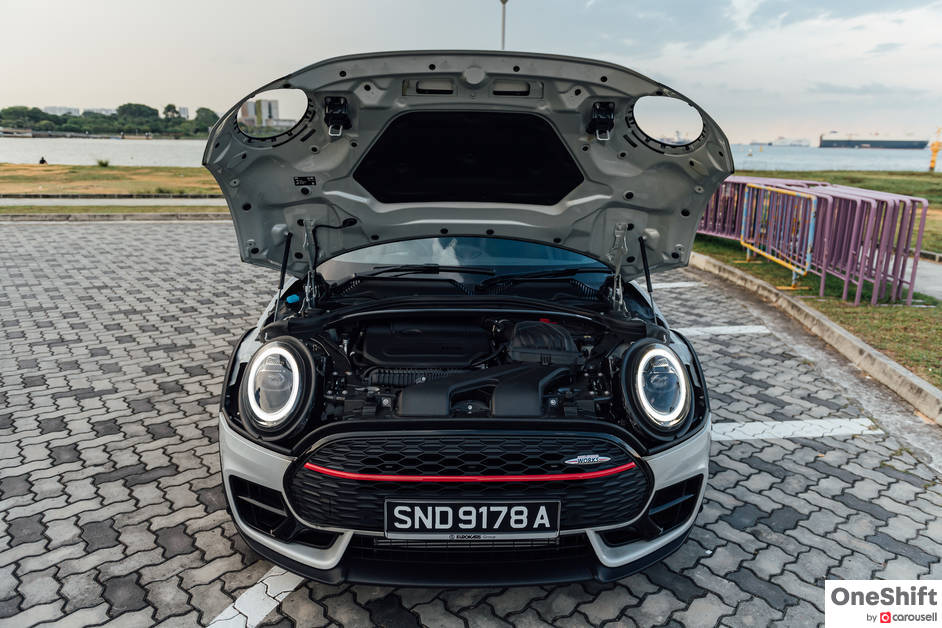 The standard ALL4 AWD system enables the car to put down its power in a fuss-free manner. There is no torque steer at full acceleration and the JCW Clubman can utilise all its power without overwhelming its front tyres if it were to be FWD only. With ALL4, the car constantly calculates the ideal power distribution to the front and rear wheels and under normal driving conditions, the JCW Clubman retains a FWD bias. 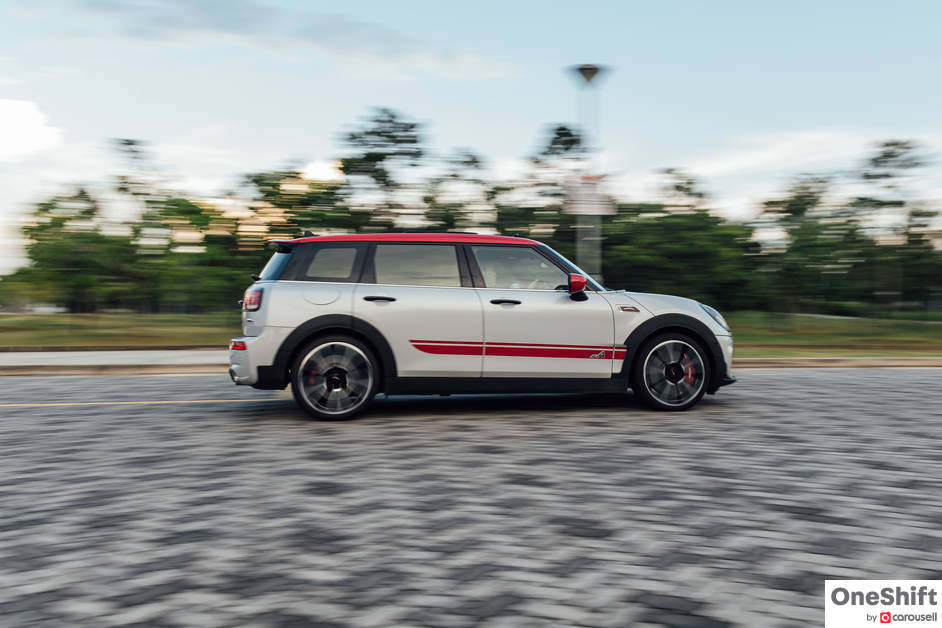 Instead of a dual-clutch automatic gearbox, the JCW Clubman is fitted with an 8-speed Steptronic torque converter automatic made by Aisin. It is well-paired to the engine across a variety of driving conditions. I believe the gearbox works best in Sport mode where gear shifts are sharp and crisp, and downshifts are well-timed. The transmission also has an integrated differential lock and can generate a locking effect of 39% between the front wheels to increase agility in corners. This car really inspires confidence around bends and you may find yourself scaring any passengers by entering and exiting a corner with immense grip and speed. 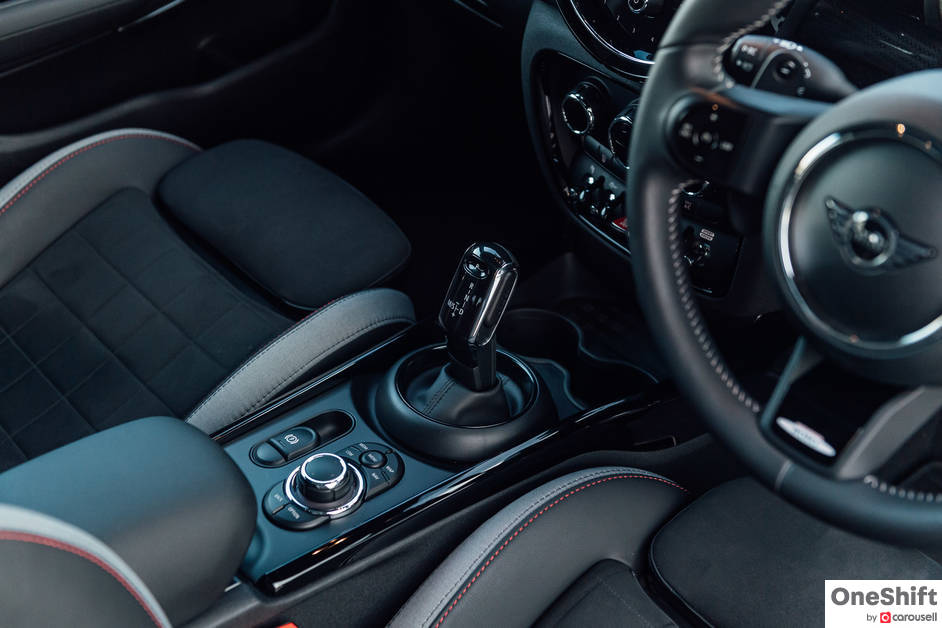 What impressed me the most is how the car retains its go-kart handling that Minis are known for while providing an acceptable ride comfort. Having driven a 3-door F56 Cooper S previously, I felt that the JCW Clubman was as competent around bends despite the additional heft but without the harshness and bumpiness of the 3-door (Mini purists may feel otherwise!). Mind you, we are talking about a JCW version here with added reinforcements to stiffen the chassis and sport camber settings to the front suspension. At higher speeds, the ride of the longer Clubman is firm but decently comfortable and jolts occupants less. 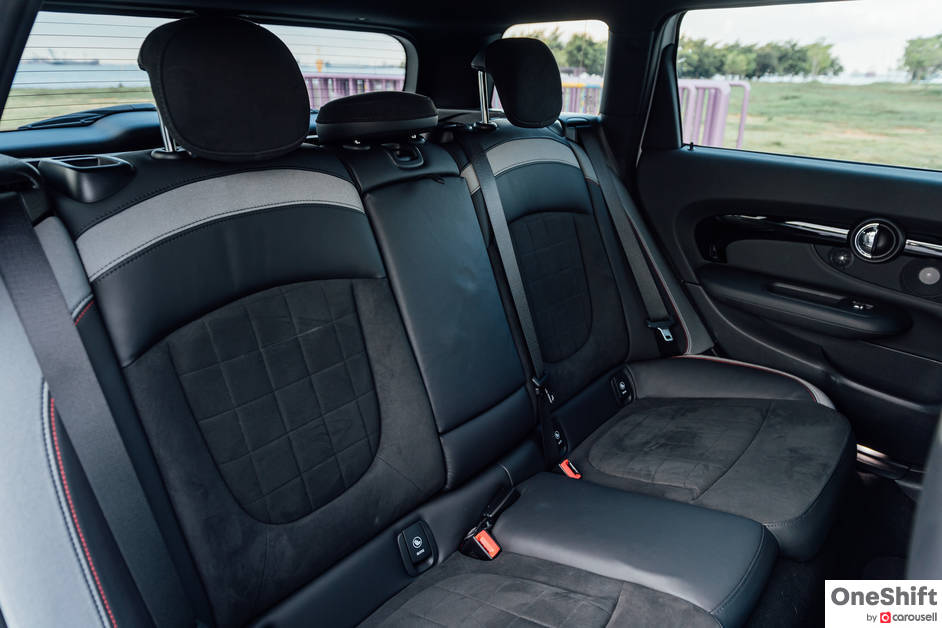 Practicality is likely to be a consideration for someone who considers a Clubman. It accommodates 3 adults in the rear (2 to be comfortable due to the driveshaft tunnel) and it comes with a 360-litre trunk with all seats up. Knock the rear seats down and a trip to IKEA would not require home delivery service. Rear seat comfort may not be the best as the backrests are angled slightly too upright to be comfortable for a long-distance journey to KL. However, it already works great in my opinion as a practical Mini. Adults, children and even a pregnant lady did not have any complaints about ride comfort during the test. 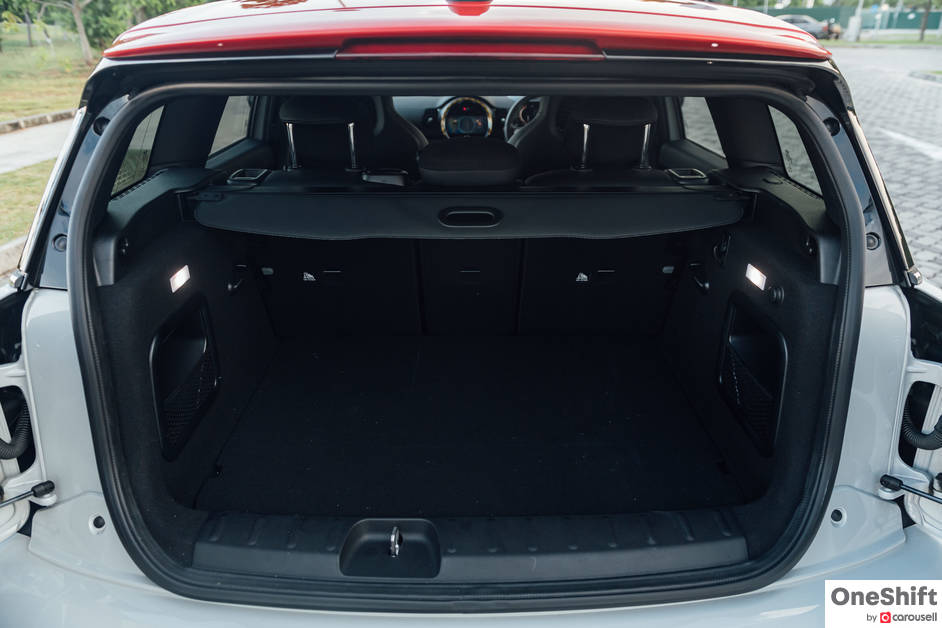 Interior design and quality of the JCW Clubman is a typical Mini affair of round dials, displays and meters. Aviation style switches can still be found at the centre console and on the roof. Flick the unmistakable red switch to start the engine followed by the Sport switch before beginning your journey. There are ‘Mid’ and ‘Green’ driving modes as well but that defeats the purpose of buying a JCW Clubman, doesn’t it? 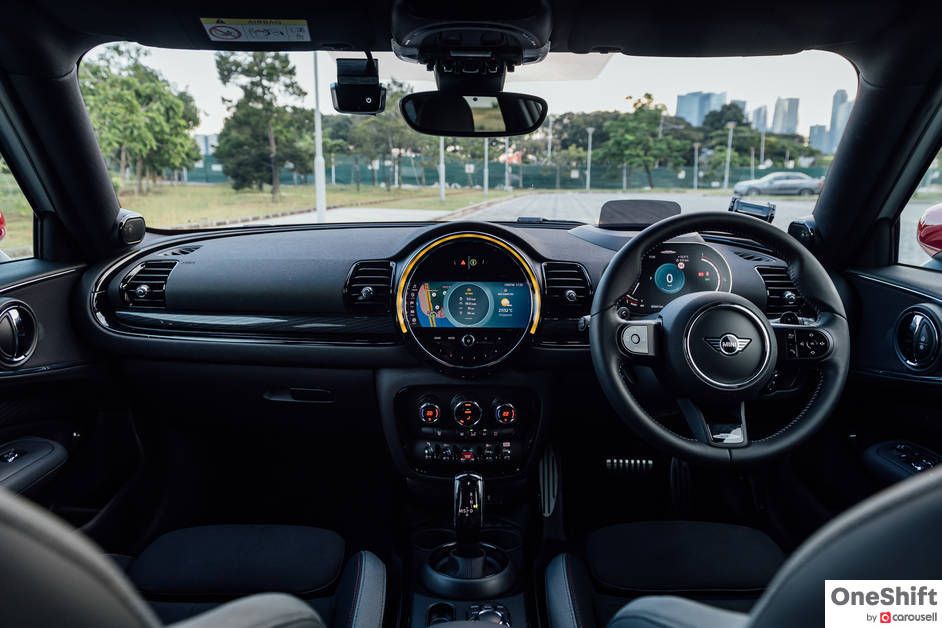 JCW emblems can also be found throughout the interior to remind you of this car’s racing pedigree. A 12-speaker Harman Kardon sound system comes standard as well. It would have been great if the JCW Clubman came with electric seats though. 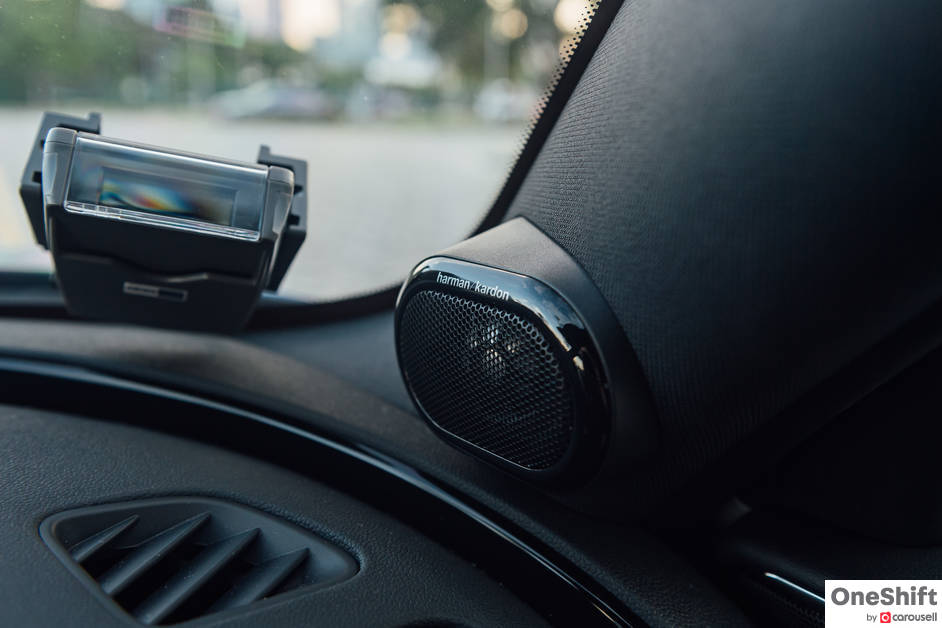 At $293,888, the Mini JCW Clubman offers a unique value proposition to its competitors. It is priced marginally lower than the Audi S3, BMW M135i and the Mercedes A35 AMG 4Matic but it offers something different – the cool factor of a Mini and the quirkiness in Clubman guise. A hot hatch is meant to be fun and it is exactly what the JCW Clubman is. It packs a fun design, an engine that burbles and has a very audible turbo spool, a very capable chassis and lastly, the option for practicality when sensibility is required in our daily lives. I found myself smiling every day when I was testing it and I was genuinely sad when I stood in the driveway overlooking it for the last time before it was returned to Mini.