Times have changed, and BMW has also addressed customer demand for more practical cars in its stable. And so here it is… BMW’s Gran Coupe version of the 8 Series, and it is an extremely pretty car. Share
Times have changed, and BMW has also addressed customer demand for more practical cars in its stable. And so here it is… BMW’s Gran Coupe version of the 8 Series, and it is an extremely pretty car.
What we like:
Smooth
silent performance. Lovely around the bends
as it is on the straights. Luxuriously-built and well equipped.
What we dislike:
Perhaps the use of runflat tyres do jolt the ride a little.

When BMW first showed up with their 8 Series about three decades ago, it was unfortunately a beautifully designed car, introduced at the wrong time. The oil-rich region of the world was rocked by a war, and most potential buyers would have been jittery about buying into something new and unfamiliar; not least to say about a car which had a V12 up-front, which would naturally consume plenty of fuel.

While we thought that BMW would have simply retired the 8 Series nameplate, they had recently made a comeback with the new 8 Series Coupe. Just like 3 decades back, the new car is a beautifully designed full-fat grand tourer in a suit. 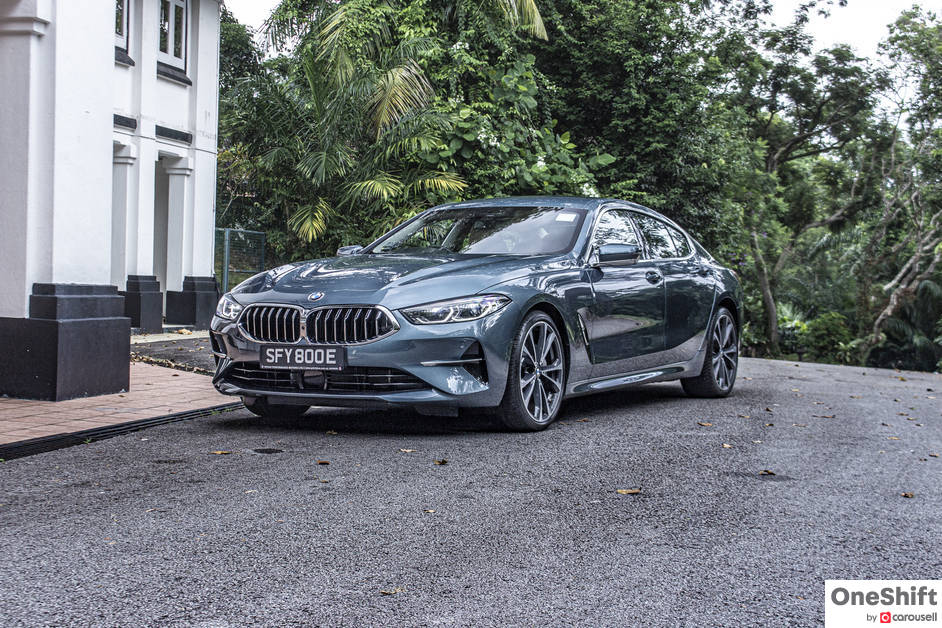 Times have changed, and BMW has also addressed customer demand for more practical cars in its stable. And so here it is… BMW’s Gran Coupe version of the 8 Series, and it is an extremely pretty car.

More practical car than the two-door, the Gran Coupe’s wheelbase is extended by an additional 20cm, has a higher yet gentler sloping roof line, and of-course rear doors. While it is the most “sensible” of the three 8 Series body shapes, BMW has not compromised on its styling, by making this look like an afterthought; but rather quite the opposite… sculpting a fine blend of elegant-yet-muscular lines, while retaining BMW’s recognisable design lexicon. 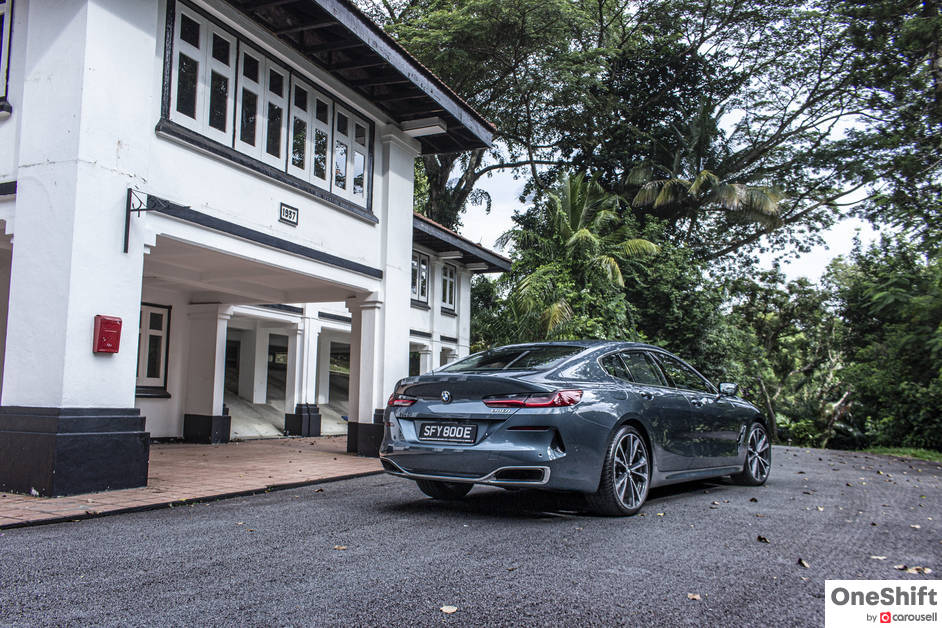 The Gran Coupe’s rear track has also been increased slightly by 28mm, compared to the Coupe. In keeping with its wide rear styling, the 8 Series’ fin-shaped tail lamps wrap around the side for added emphasis on its girth. This is also mirrored in the “Mini Me” 2 Series Gran Coupe, albeit in reverse. 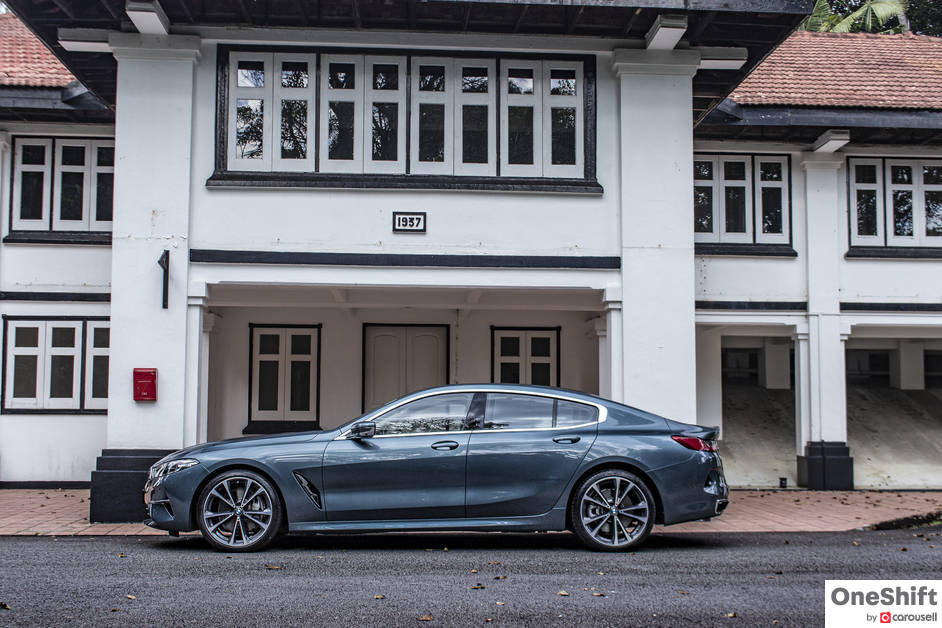 Like the 7 Series, the 8 also utilises BMW’s Carbon Core technology in its chassis. All 8 Series models are equipped with BMW Laserlight for improved long-range visibility, and are identifiable by the blue accents within the headlamp assemblies. 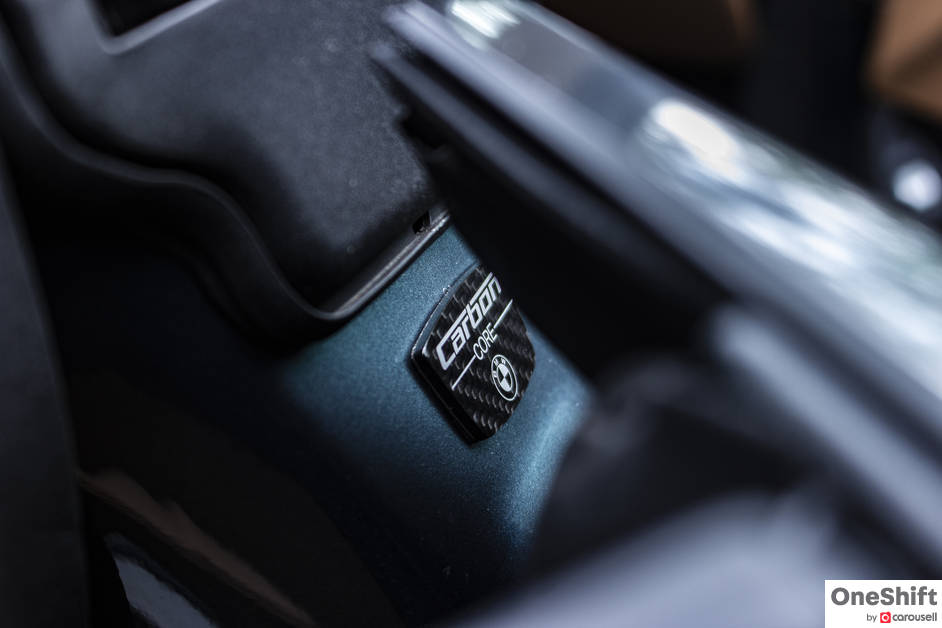 A semi-strict 4-seater, the 8 Gran Coupe features luxuriously sculpted leather seats front and rear, quite similar to the Porsche Panamera. The dash, with its driver-oriented centre stack, is also presented in leather. I particularly like “Crafted Clarity” glass gearshift lever, with its light refractive properties, which in itself is quite a work of art. 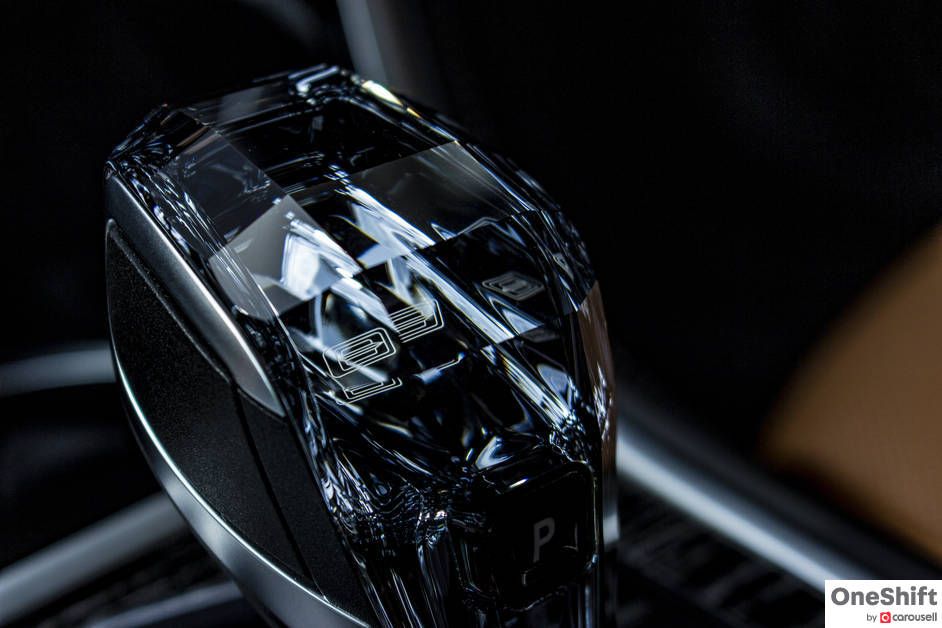 The 8 Series runs on BMW’s new operating system 7.0. This includes a 12.3” instrument cluster, and a 10.25” Control Display, which fronts the infotainment system. One of the strong points of the brand, their iDrive controlled system is among easiest to operate in the business, and is further bolstered by Gesture and Voice Control capabilities; my favourite phrase is “Hey BMW, I’m Bored”. This is when the system reacts by switching over to ‘Sport’ mode for a more spirited drive. Our test car is equipped with the premium 16-speaker, 464 watt audio package, developed by Harman Kardon. Mobile users can connect to the car via Apple CarPlay or Android Auto, and there is a wireless charging pad for those in the front. 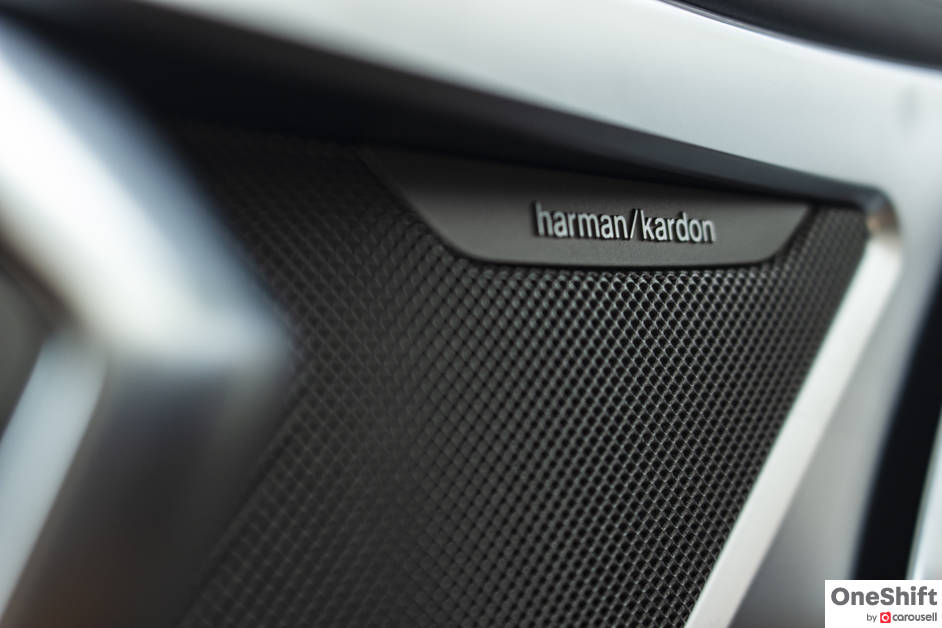 In expanding on its connectivity, BMW has also made it possible for passengers to connect to the car, with the driver’s given consent, by using the Connected Command function, which allows them to control selected functions, like calling up the route being followed. The playlist can also be adjusted remotely, and I can anticipate squabbles with this one. 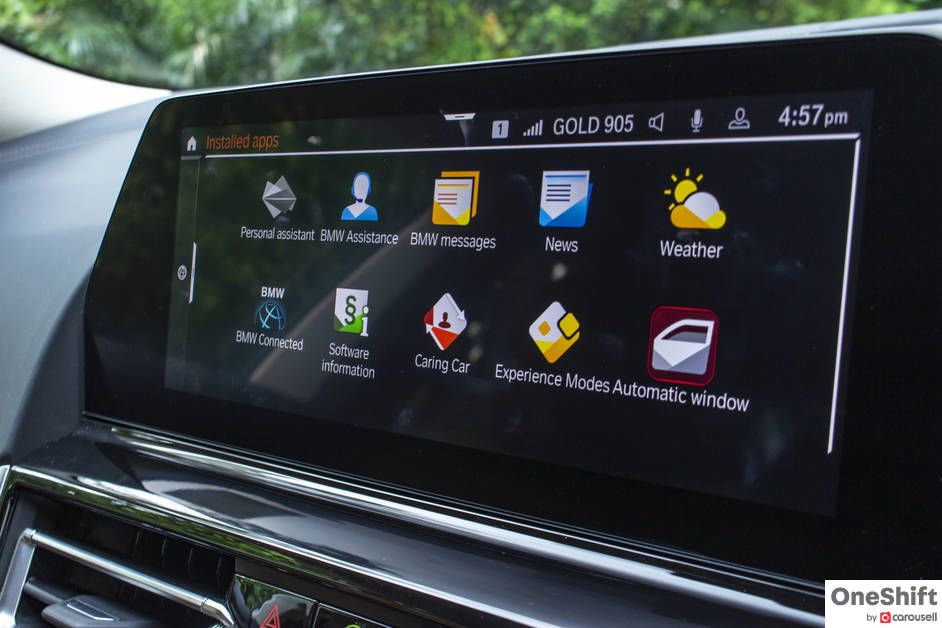 Interior dimensions are quite comparable to those of the 5 Series. Front passengers have similar headroom, though those at the rear get a little less, due to the sloping roofline. That said, it is comfortable enough for four adults, even on long journeys. 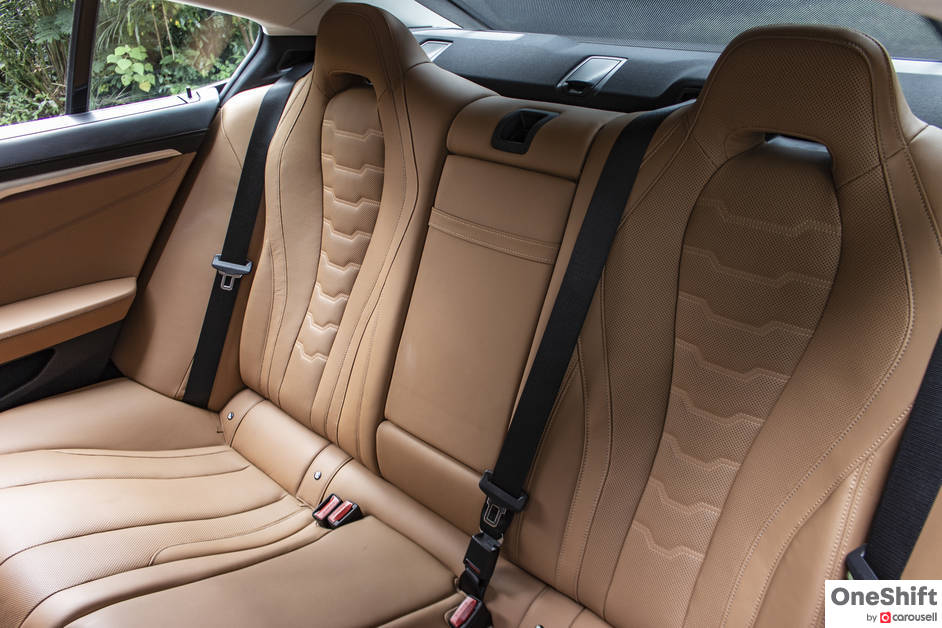 It is also practical too, with a boot capacity of 440 litres, which BMW claims is able to hold up to three golf bags. The rear seats, like most good sedans, fold in 40:20:40 fashion, and can also be dropped from the boot, through the use of a lever.

Sink into the supportive bucket seat, have yourself surrounded by the unmistakable scent of quality Merino leather. Hand on the finely-crafted glass shifter, lug it into ‘D’, and pull the 8 Gran Coupe onto the road. Right away, you will realise that there is an air of maturity that the car exudes. 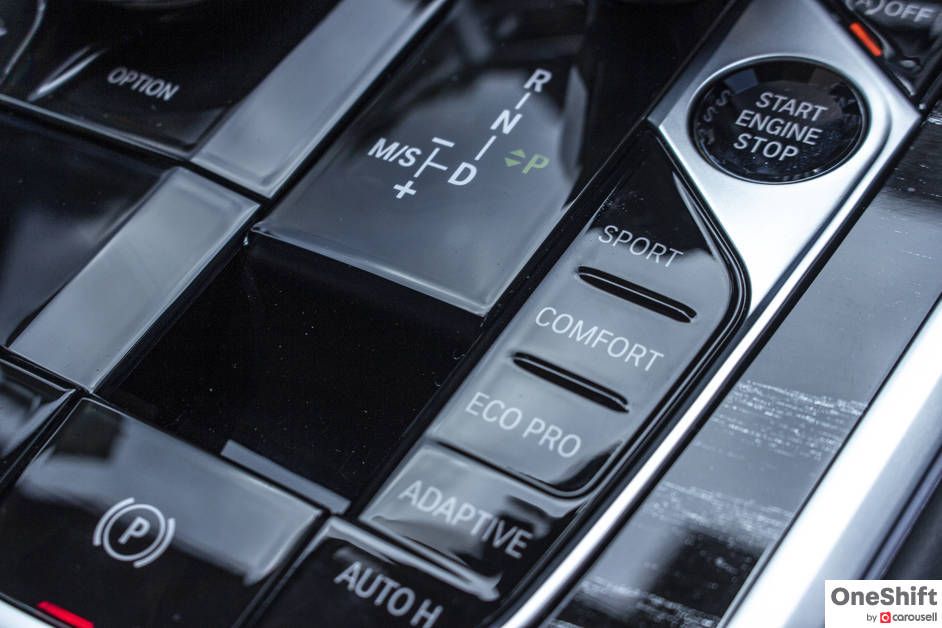 BMW’s smallest engine for the range, their signature three-litre in-line six, which does a fine job of powering the 840i, can be heard with a muted burble up in-front. It is not as rapid as the 850i’s 4.4-litre V8 (evident from its 5.2 vs 3.9 seconds to 100km/h as a reference), but we do like how the 8-speed ZF-sourced automatic is fed effortlessly from 3.0’s constant delivery of 500Nm, made available from between 1,600 to 4,500rpm. While the larger V8 is offered with BMW’s xDrive AWD, and rear-axle steering, the smaller-engined BMW is purely rear-driven, meaning you get “much-more natural-er” behaviour which we truly appreciate, especially when going around and exiting bends. We feel that somehow, the less-powerful setup allows you to milk the best out of the Gran Coupe. 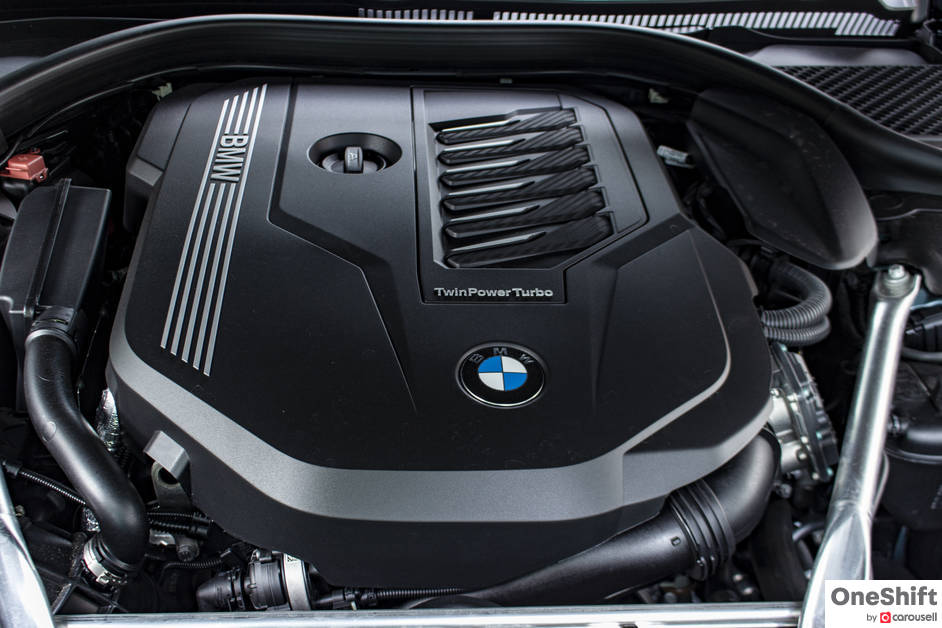 Maybe a good analogy is that the 4.4 litre packs a punch more akin to a “super-gao iced milo”, while the 3.0, is quite the same, but slightly milder, allowing you to truly savour the rich-creaminess of the condensed milk within… It does leave an impression.

Gefrorene heiße Schokolade aside, the Bavarian Gran Coupe offers a different kind of driver engagement compared to say a 540i, or even a plusher 7 Series. The contoured seats are a constant reminder that you are in something more sporty, and there are times that you will forget that you are driving a car with doors at the rear. This is in-part due to the low rake of the windshield, and how you are generally positioned in the car. 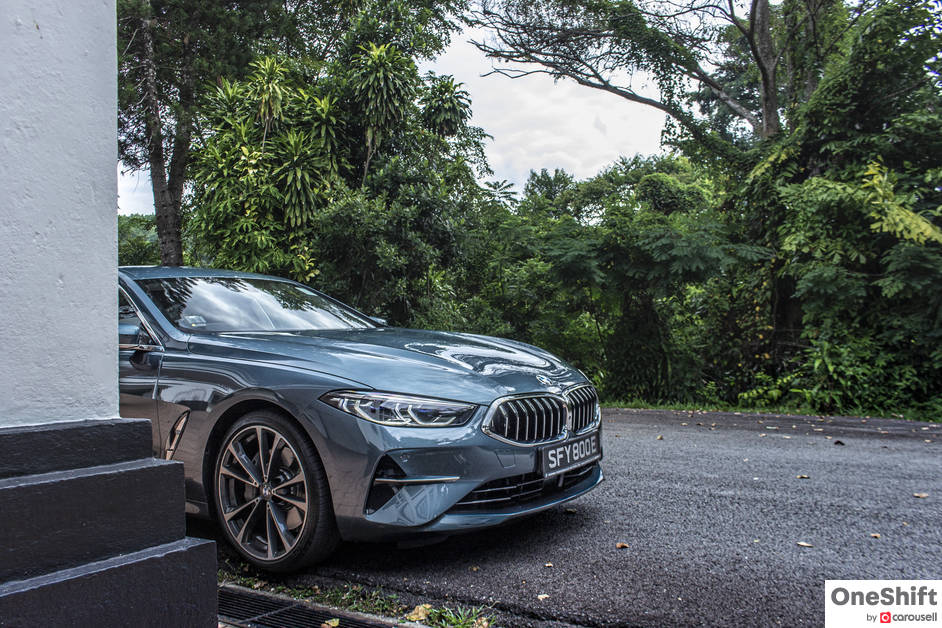 Like the mid and up-market cars in BMW’s current range, the 840i Gran Coupe benefits from a number of driving aids. The Reversing Assistant, which autonomously backs the car, based on the path previously taken, helps you to reverse the car safely out of tight confines. Parking Assistant Plus helps you to park both in parallel and perpendicular lots. Both of these operations are further bolstered by an adjustable 3D Surround View, which displays the car virtually from the outside, with the help of some clever virtual stitching of information collected. 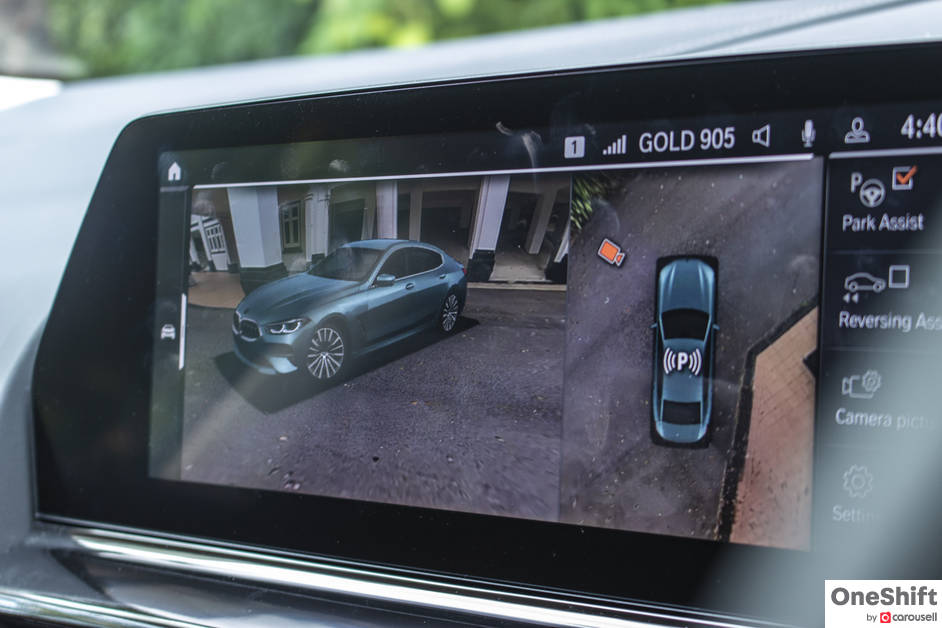 We genuinely love the powerful statement the 8 Series Gran Coupe makes, but beyond making a statement, the smaller engined car to us, delivers a satisfying drive, one which you can savour… more so than the V8 model. 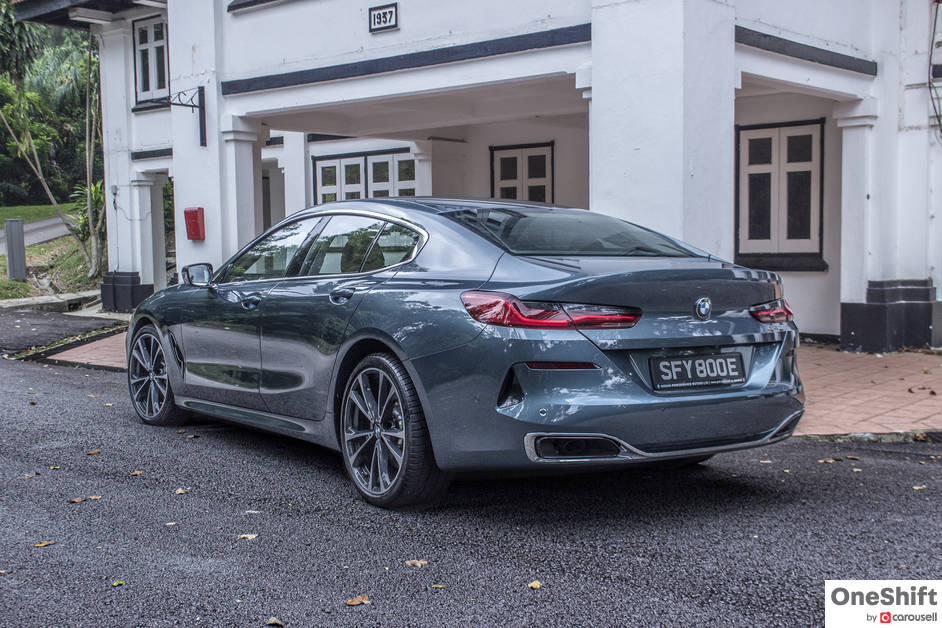 Competition is four-way, and purely German, in the form of the Mercedes-Benz CLS, Porsche Panamera and the Audi A7.