Its back… The all new 8 Series that is.  Some decades ago, when BMW first decided that a flagship GT style car was a fab idea, they were met with a market at the time which was tumultuous. The world was in recession, there was a war going on in the Middle East, which also meant higher fuel costs. Share
Delivery of the drive is near creamy-smooth, in-part thanks to the transmission’s integral twin-damper system
What we like:
Loaded with helpful tech like their Reversing Assistant
V8 delivers so well both in traffic and when let loose
Well-sorted styling
Can&rsquo;t deny that the interior is very pretty
What we dislike:
More noise can?

Its back… The all new 8 Series that is.

Some decades ago, when BMW first decided that a flagship GT style car was a fab idea, they were met with a market at the time which was tumultuous. The world was in recession, there was a war going on in the Middle East, which also meant higher fuel costs. 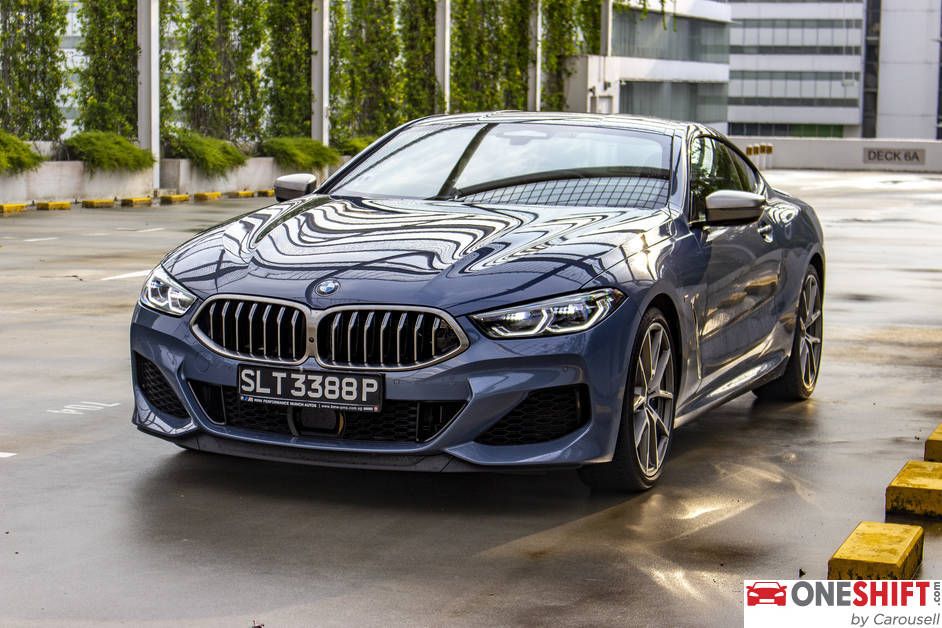 The car however, was superbly designed, carrying on it a smooth-spinning and natural-breathing V8, and wedge-shaped styling, which was synonymous with late 80s and early 90s sports cars.

I would dare say that the then 8 Series even qualified to take its place alongside the many supercar posters, pinned up on the wall in a teenage boy’s bedroom, and even making its way into the wet dreams of some. 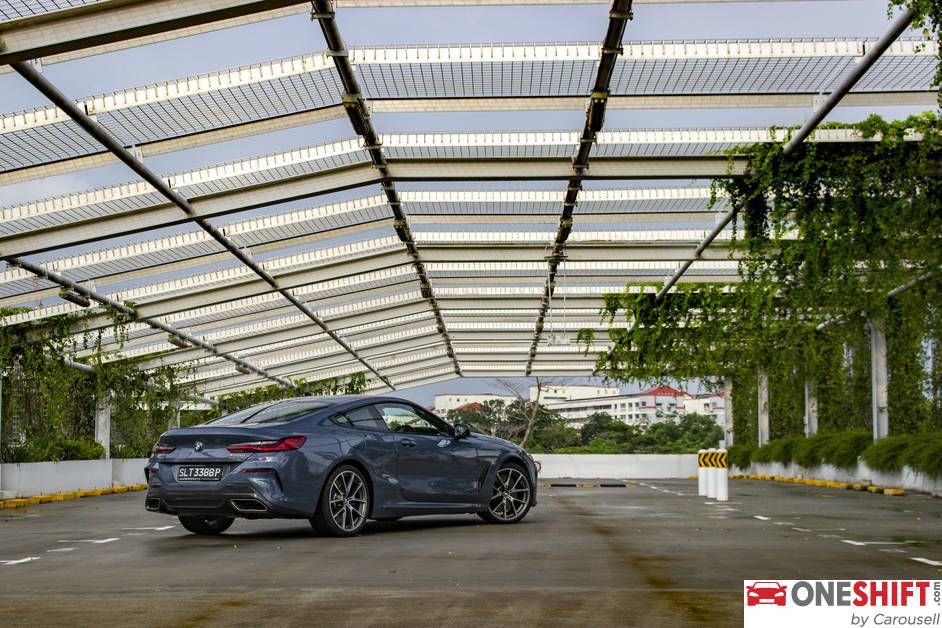 The new M850i utilises BMW’s widely used Cluster Architecture (CLAR), which cars like the Z4, X3 and even the X7 are built upon. For the 8 Series, it also boasts Carbon Core technology, built into the transmission tunnel.

Its low-slung styling, is complemented by a slim pair of headlamps (the slimmest of any BMW to date), flanking a (very) wide grille; and features BMW Laserlight, which boasts a range of up to 600m.

There is a good amount of visual play on its side profile, and like many new BMWs, the 8 Series sports a vent (a functional one) right behind the front wheel for better stability of airflow. Blistered wheel arches are well incorporated into flowing body lines. Its signature Hofmeister kink sits proudly at the rear window, while its double bubble roof is a nod to the ones found on classic racing cars. In delivering a sense of girth at the rear, its tail lamps extend far into the sides of the body. 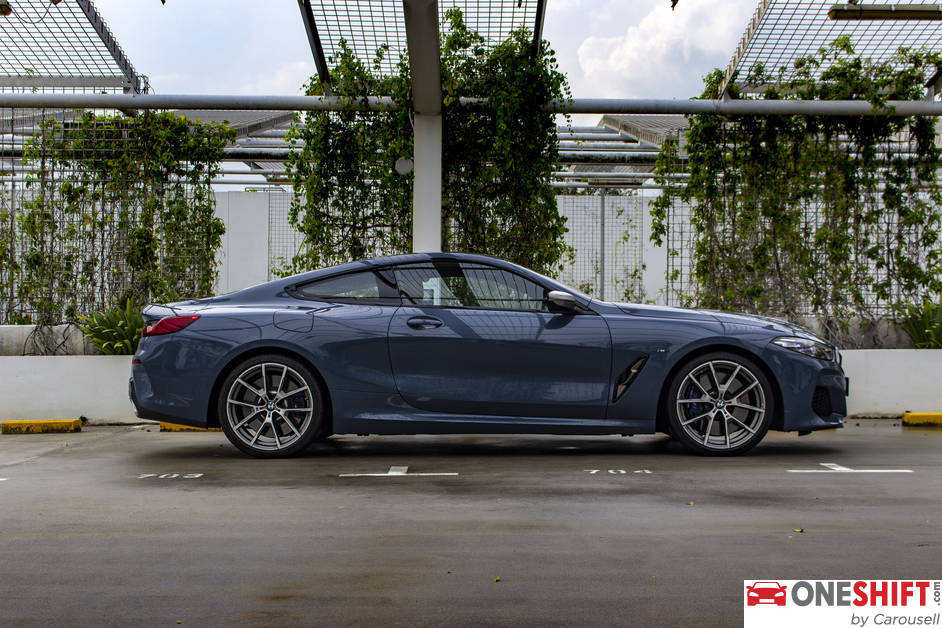 While it does turn heads, it is still able to be rather understated, and could probably fly under the radar, as long as you do not flip on “SPORT+” mode.

Our test car’s interior is fitted with a brown/grey selection of leather complementing the Barcelona Blue Metallic paint coat. The dash gets full leather treatment as standard, and therefore will require some care to keep it looking its best. 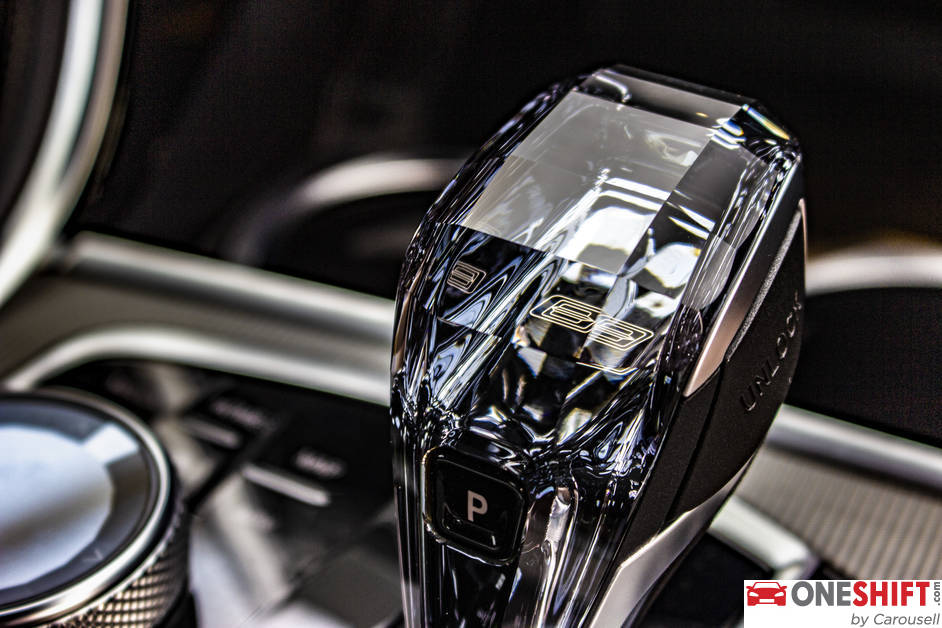 One of the most beautiful gearshift knobs I have come across

The new BMW operating system 7.0, includes a 12.3” high-resolution instrument cluster and 10.25” Control Display. The new system is more customisable than the previous card-style interface, also incorporates the new BMW Intelligent Personal Assistant (think Google Home or SIRI). The latter adds another dimension to how you can interact with the car, together with the iDrive touch controller, steering and gesture controls. My personal favourite command for the Intelligent Personal Assistant “Hey BMW… I’m bored”, where the car responds by flipping itself over to ‘SPORT’ mode. 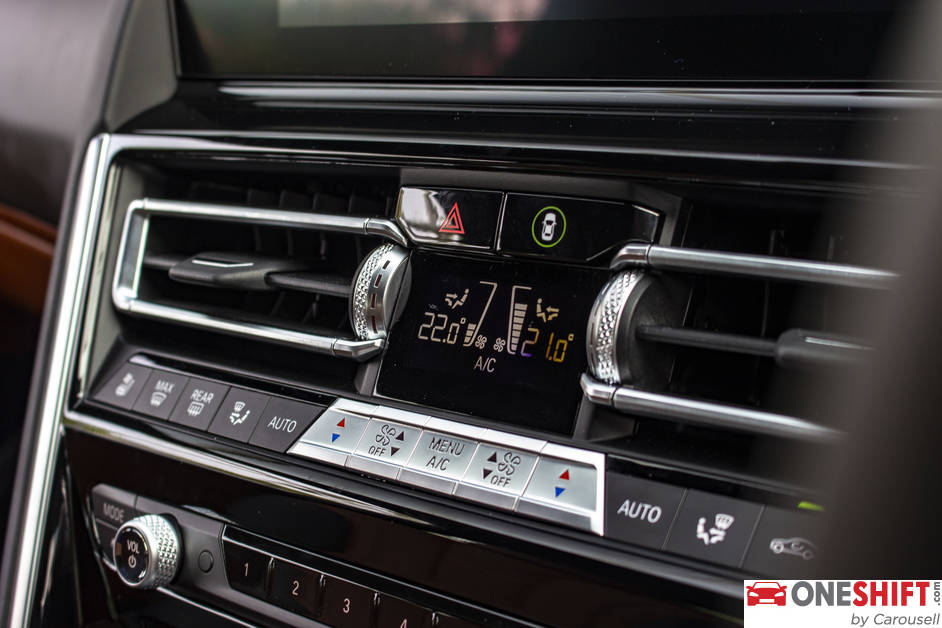 Like the new X7 SUV, the M850i also receives a lovely glass cut gearshift knob, with a backlit number “8” at the base. Interior elements are also layered with glass for a more opulent feel, in what BMW calls “CraftedClarity”. Front bucket style seats are ventilated, a welcome addition especially in our tropical climate. Rear seats though have rather limited legroom, and the sloping roofline does not help, after all it is built as a 2+2 seater. 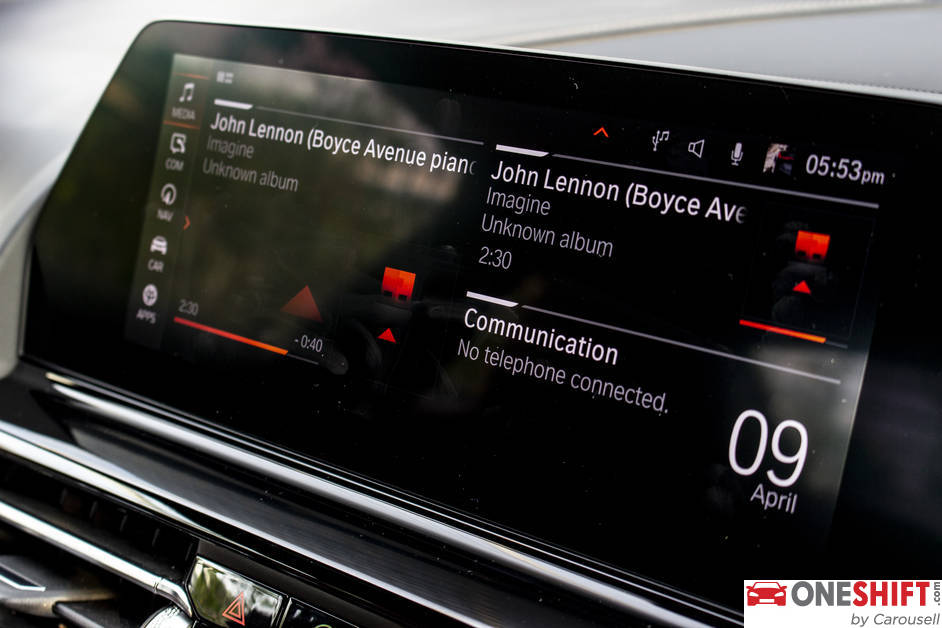 At 4.8 meters, the M850i delivers the promise of some very practical cargo space. At 420 litres (for comparison the new 3 Series is 480 litres), it is actually very good for a coupe. Rear seats also do fold down in 50:50 fashion, for a little more hauling flexibility.

The N63 version of the 90 degree 4.4 litre V8, similar to the one found in the M5, but in a lower state of tune, finds its way into the M850i. The wide “hot Vee” 90 degree angle of the engine houses two twin-scroll turbochargers between the ‘V’ of the engine, ensuring quicker response from the turbos.

Power is rated at 530hp, while dizzying torque of 750Nm, is delivered from between 1,800 to 4,600rpm. Delivery of the drive to all four wheels, is through a ZF8HP 8-speed transmission. Unlike the M5, which allows the purist-at-heart to shut off the drive to the front wheels, the drive system here is permanent. Performance-wise, the M850i is still blindingly quick, with a clocked 3.7 second 0-100km/h; just for a little comparison, the M5 does 3.4 seconds. 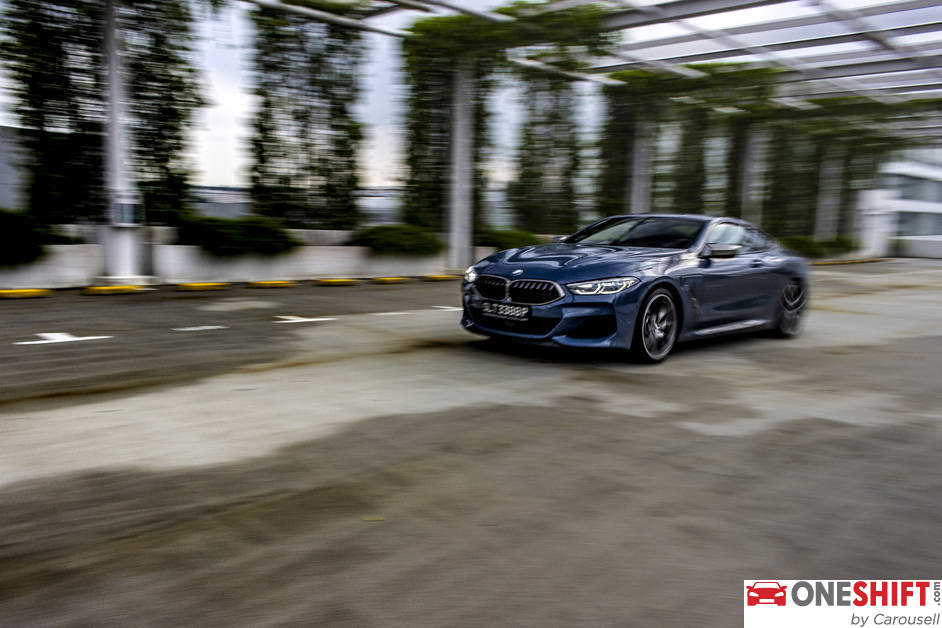 Delivery of the drive is near creamy-smooth, in-part thanks to the transmission’s integral twin-damper system, deployed to isolate vibrations, and torsion dampers to reduce rotational irregularities.

We like that there is quite a good deal of flexibility delivered by the deep-breathing V8. Take a few sharp bends in SPORT+, and you can appreciate how balanced the M850i is, and in keeping things driver-centric, the xDrive system is rear-biased, with enough shove coming from the rear, to have you fooled that it is a pure RWD car. 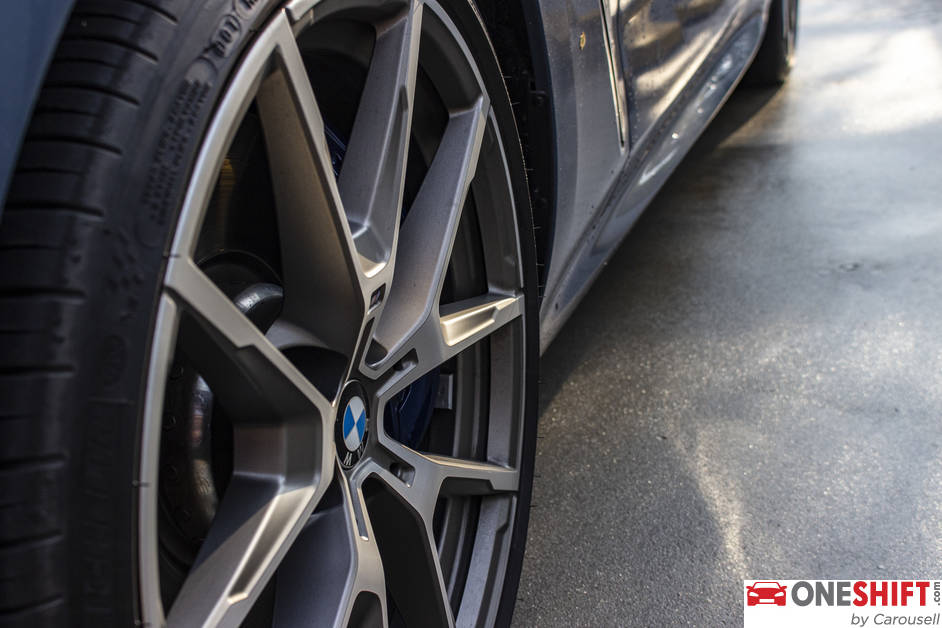 An electronically controlled rear differential lock, fitted as standard, ensures that the right amount of torque is supplied to the inner and outer wheels. Downshifts are met with addictive backfiring, perhaps not as aggressive than say, a Mercedes-AMG E63 S, but coupled with the burble of that lovely V8 up-front, the cabin at that moment, could be one of the best places in the world to be in.

In ECO Pro mode, the powertrain can decouple itself from between speeds of 15 to 160km/h to reduce fuel consumption. The system is further enhanced by BMW’s Proactive Driving Assistant Professional, which cleverly utilises Satnav and radar to calculate when the drivetrain should again recouple. 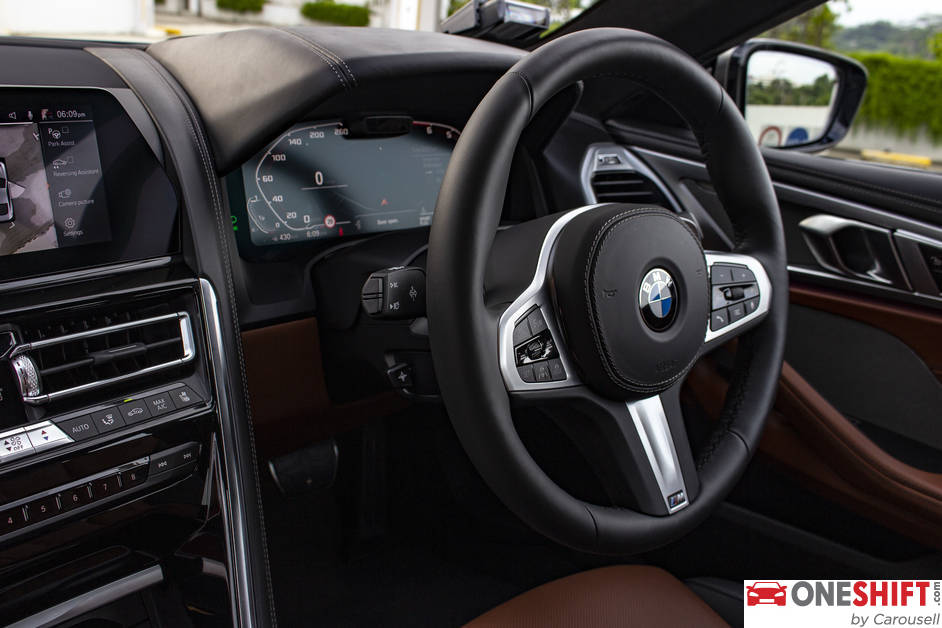 The very same system also monitors the path you are taking when doing a series of tight turns, and ensures that no unnecessary gear changes are made, to deliver optimum cornering performance.

Its rear-axle steering effectively tightens the turn circle by turning up to a slight 2.5 degrees in the opposite direction at up to speeds of 72km/h, and follows the direction of the front wheels at faster speeds. The latter brings about added stability and comfort during lane changes, similar to cars with a longer wheelbase.

Be it in the thick of traffic or during opportunities where you can let that V8 sing, we have come to love how responsive, the engine is. Even with all that torque on-tap, the engine is still able to deliver an easy drive with a delicate touch; but truly, this is a sweet-fitting velvet glove covering a hard iron fist.

Over a year ago, Lexus introduced their LC500. To us, a masterclass in Lexus engineering, and we certainly liked how they bucked the trend of slightly down-sizing and force-feeding. The resulting coupe, is one which is razor-sharp, while still luxurious in delivery.

The M850i to us, is BMW’s way of doing just the same (perhaps slightly less sharp than the Lexus, but that kind of sharpness would be a gap filled by the M8). A celebration of technologically - the best they have, together with a balanced-spirited drive. 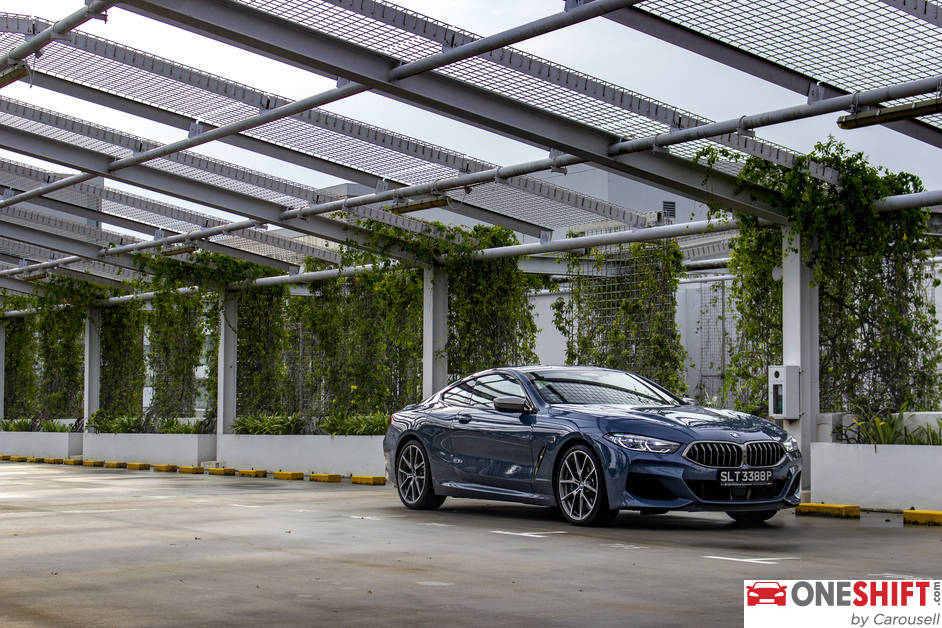