Chinese motorcycles have been increasing their global presence in recent years. This is not in reference to renowned brands turning to Chinese manufacturing. What we mean are Chinese home grown brands, cutting a slice of the global pie for themselves. Chinese motorcycles have been increasing their global presence in recent years. This is not in reference to renowned brands turning to Chinese manufacturing. What we mean are Chinese home grown brands, cutting a slice of the global pie for themselves.

How exactly do they achieve this? Obviously, through price point. Where filling in this segment leaves consumers wary of gaps and raised eyebrows, there are manufacturers elsewhere who have comfortably occupied this segment for years without hiccups. Take Royal Enfield for example. To push the limits of this cost effectiveness versus perceived sacrifice in quality, we took the opportunity to put a low cost Chinese motorcycle, the CFMoto 400NK through the paces. With an engine size that puts it squarely in the typical range of budget machines. It’s honestly a budget within a budget. At the time of writing, the 400NK just barely broke the SGD $20,000 mark. With COE! Good thing to report, we survived and it didn’t fall apart at any given time. 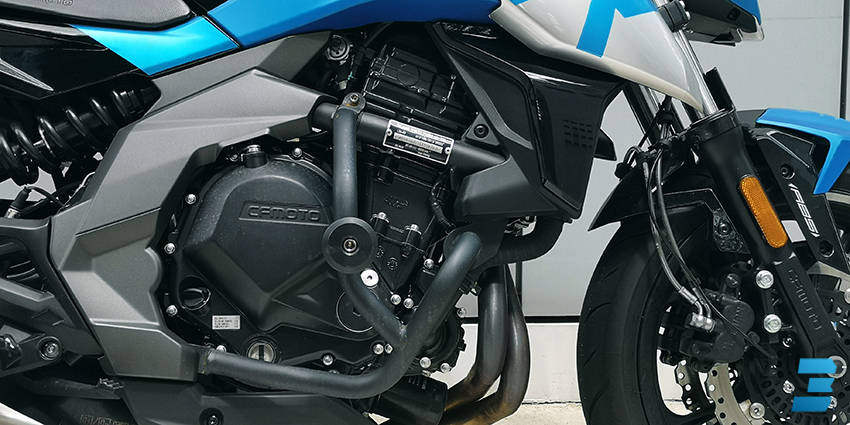 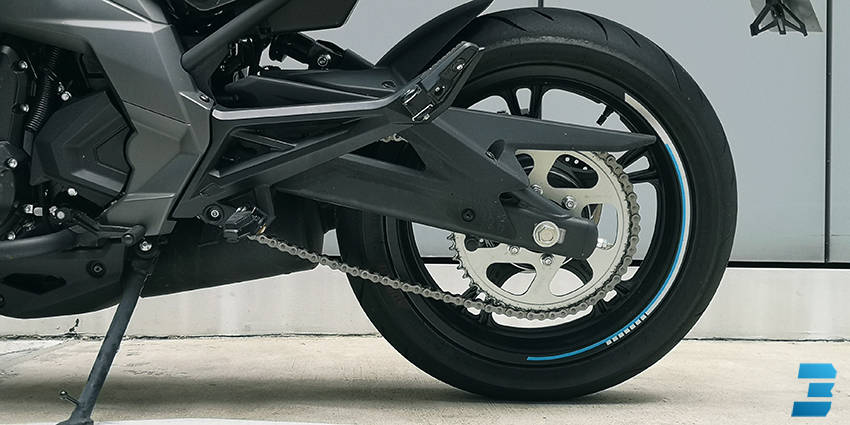 We were brutal on the throttle with this machine. A brand new 400cc, parallel twin pushing a maximum of 41 horses at 9500 rpm and 32 newton metres of torque at 7750 rpm. How did it feel? In the lower end of the rpm range, the 400NK felt borderline lazy. The throttle pull is light. It pokes fun at modulation attempts by being a little vague. Even though it is a cable operated throttle. Gearing was unnecessarily tall in the lower gears. Probably aimed at fuel economy.

The motorcycle? It feels light and undaunting, relatively low seating, narrow and easy to mount with feet on the ground. What of performance from the 400cc parallel twin? The CFMoto 400NK pulls smooth and gentle. Almost as smooth as a Japanese engine. Watching a certain committee investigate breaches of privilege might be more exciting. It won’t take too long to reach 5000 rpm though and then the 400NK decides you are worthy of its power. It isn’t screaming power like an in-line 4 but the difference is less than subtle and CFMoto wants you to know it clearly. 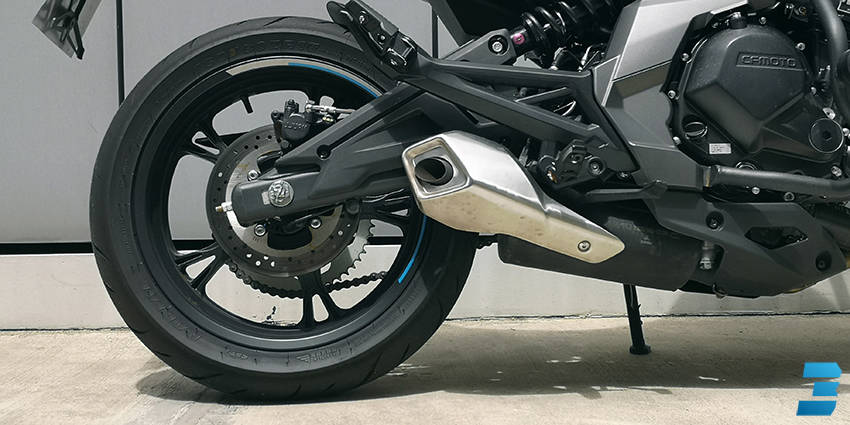 Clearing 5000 rpm, the engine note changes. No more little puppy noises, it barks crisp and sharp now. The CFMoto 400NK leaps forward, driven by that massive final sprocket on the rear wheel. Yes, it is a massive sprocket. The glorious noise and pull grows gradually and the give continues with more juice above 7500 rpm. Running the engine in this range explodes more liquid dinosaurs, fuel economy will be reduced. But for that, it becomes sporty and stays that way until peak hp is reached at 9500 rpm. There is some heat to be felt at lower speeds and city traffic but that disappears at expressway speeds. 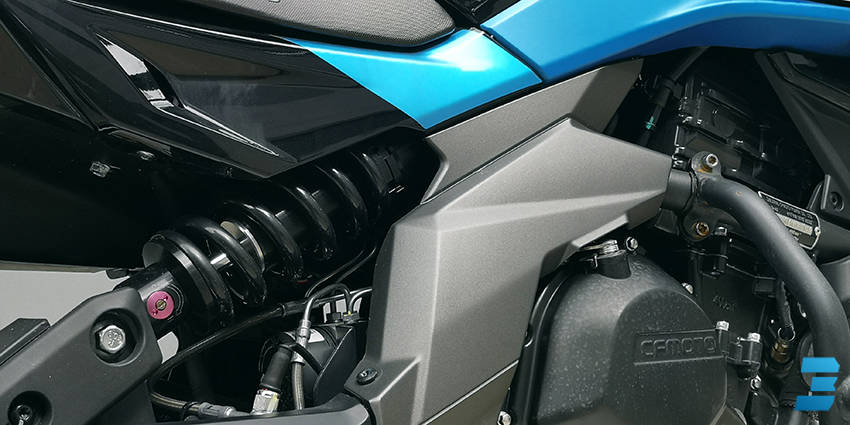 In this range, the 400NK’s stiff, light weight body shines as it is flicked about. What navigates the city streets and tight spaces in heavy traffic with ease now dances with gusto at every touch. The 400NK will make a great corner carving machine if you put it through its paces. The suspension setup is decent, soaking up larger bumps. At factory settings, small bumps are transferred to the rider, bouncing the rider off the thin, low profile seat. We dialed it back 2 clicks on preload and found the response to be much better, cutting back on feeling those bumps. The suspension takes care of larger bumps much easier though and makes it quite a pleasure to be on.

Braking is handled by J.Juan calipers. Who are they? For Juan, the Brake manufacturer has Spanish roots. Two, they were acquired by Brembo. Period. Braking is absolutely adequate on this machine. Ace. A Bosch dual channel ABS unit comes standard. Deliberate attempts to activate it were rewarded by the typical buzz of the lever but braking was good in both dry and wet, with good feedback through the levers. Top notch for something facing strong competition in the 2a class. Tyre grip was up there too and made engaging this machine a hoot. 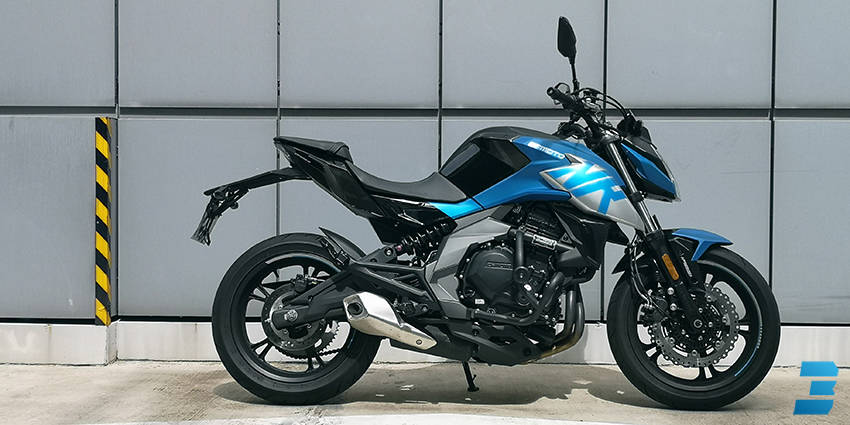 The big question that remains now is where the budget rears its ugly head. Ugly? Not quite but definitely noticeable. The 400NK is handsome looking. The machine has presence sitting among other bikes. Especially when the Japanese are pushing designs of their 400cc and below machines for appeal. 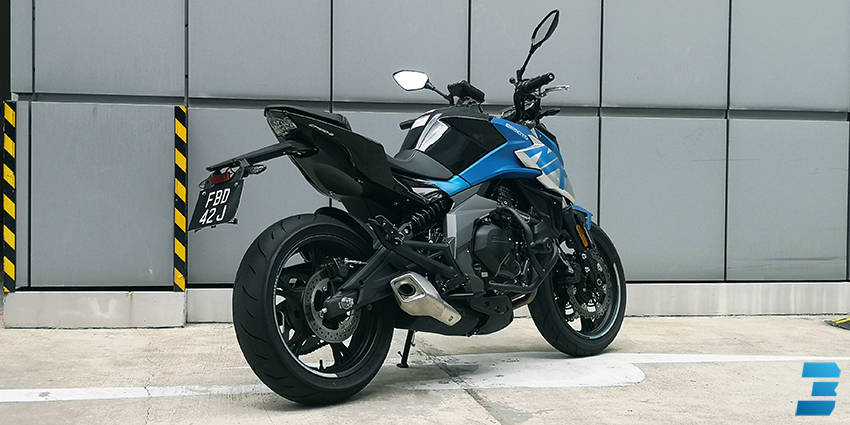 Chinese manufacturers are famed for shamelessly taking inspiration from popular machines and let me point that out to you here. The headlight unit looks very BMW inspired. The radiator guards look a tad Austrian. Note, CFMoto does manufacture engines for KTM. So engine build quality is not worth doubting. The body, is made of a lot of plastic. Tap away with your knuckles and you will see the extent of the use of plastics. There are gaps in the fitment. Meh. Paint is alright, until you run your fingers over stickers and labels on the fairings. But that's what bikes in the ‘90s were like anyway. Rim stickers are a nice touch. They look trick and definitely a sight when rolling. The low profile seat is clearly more aesthetic than anything else . It's worth a discounting though. There are premium bikes out there with seats that make anything more than 70km stints unbearable. So the CFMoto 400NK is not too shabby in this department. Oddly, the foot controls do sit a little high, benefitting smaller riders than lanky tall folks for sure. 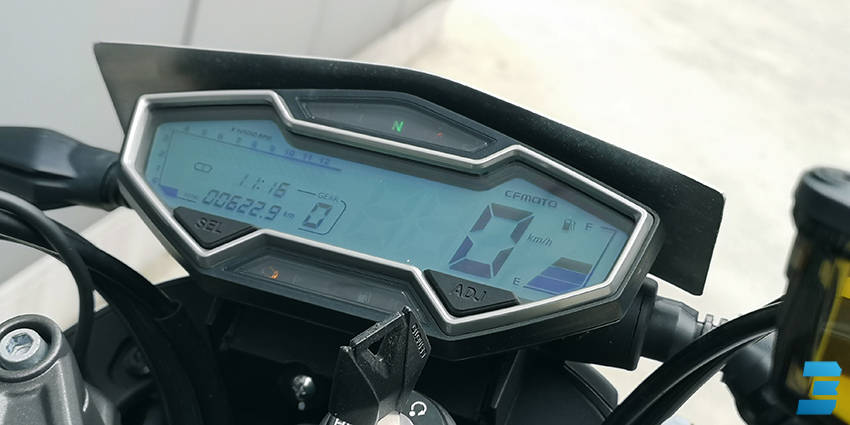 Let’s talk electronics! Riding modes in a 400cc? Yup, Sport and Eco. On Eco, the power band is dialled back just a touch, to extend fuel economy. Barely noticeable from Sport but go searching and you will find that difference. The lighting package is full LED. In with the times, bright and decent! Easily noticed when flashing passing lights at drivers, definitely warrants a thumbs up for rider safety. The LCD display also displays information clearly and everything is easy to read at a glance. Good for keeping eyes on the road. A definite win for the 400NK are the backlit switches, good for the slightly odd placing of switches. The switch gear has an odd placement for the horn and while thumbing the signals I jabbed the horn a couple times accidentally. It takes some getting used to for sure, but we can live with that.

So as a whole. Is it worth the budget? Yup, fuel consumption is not quite there with the economy man’s machines but it is comparable against the other 400cc machines around and won’t drain the wallet. It did go on long commutes, including some happy rev range exploration so it may actually get better results in the hands of someone else. The CFMoto 400NK looks decent, sets itself apart from the crowd and boosts its presence with good lighting.

In conclusion, what would we change about it? The seat could do with a little more padding and if anyone should want a whole step up in handling, a suspension upgrade. That aside, its stupidly good value for money so wishing for better out of the factory could just be nuts.

Find all your motorcycle needs on Carousell: https://bit.ly/3sVygSu