Share
... it still spells bona fide supercar in large caps, especially in this hue of Vegas Yellow.
What we like:
Feels special, sounds special, looks special
Amazing V10 that will be extinct in the R8, soon
Daily usability
Build quality
What we dislike:
Sits in a niche that might be too small

When the R8 was first unveiled to the world in the mid-2000s, it shook the automotive community. BMW and Mercedes, back then, had no answer to the Audi supercar. It offered German sensibility in engineering and precision, packaged in an exotic mid-engined sports car formula. If anything, it probably was the closest the Porsche 911 ever had as a competitor. 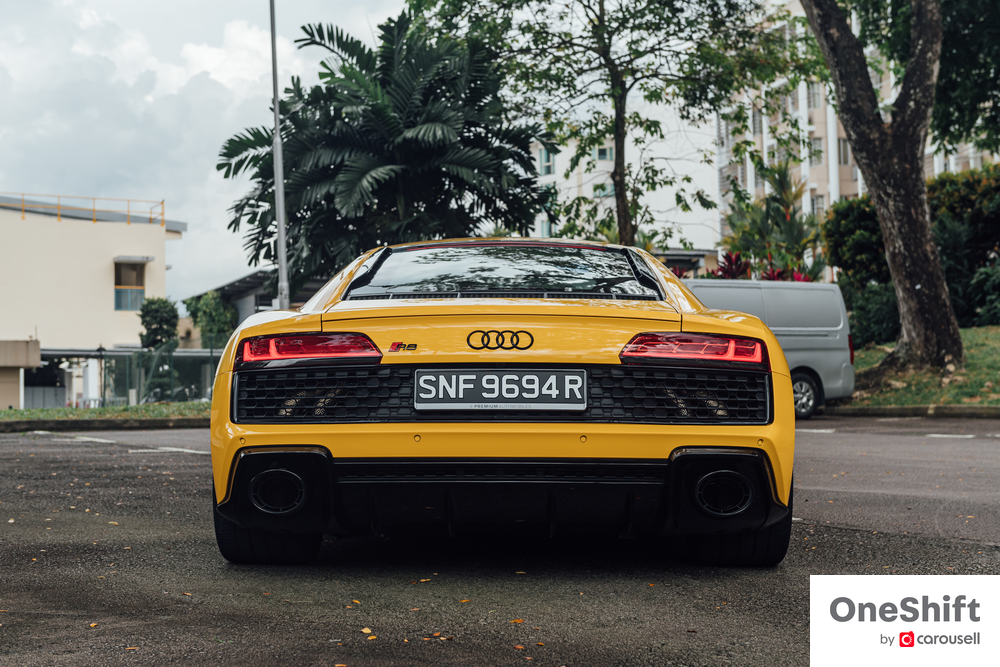 At launch, the R8 was offered with a naturally aspirated V8 and quattro, and it is in this configuration that I most fondly remember the car. Sadly, when the new generation R8 (Type 4S) was launched, it dropped the V8 from the line-up, offering “only” the V10. Practically speaking, it made sense. At that point in time no other car in the range used the 4.2-litre V8, and so there were no economies of scale to continue with that engine. 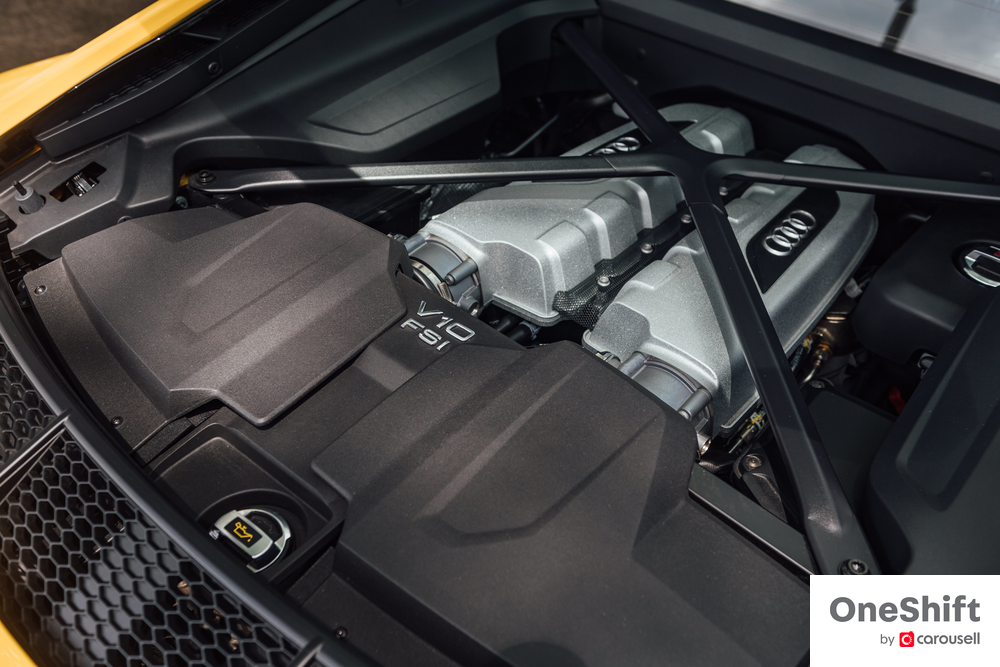 Thus the car on test is equipped with a V10, and not just that, as the ‘performance’ tag would hint - the car has an extra 30 PS and 10 Nm over the regular car, yielding 570 PS and 550 Nm. Another interesting option applied to the car is RWD (rear wheel drive), which to me felt a little at odds with the strong quattro branding. That said, this is probably the purest specification of the whole line-up, with the lowest possible kerb weight of 1,590 kg. The modest weight is also achieved by the Audi Space Frame (ASF) material mix of aluminium and carbon fibre reinforced plastic (CFRP). 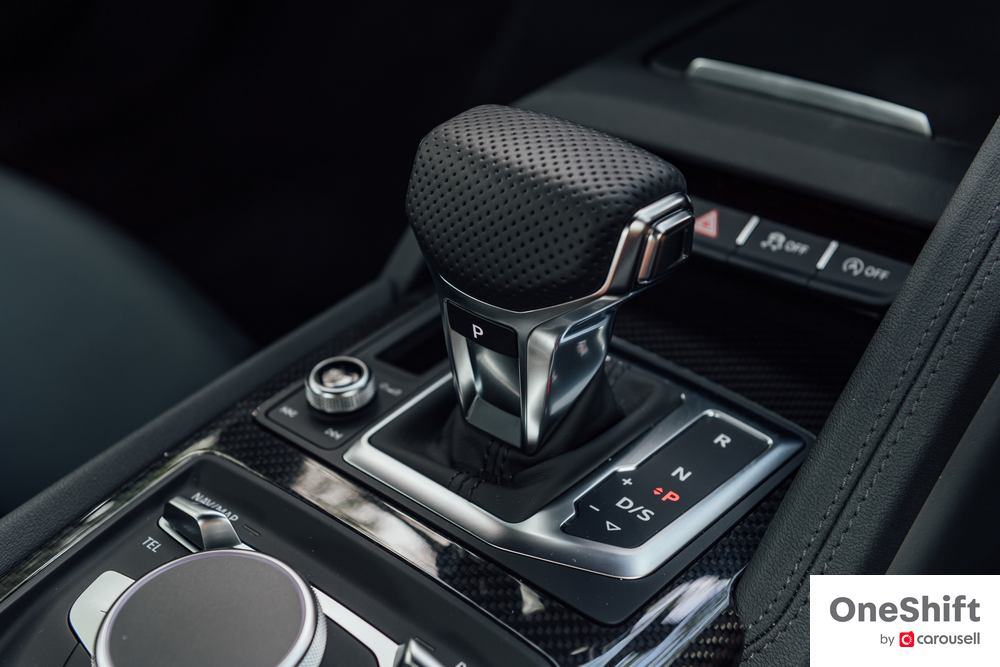 Speaking of purity, no manual transmission is available as well (similar to the Lamborghini Huracan). This again, was offered on the first generation R8, especially critical when Audi’s automatic solution early on was the single robotised clutch option, the R-tronic. You could say the lightning-fast shifting S-Tronic, which was introduced afterwards and applied here, made the need for a manual tranny superfluous. 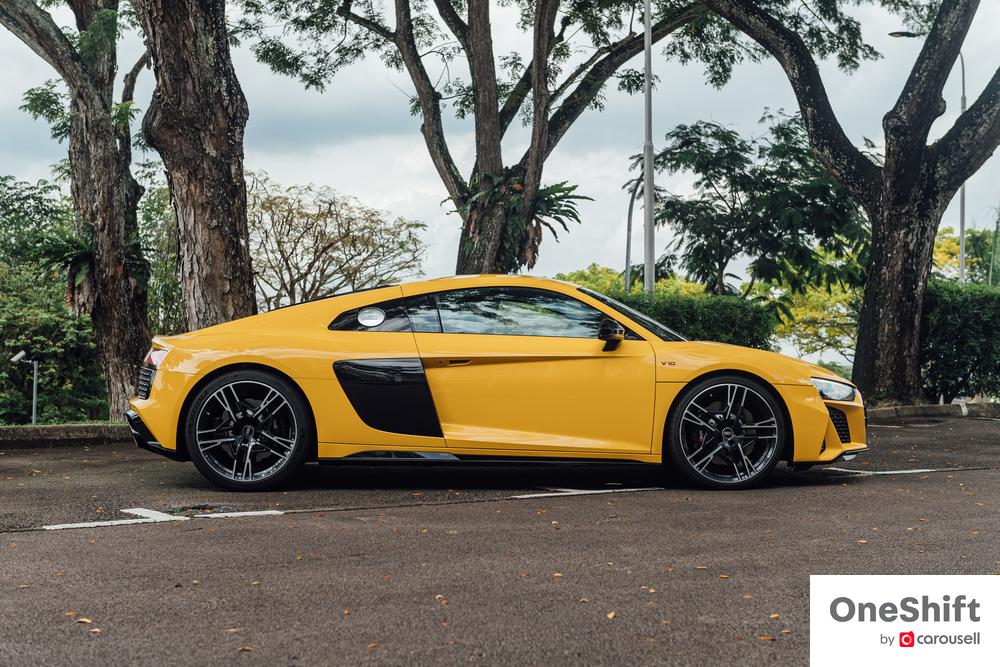 Despite the overhangs from my memories of the first R8, I was readily won over the moment I saw the new R8 in person. Retaining much of the cab-forward, teardrop shape, it is unmistakably an R8. The side blades have been sliced into half, and the lines are generally more angular now, but overall it still spells bona fide supercar in large caps, especially in this hue of Vegas Yellow. 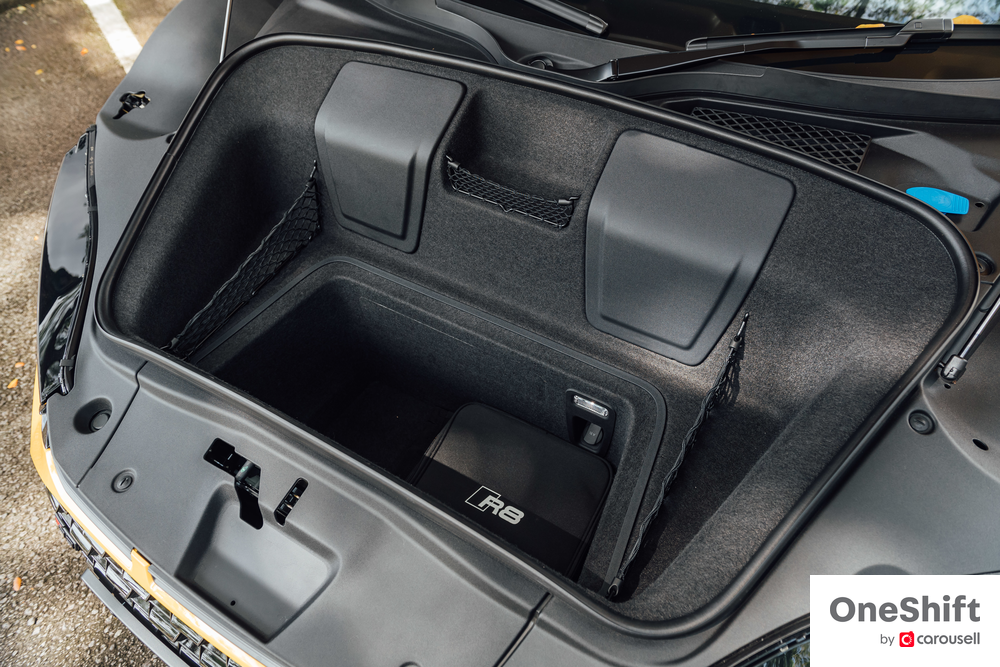 The frunk has usable space which was handy for my son’s school bag (there isn’t much storage in the cabin except for some netted pockets), while bright white LED lights display the V10 through a glass cover in all its glory when it’s dark. There’s just enough theatre for it to feel rather special. 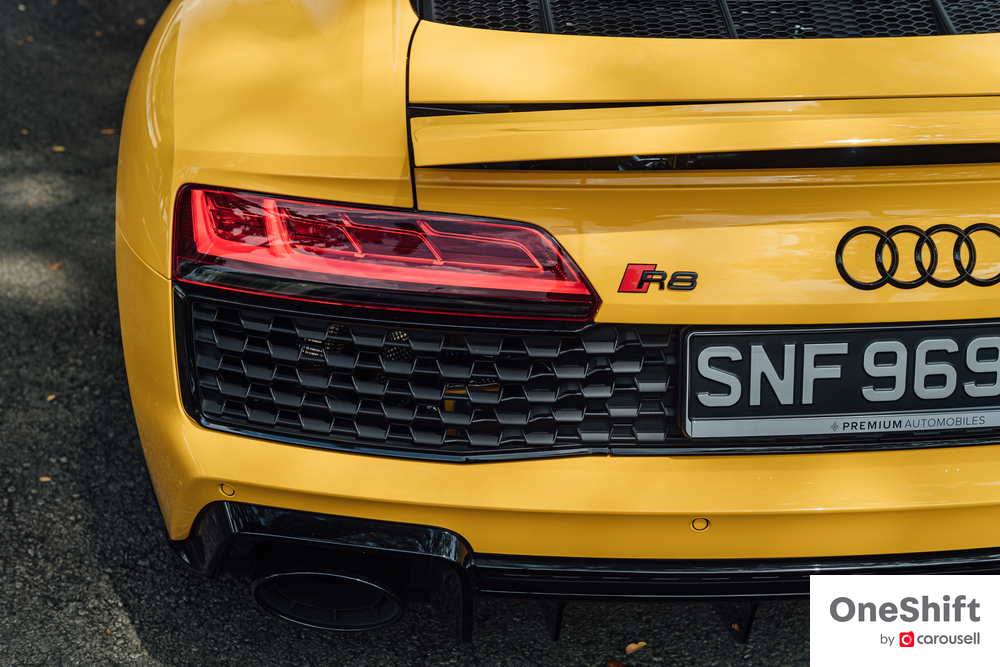 The car has an unusually loud cold start (on purpose, surely) which really brings all manner of warm fuzzy feelings. As if to say, ‘here’s our clarion call for the internal combustion engine’, the V10 is unabashedly loud when it needs to be. Yet after settling to a normal cadence the car can glide through traffic relatively unnoticed, being more reserved and composed than brash and shouty. I really do like it that way for it is an Audi after all, and that’s how it differentiates itself from its haughtier Italian cousin. 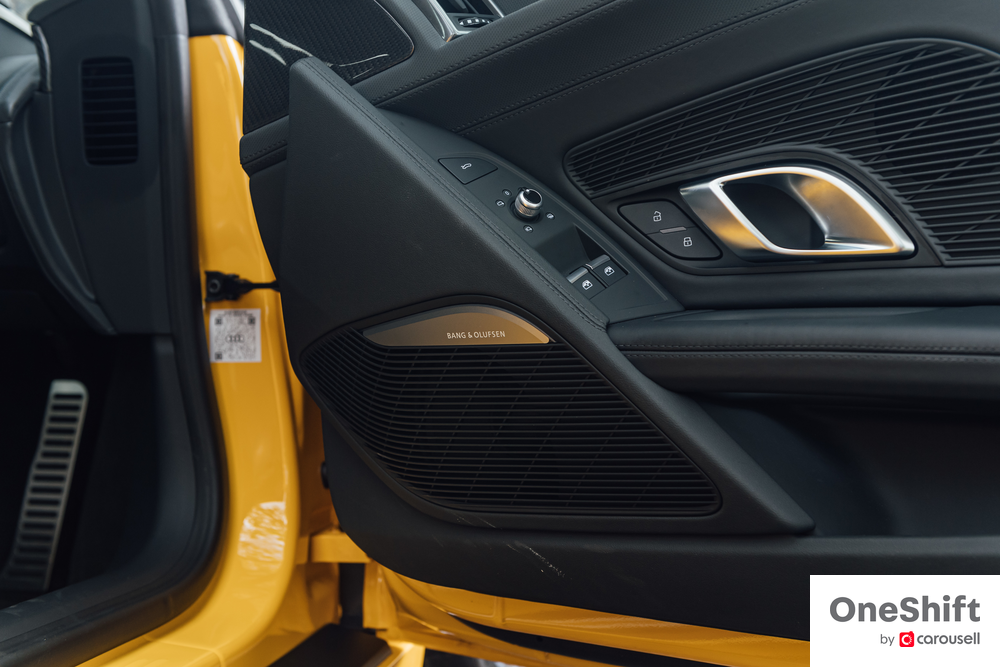 Build quality is also rather terrific and again something that gives the R8 a more sophisticated demeanour. There is more attention paid to the fit-and-finish, as well as the technology onboard. The doors feel hefty and close with a bank vault thud, and the switchgear are all mechanically precise. The luxury within is what I would call sombre, but it’s comfortingly familiar if you’ve been in other Audis before. The biggest change perhaps is the lack of a centre infotainment screen, which has been merged within the instrument cluster. Some thought it made the cluster too busy, but I thought it rather clever to free up space for the interior architecture while also having technology within the line of sight. It allows the race car “monoposto” cockpit design to really flourish in its full form, a continuous arch that cocoons the driver. 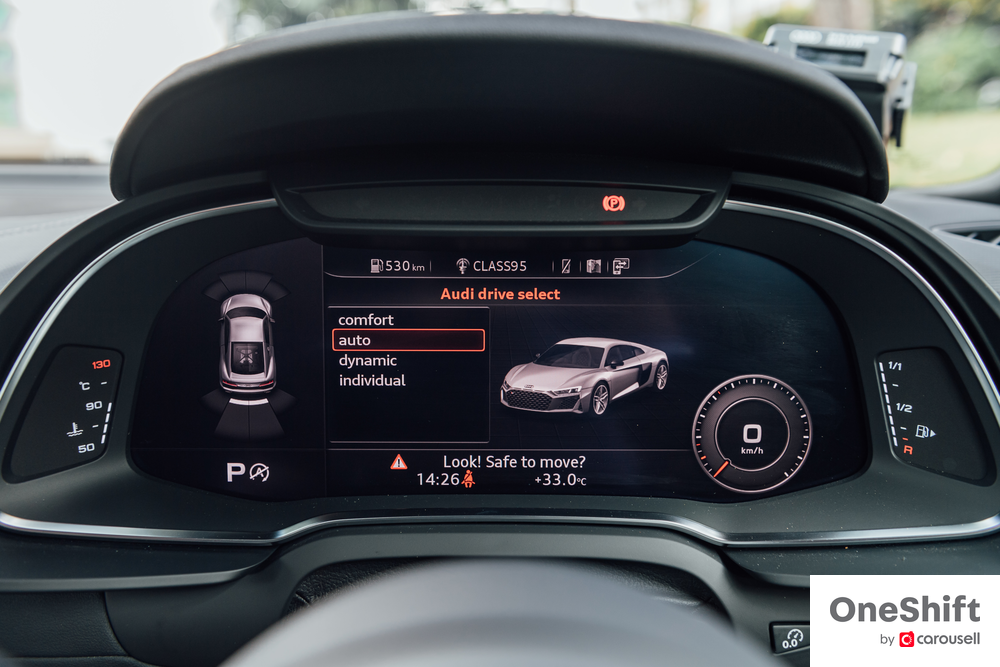 Despite the Iron Man looks, the R8 really is as old school as it gets in 2022. And by old I mean, pretty darn cool. The drive modes have been kept very simple (Auto, Comfort, Dynamic) with minor adjustments (engine/gearbox, steering, engine sound) allowed in Individual, so you get familiar pretty quickly. That’s refreshing when a vast number of new cars are getting overly complicated. 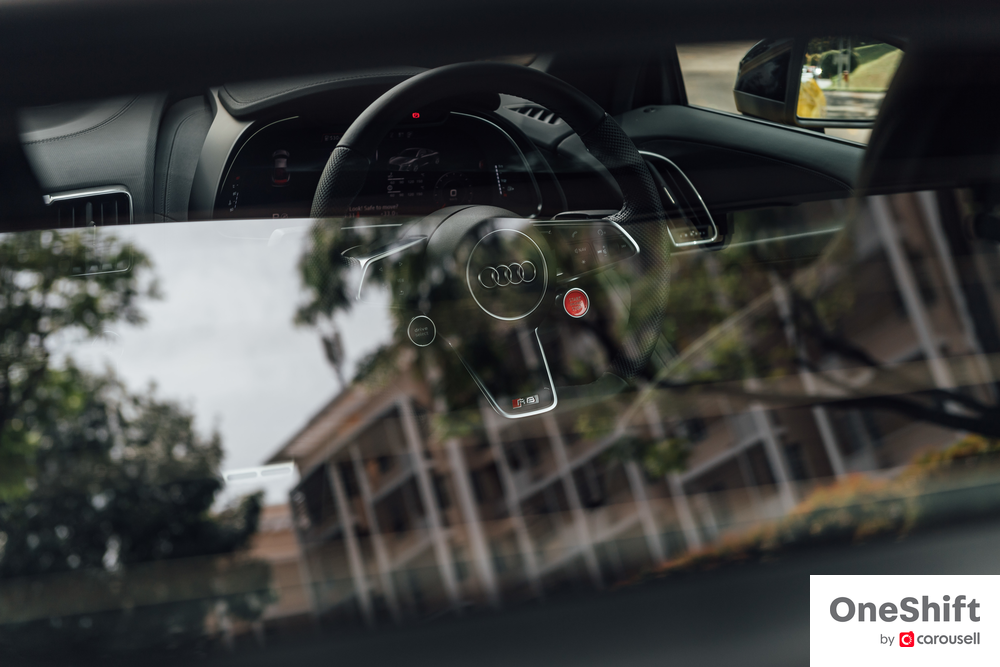 The car comes equipped with specific suspension tuned for RWD and features double wishbones and a passive differential lock. Surprisingly, suspension is non-adjustable (and there’s no option for Audi’s adaptive magnetic ride, at least for Singapore); the ride is generally firmer than what you get in a Porsche 911 but by and large it is still usable on a day-to-day basis. I did yearn for a comfort suspension option at times, though. 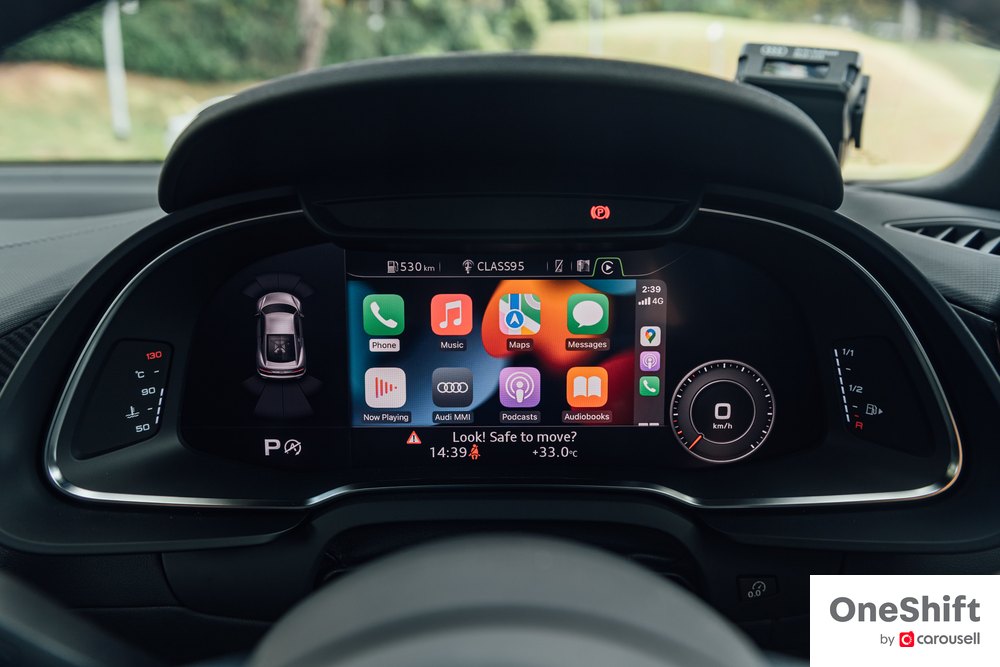 The 7-speed S-tronic gearbox shuffles through its gears like an experienced croupier, but has been made to slur a little in the name of comfort. The engine, well what can I say? It’s an absolute riot and an extremely special motor that will soon vanish from Audi’s line-up. It warbles unevenly below 4,000 rpm but the noises soon gather as the revs rise to an unmistakable V10 shriek at the 8,700 rpm redline that’s hard-edged and sensational. The car can feel less urgent sometimes in this day and age of ubiquitous forced induction, but you’ll be convinced why it doesn’t matter. There is a beautiful story told from the start to the end of the tachometer, with a very civil low end that’s perfect for daily driving, to a raucous top-end that’s life-affirming and mind-blowing. It’s certainly more supercar-like than the V8, which has a more generous low-end but also a tamer top-end. 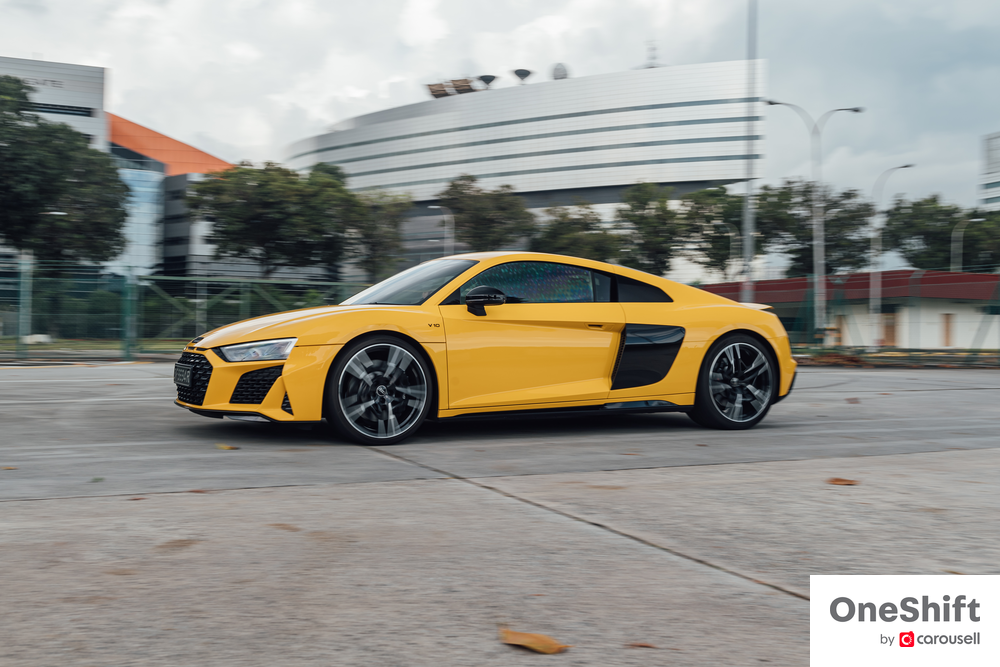 With a naturally aspirated torque curve, the RWD setup does work quite well as it does not struggle for traction often in the dry, yet gives a purer and more agile front end feel (steering remains hydraulic, by the way). If you so desire to go sideways, with ESC in Sport, the R8 will do ‘controlled’ drifts (which of course I did not try). That said, at the higher echelons of the V10, I pined for quattro and I do believe the car will be significantly more exploitable with driven front wheels. 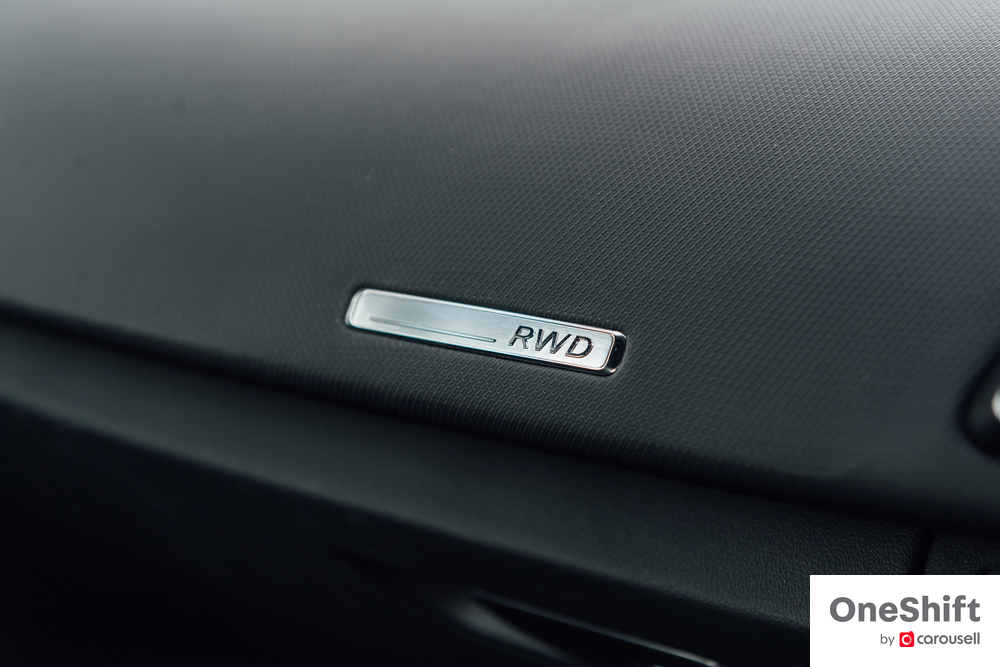 Best of all, I truly believe the R8, like its predecessors, can genuinely be used daily. Front and rear clearance is not a problem for most car parks. The doors give a decent width for entry/exit and it must be said that getting in and out of the car is also a cinch as well. The standard seats specified helped. The air-conditioning is strong, noise levels are acceptable (when the V10 isn’t stretched) and the view out of the cabin is rather good. 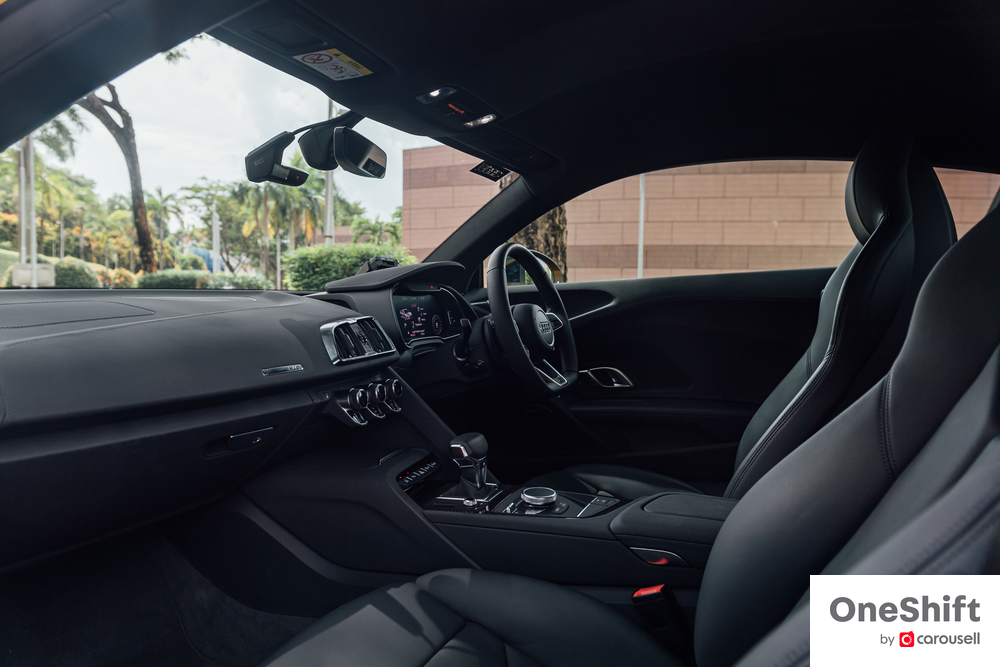 Offering a very unique blend of an old-school supercar in a daily usable package is what makes the R8 an intoxicating mix, but also one that is niche. Perhaps its biggest competitor is the Huracan, which offers the badge and more aggressive looks for not much more. But the R8 is distinct enough to offer its very own flavour of a ‘last of its kind’, and from a mainstream manufacturer at that. If you prefer things a little more discreet, but still want purity of the highest degree that’s accessible every day, there’s nothing quite like the R8.