Blurred Lines With Something Sublime

Another four-doored coupe… what is the world coming to? But we do live in a time where lines are blurred. Somewhere, someone over a decade ago had the brainwave to build a sedan, dropped its roof and extend its roofline, and then went on to market it as a coupe… sacrilege. Share
The straight six pushes out 435hp and 520Nm of torque, while the EQ Boost starter-alternator system temporarily delivers an additional 22hp and 250Nm
What we like:
Ride quality
Quality of cabin
Delivery of drive
Gorgeous styling
What we dislike:
Kickdowns could be a little quicker
Rather narrow boot
Touchpad blocks off left column of buttons

Another four-doored coupe… what is the world coming to? But we do live in a time where lines are blurred. Somewhere, someone over a decade ago had the brainwave to build a sedan, dropped its roof and extend its roofline, and then went on to market it as a coupe… sacrilege. 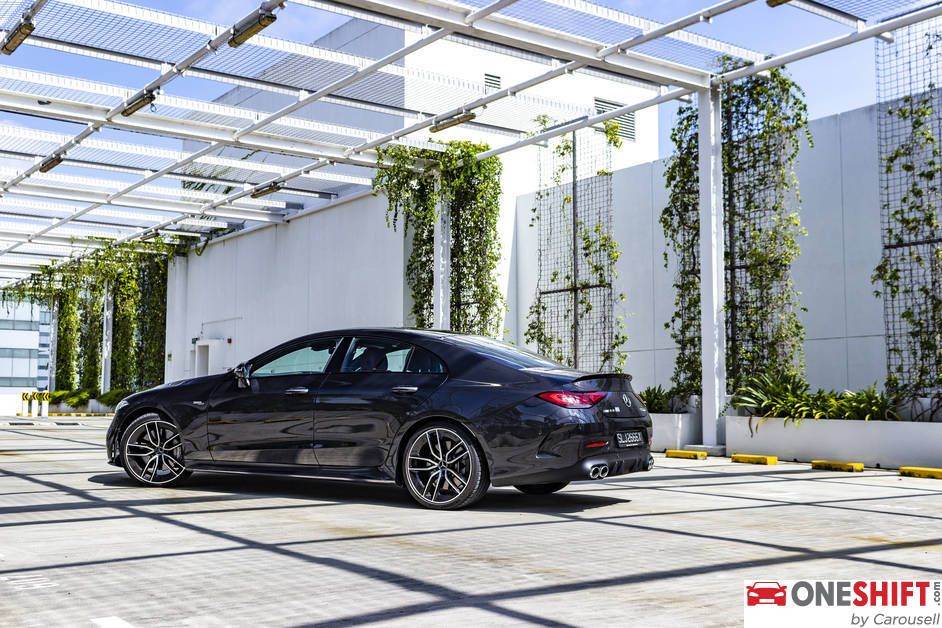 But then no. You see, a coupe with four doors has its advantages, from a lower centre of gravity, way cooler styling... and then there is the practicality (compared to a coupe with two doors, and not a sedan). 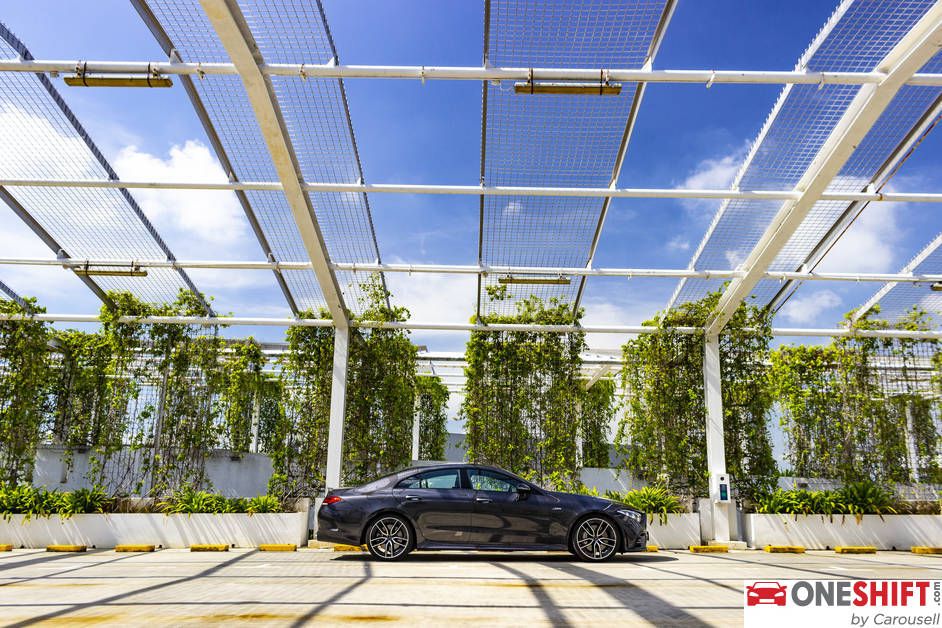 In its third generation, Mercedes-Benz has dropped that squatty potty rear-end styling found on the first two cars, and have now delivered something that truly is visually stunning. They have also cut down on the lines on the side of the car, revealing clearer contours. It does however still retain its arching waistline, similar to the first and second generation cars. 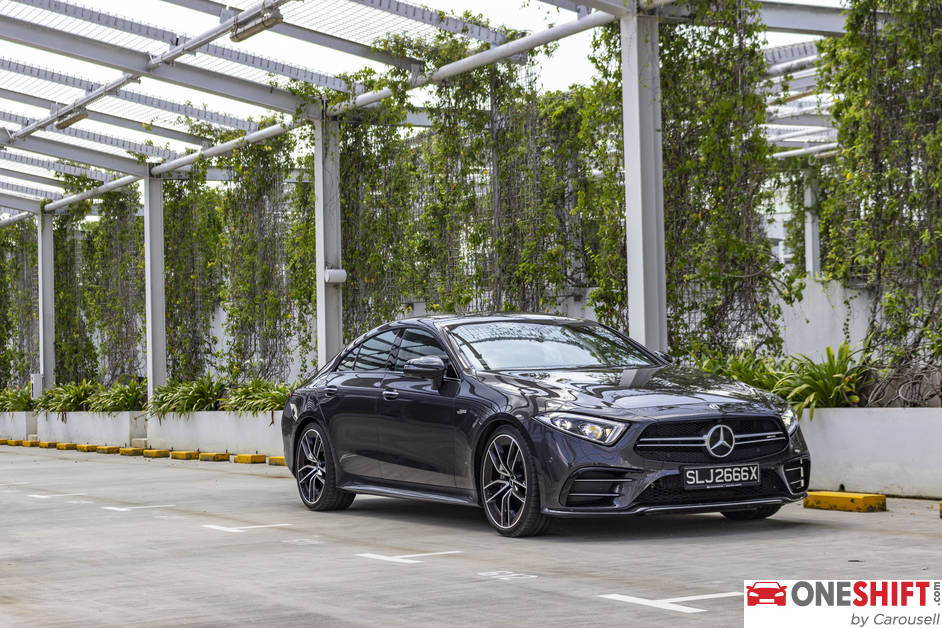 Its new design language also reveals an elegant grille (a nod to the Mercedes-AMG GT) which widens at the base, and visually adds to the aggressively low stance the CLS projects. A large breather on both sides of the bumper takes in air, to cool off the brakes, and also doubles up as the inlet for the air curtain, which helps to reduce the buffering of wind against the front wheels.

In keeping with the coupe styling, the low rake of the windshield is also complemented by the pushing back of the C-pillar.

Both head and tail lamps also have a crystalline appearance, adding that little bit of depth in their design. 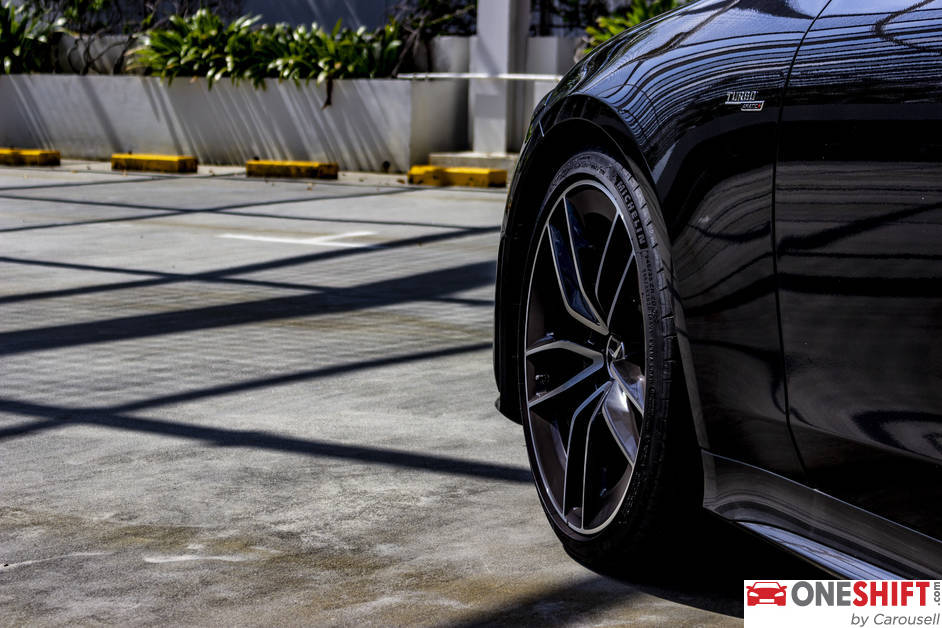 The 53 model also gets larger 20-inch AMG multi-spoke light-alloy wheels painted in black, and highlighted with a high-sheen rim flange.

Our test car features red sports seats wrapped in supple nappa leather, and a thick flat bottomed sports steering wheel, also wrapped in the same cow hide. Like current generation “Mercs”, the CLS 53 also displays its information on a “snowboard” style Widescreen Cockpit, which utilises dual 12.3” screens, one which is for the infotainment system, and the other the instrument cluster, which features three selectable displays. 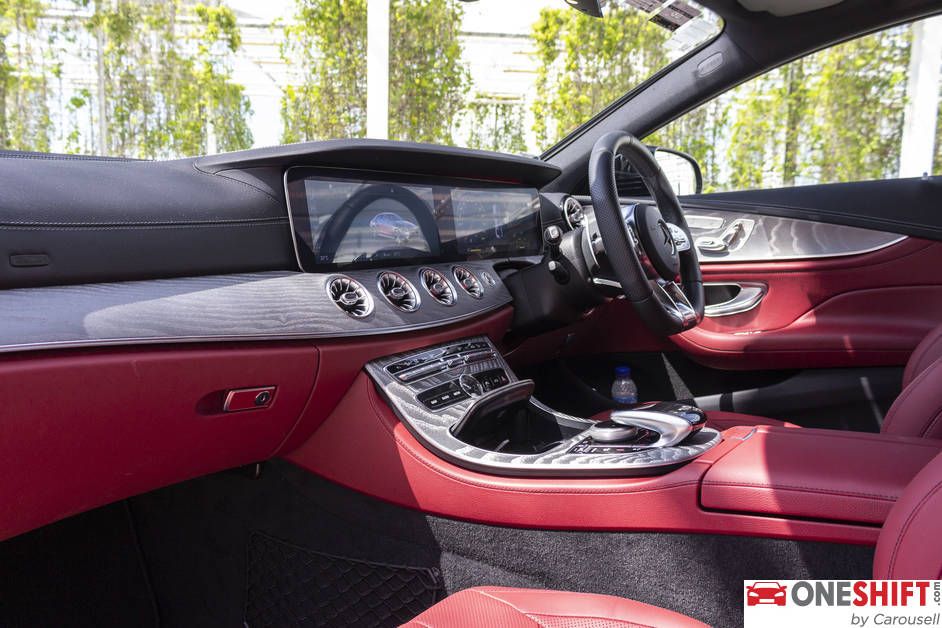 Jet turbine-inspired air-conditioning vents sit tastefully within the dash, which also illuminate as part of the car’s ambient lighting system; 64 colours in all, with 10 different colour themes to choose from… a little gimmicky if you ask me. But overall I do love how the dash tastefully comes together, and the fit and finish is very good. 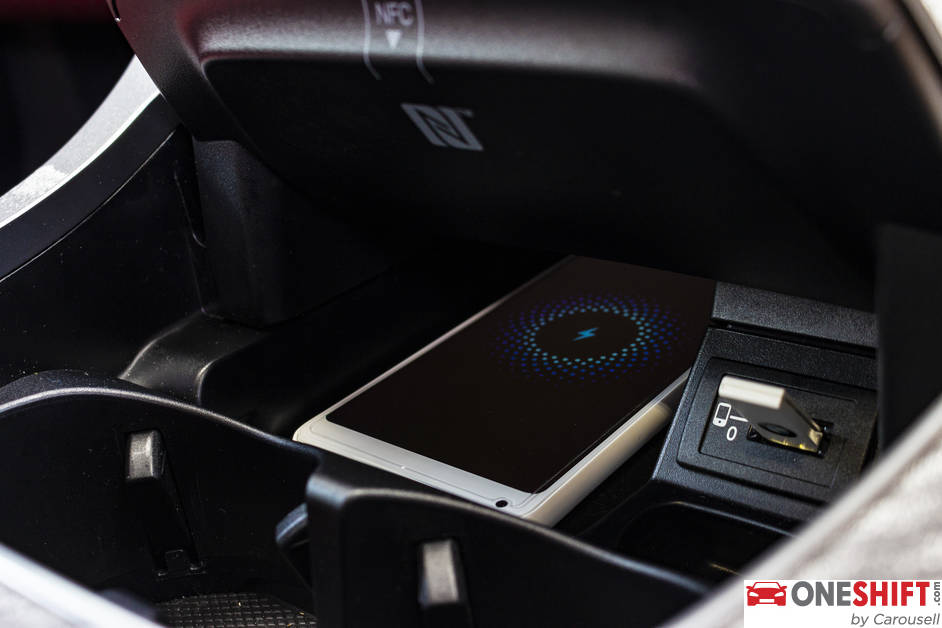 There is however that touchpad, like on most other Mercedes cars, which partially blocks your view of the left-hand column of buttons, which always gets to me. This is especially in situations where I would like to have the Dynamic Suspension stiffened up, and would not be able to tell if one or two lights are on (corresponding to its stiffness). 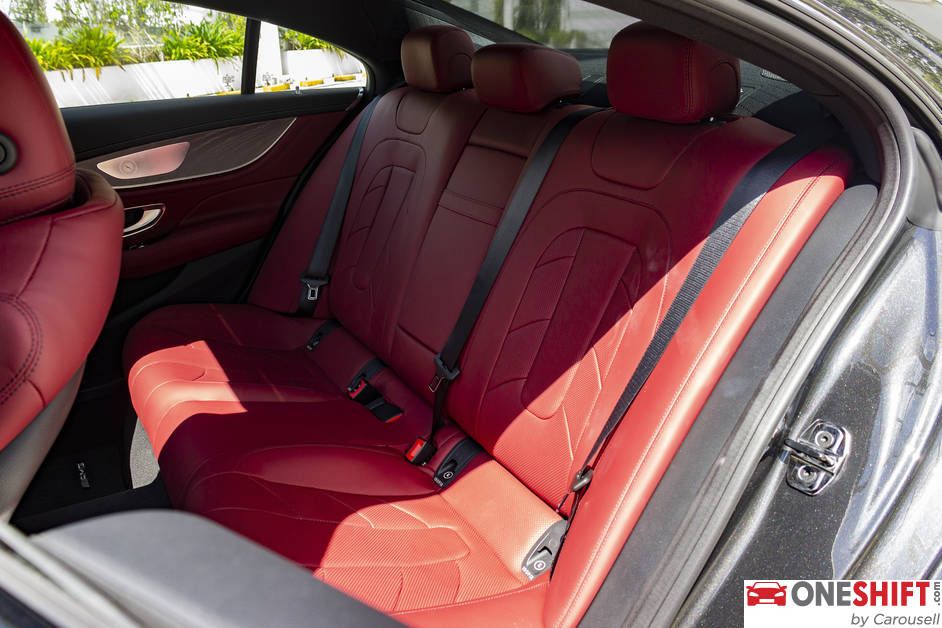 Front seats accommodate well, and they do have enough shape to hold occupants in. The rear outer seats have also been styled to mirror the character of those in the front, and they do quite a good job also of holding you in. The middle passenger though, will have to make do with lesser bottom area, and a high tunnel between the legs. The sloping roof of the car, while it does bring the rear glass closer to the heads of the rear occupants, however its low seating ensures that there is enough headroom for even moderately taller passengers. 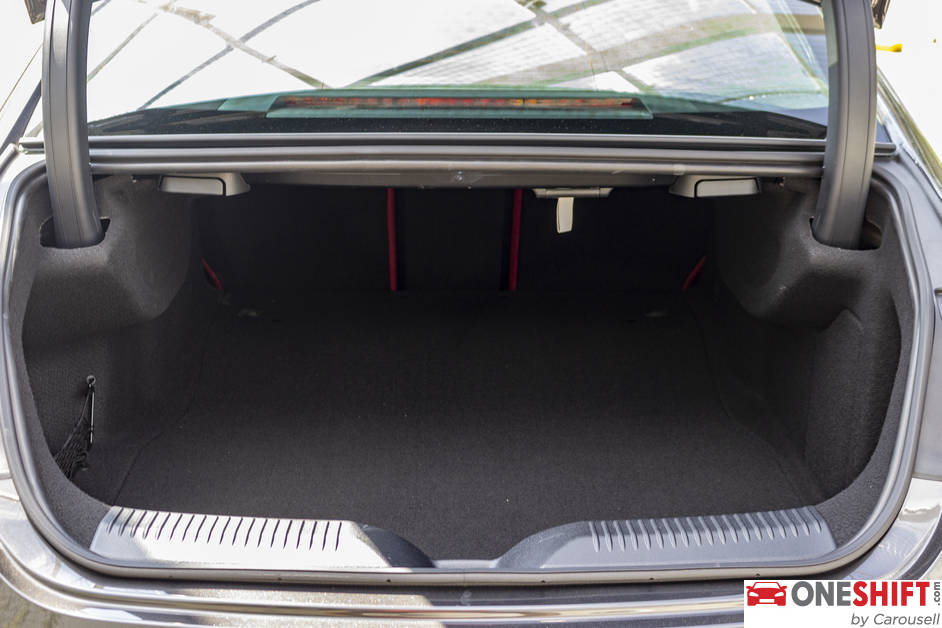 The 490 litre boot is decent in size, although the load area is rather narrow, and I would believe that the only way for a set of golf clubs to go in is diagonal. For added room, the rear seats do fold in 40:20:40 style, and can be unlatched from the boot itself.

A new inline six-cylinder twin-turbocharged 3.0 powers the CLS 53. While Mercedes could have gone with the V6 found in the 43 cars, they had decided to go the way of mild hybridisation for their new coupe. The new engine, although a straight six is still rather compact, due to the reduced bore size (83mm versus the 88mm of the 43 engine… yes yes, the 43 is set with 3-per-bank), meaning that the cylinders take up less space. Also since it runs on a 48 volt system where the EQ Boost starter-alternator sits between the transmission and the engine. In doing this, the engine does not require a belt up in-front. The smaller footprint would also mean that in theory, it could essentially fit into a car with a smaller engine bay (something like a C-Class). The other plus for Mercedes is, in building a straight-six, they save on componentry cost and production time, since there is only one head and one pair of cams to produce. 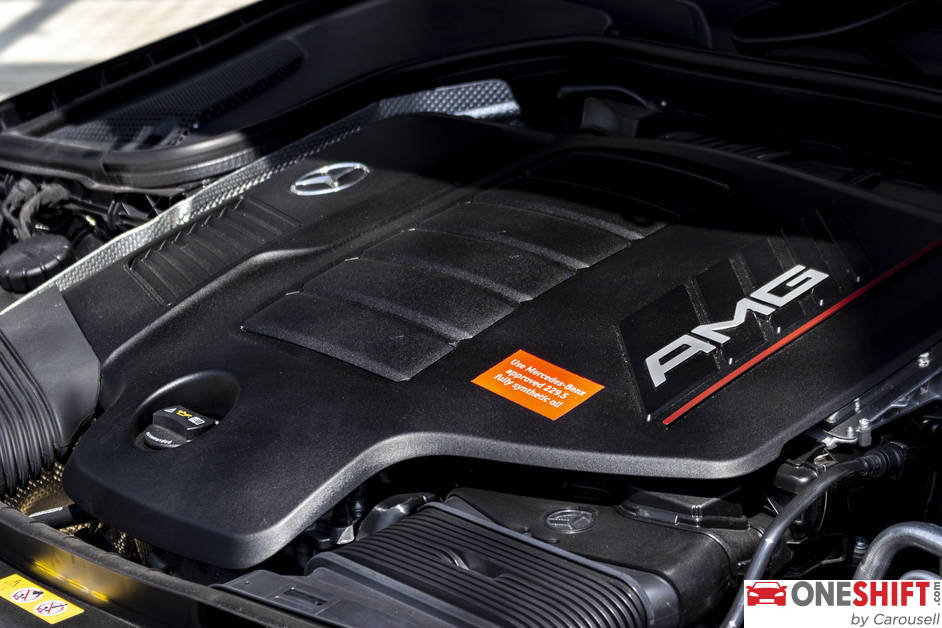 The straight six pushes out 435hp and 520Nm of torque, while the EQ Boost starter-alternator system temporarily delivers an additional 22hp and 250Nm, through an electric auxiliary compressor, which in essence is like an electric supercharger if you may, which feeds the boost into the turbochargers, before the latter is able to get enough exhaust to spin on their own. The system greatly reduces turbo lag, where there is boost almost just after idle speeds. Acceleration is however still fluid, and in SPORT+, there are enough pops from the exhaust for a sporty-inspired drive; and its century sprint takes only 4.5 seconds. 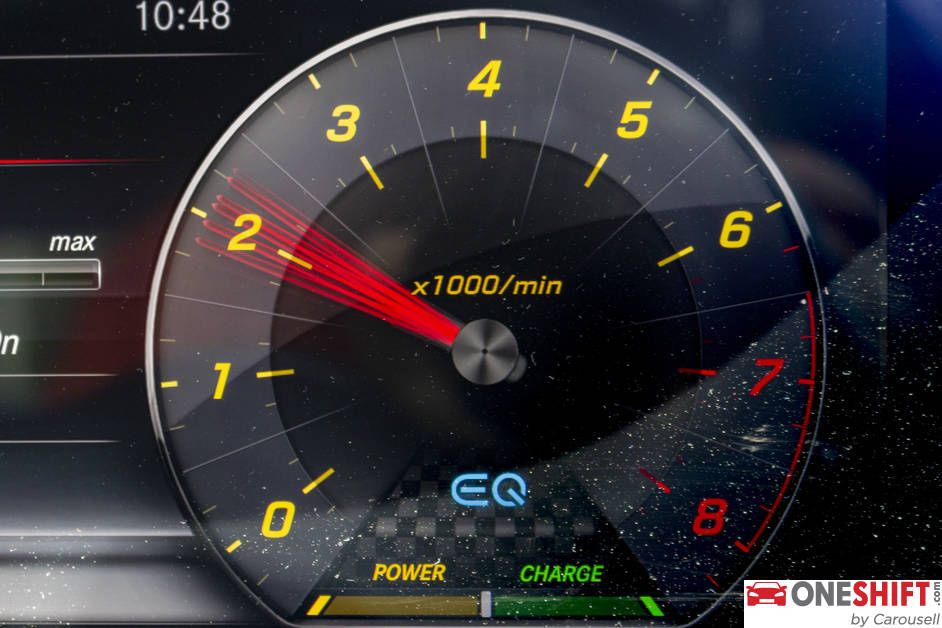 In ECO mode, you to coast with the engine shut-off, allowing you to do your small bit to save the planet (cue the dolphins), while the electric motors do the driving. The 48-Volt system also supplies energy to all the essentials to ensure that creature comforts are kept running and all safety systems function.

Handling-wise, the CLS happily tucks into corners with confidence, with drive provided to all four wheels with a bias to the rear wheels, through its fully variable all-wheel drive AMG Performance 4MATIC+. However, we would like that the AMG SPEEDSHIFT TCT 9G transmission would be a little less hesitant in gearing down. 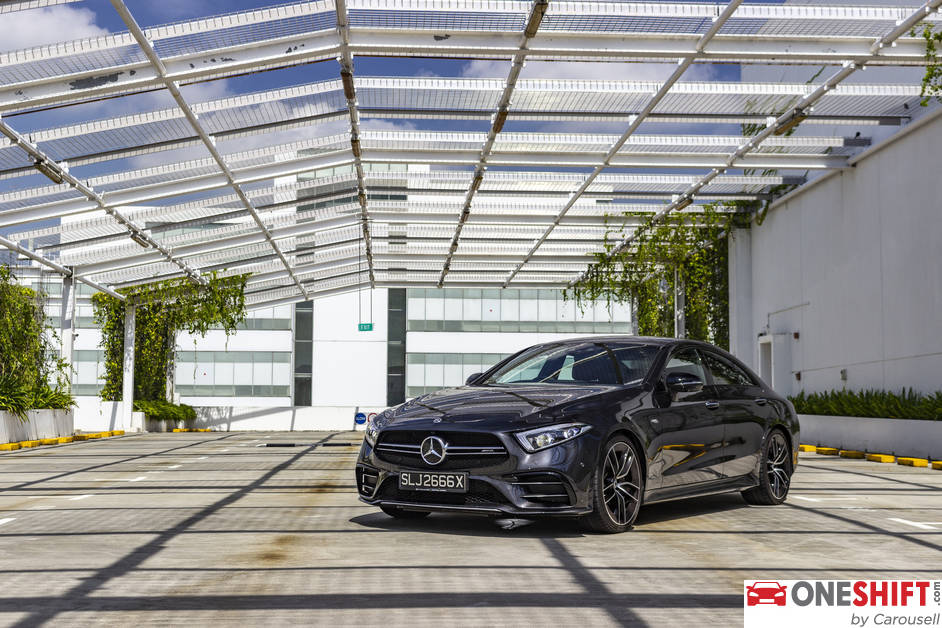 The CLS can prove to be just as a good everyday car, when you dial down the air suspension, with a good amount of play to please the in-laws. Cabin insulation is also very good in keeping unnecessary noise out, even with those frameless windows.

The new CLS features neater styling than its predecessors, and goes up directly against Audi’s S7 (that is if it does come to our shores). And while it does have a sporty nature, it is as enjoyable taking it for a spirited drive as a leisurely one.