The Audi Q8 is the German brand’s latest addition to their Q car model lineup. Audi’s new flagship SUV joins the Q7 in the same market segment. While the Q7 competes with the likes of the BMW X5 and Volvo XC90, the Q8 could loosely be seen as a crossover (after all, the ‘crossover’ word is loosely used), or a (very tall) coupe; and takes on cars like the coupe version of the Mercedes-Benz GLE, and within the VW Group family, the Porsche Cayenne (yes yes there is a coupe version out there, but the body shape of the Q8 matches the SUV version)… talk about family rivalry. 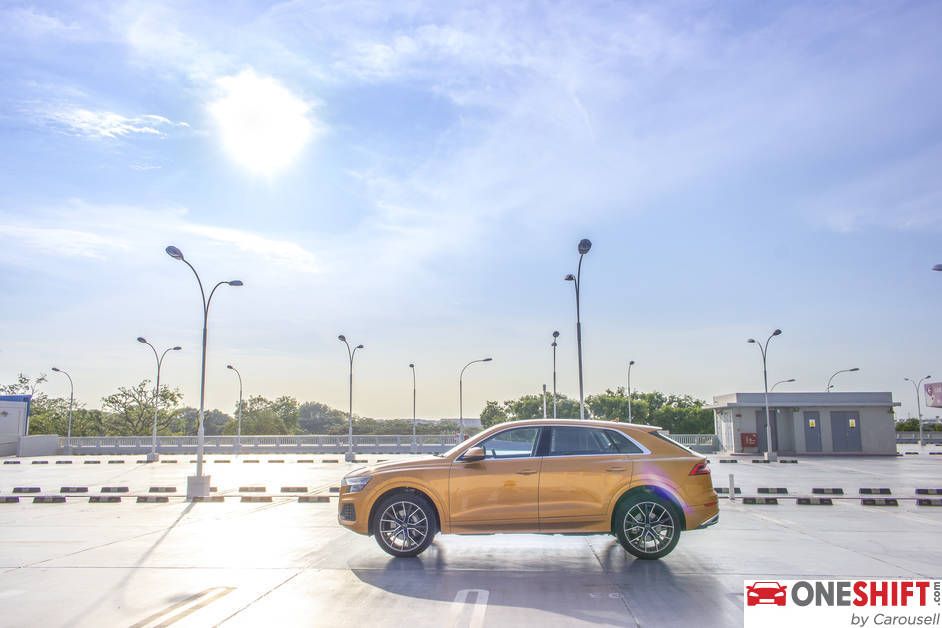 The new Q8 sits lower and has shorter overhangs than its Q7 sibling, and is wider by 27mm. Its wheelbase however is generally the same at 2,995mm, just 1mm more than the Q7. A new massive singleframe octagonal grille, coupled with a thick surround in body colour, which can also be specced in a Matte Platinum Gray finish; defines the Q8’s larger-than-life persona, almost to the point of being toy-like. Headlamp assemblies at the far corners combine the car’s array of LED lamps, with daytime running and dynamic turn signal lights sublimely integrated with each other. 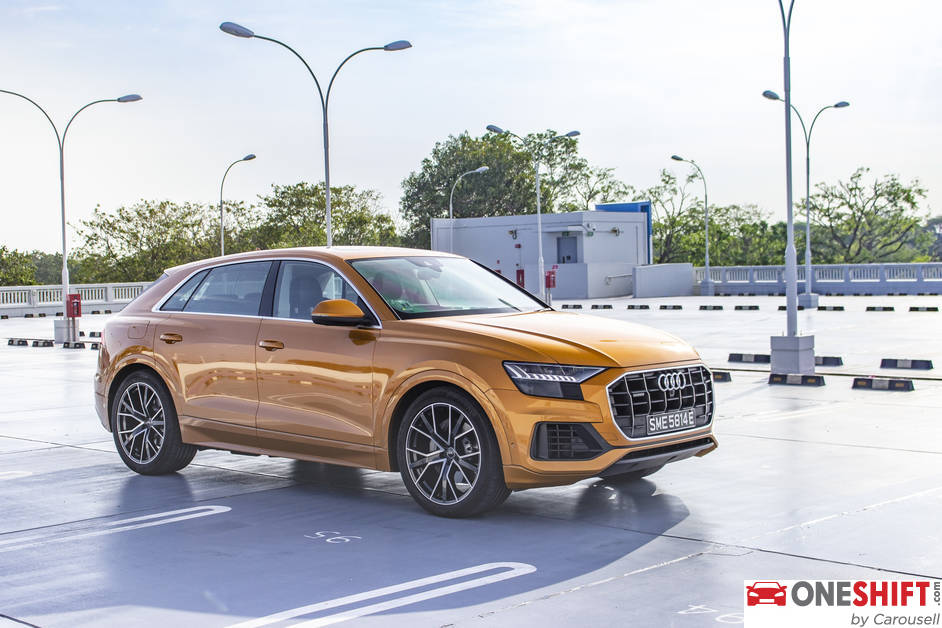 Muscular quattro blisters adorn the side of the Q8, further emphasising its girth. Its sloping roofline, is however does not slope as aggressively as cars from competing brands (meaning that headroom at the rear is still very good). 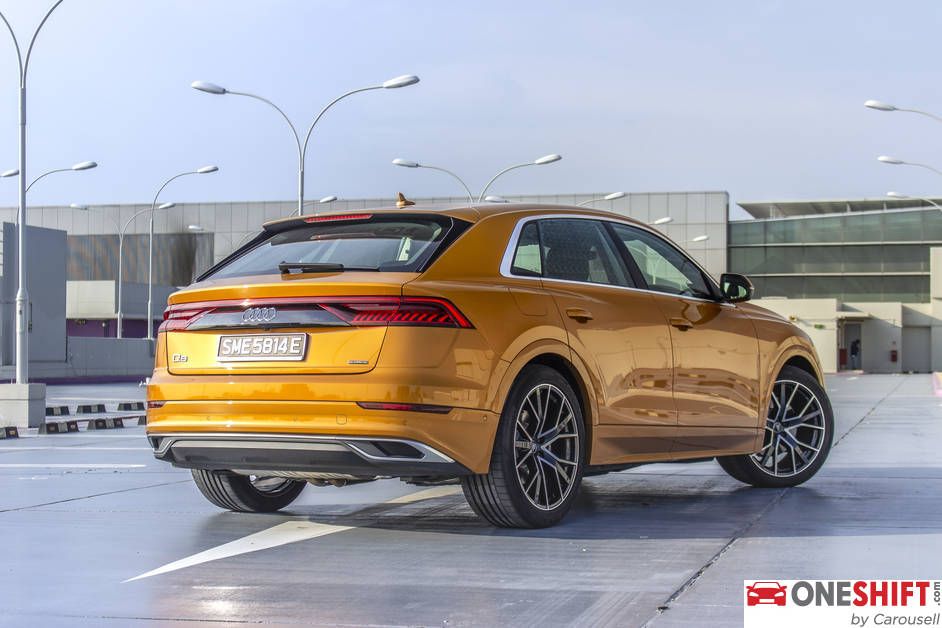 Like all present-day Audi cars, the Q8 is also equipped with dynamic turn signals, which are sited within heavily sculpted tail lamp lenses, similar to larger cars in Audi’s range. As a homage to the legendairy Audi Ur-quattro from the 1980s, a black strip, this time above (as opposed to below) the license plate, “hold” the tail lamp assemblies in-place. 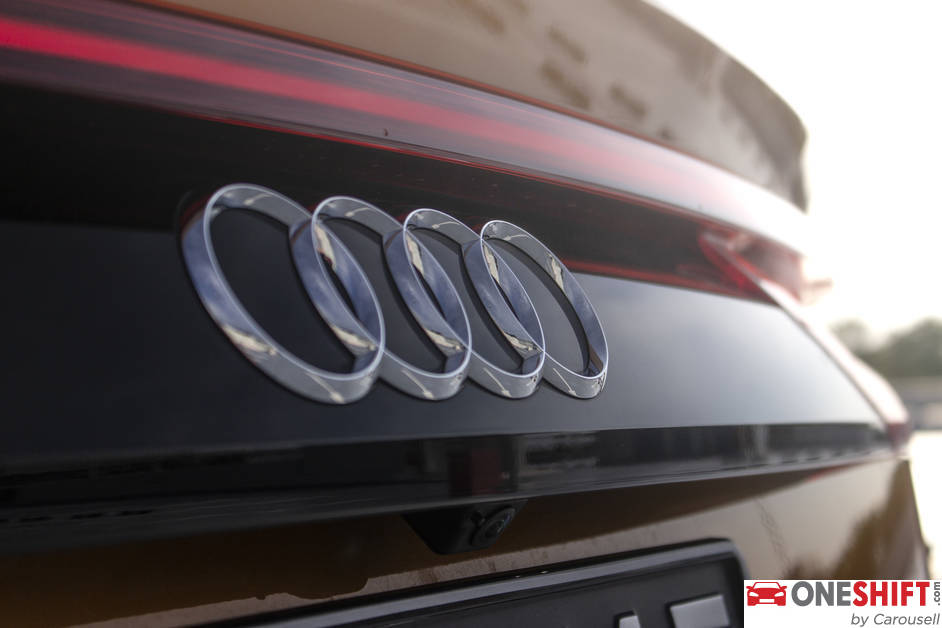 Our test car is equipped with optional 5-V-spoke star style Audi Sport cast alloy wheels which sets you back an additional $15,729 over the standard 20” ones…. Well worth it if you believe that your eyes are the window to your soul… and that your soul enjoys them.

Audi is known for their quality interiors, and the Q8 does not disappoint. With the Q8, Audi had also gone with a visually simple layout, similar to the A6 and A8. However, unlike their flagship sedan, they held off incorporating those neat retractable air-conditioning vents. Audio is provided via a Bang & Olufsen Advanced Sound System, which delivers 3D sound, and with height information to all five seats. 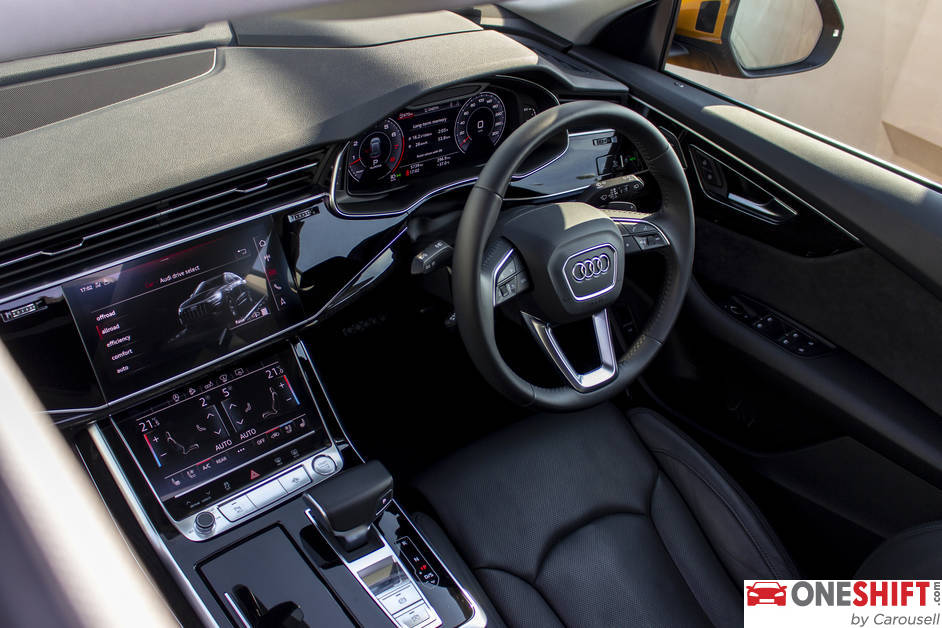 Like the A6 and A8, the Q8’s MMI touch response screens are stacked, with a 10.1” and 8.6” upper and lower, both units are oriented slightly to the driver for easier reading; and sprung for a better haptic feedback experience. The upper screen controls infotainment and car settings, while the lower unit functions as toggles for climate control and other convenience functions. Behind the wheel, 12.3” the Audi Virtual Cockpit delivers driving information with loads of flexibility, and is further complemented by a head-up display. 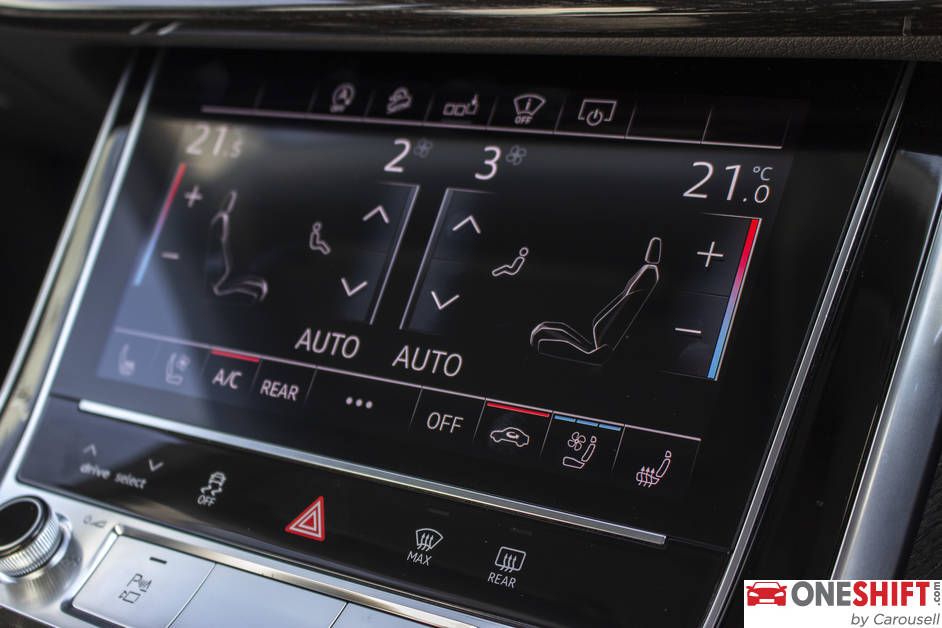 Rear passengers also get a touchscreen climate control panel, which may be a little low for easy reach. While a rear armrest set of controls would have been a better idea, Audi did not carry this through from concept stage; we believe that in doing so, it would have added quite a good deal to production cost. In doing away with the armrest controls, the Q8 seats up to 5 in comfort, while luggage capacity is at a generous 605 litres, with rear seats folding down to accommodate 1,755 litres. Loading and unloading is also a breeze with the rear air suspension lowering the car, at the touch of a button. 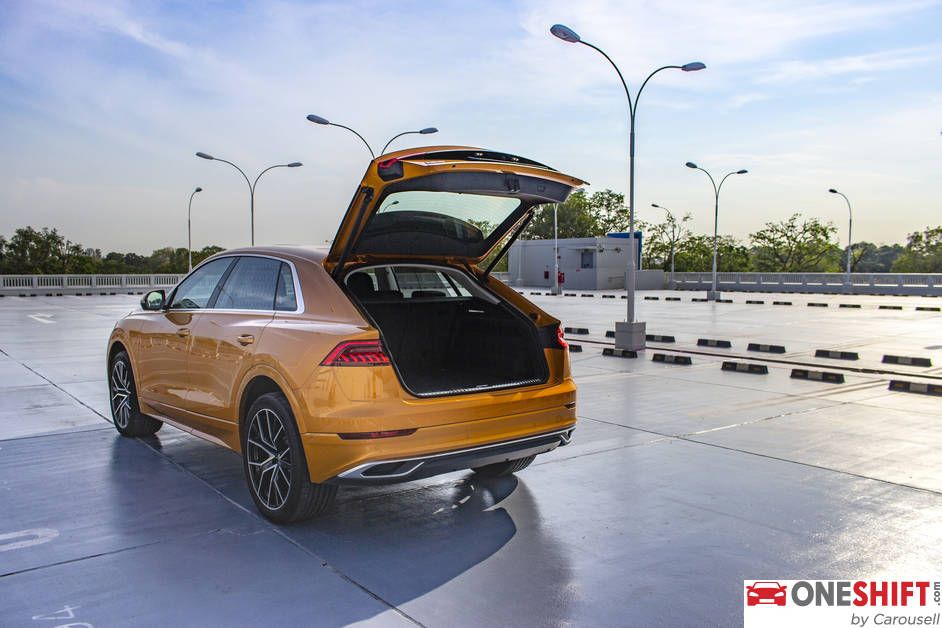 Our test car is powered by the heavily proven Volkswagen/Audi/Porsche 3.0 V6 turbocharged engine. Good for 340hp and 500Nm from a generous spread from between 1,370rpm to 4,500rpm. 0-100km/h on the Q8 is an impressive 5.9 seconds, with gear changes done via a 8-speed Tiptronic transmission, driving all four wheels. The Q8’s quattro system delivers a torque split to the ratio of 40:60 front and rear. If conditions call for it, the transfer of torque can be sent to the front or rear, as much as 70% and 85% respectively. 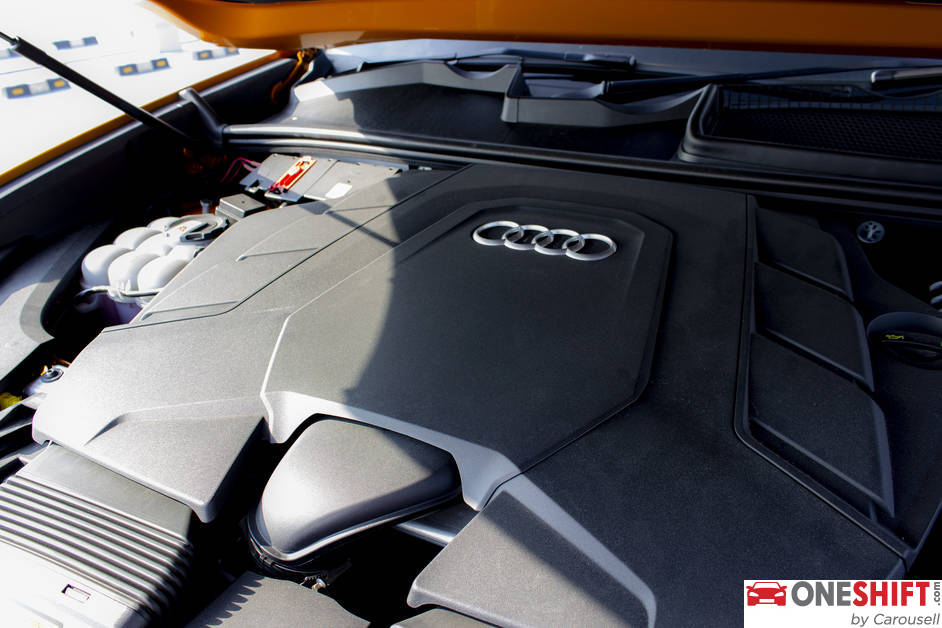 The Q8 is also equipped with a 48V mild hybrid system which features a lithium-ion battery and a Belt Alternator Starter (BAS). This system does not drive the car, but takes care of most electrical needs of the car.

The Q8’s is able to coast from speeds between 55km/h to 160km/h for up to 40 seconds, all of this with the engine shut off. The BAS is able to scavenge 12kW of power from when the car decelerates; and is able to quietly restart the engine, delivering quite the seamless driving experience. Saving a few more drops of fuel each time, the start-stop functions from 22km/h. Audi claims that the system is able to save up to 0.7 litres per 100km. Combined fuel figures stand at a lab tested 11.2km/l. 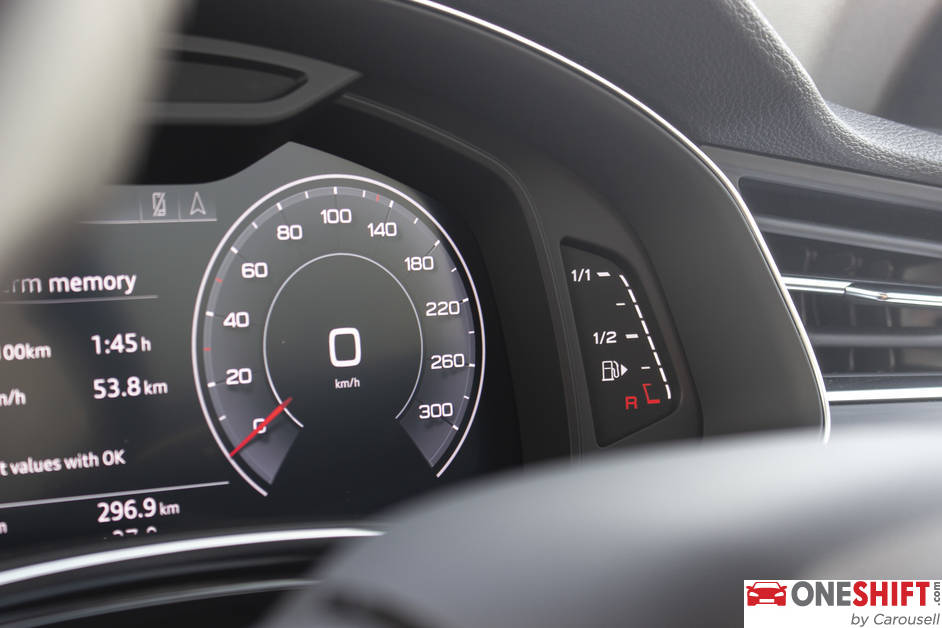 Thanks to the adaptive air suspension, the Q8 can be further lowered by 40mm for better on-road stability in “Dynamic” drive mode, or when speeds exceed 160km/h. In offroad mode, the suspension can be raised by 50mm to deliver as much as 254mm of ground clearance.

One cannot escape the sheer size of the Q8 when maneuvering the car in tighter quarters. Fortunately, our test car was equipped with the available all-wheel steering, sold as a package together with the sunroof. The system allows for a 5 degree opposite turn angle, when driven at speeds below 60km/h to help steer out of tight confines. At higher speed driving, the system then allows for a 1.5 degree same direction turn, which helps to provide added stability when switching lanes, similar to a car with longer wheelbase doing so. Large car no-doubt, but it does actually feel a little shorter than it’s 4.99 meters. However, the steering does not feel as sharp as other Audi models. 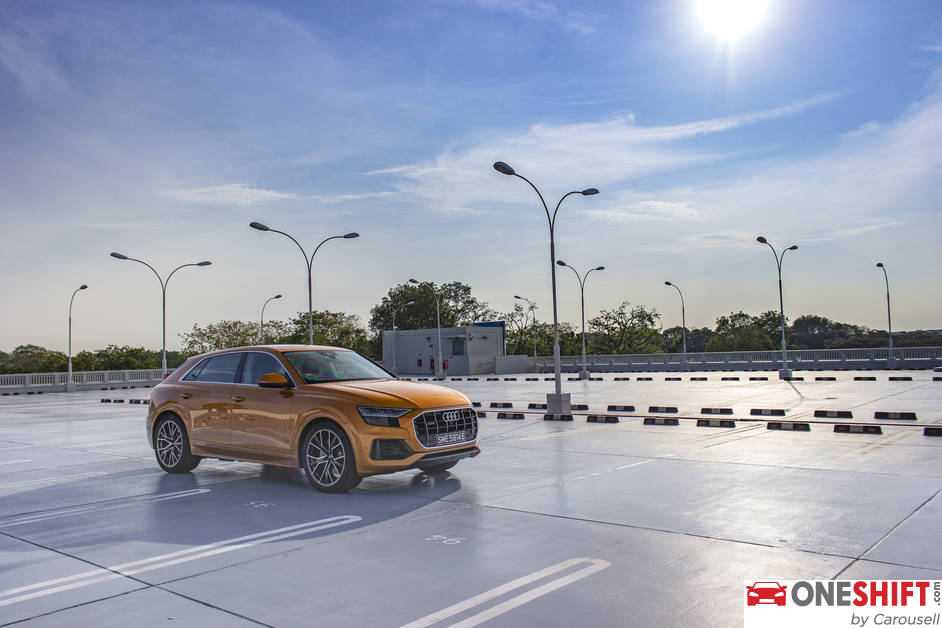 In-car refinement is further helped by some very good sound insulation, and a double-layered windshield, which helps to block out most of the exterior noise. Given its size, the Q8’s 0.34Cd drag coefficient figure is impressive too.

Where the Q7 did not leave so much of a deep impression, as compared to similar offerings from Mercedes-Benz, BMW and even Volvo. The Q8 on the other hand does simply turn heads with its larger than life personality, and technologically-advanced offerings.