The first-ever 2 Series BMW Gran Coupe made its debut, shortly after the launch of its sister car, the 1 Series. Taking design cues from their flagship 8 Series Gran Coupe, the BMW 218i Gran Coupe provides a “sedan alternative” for the premium segment buyer; and joins the rest in the oddly fielded even-numbered 2 Series range, together with the likes of the the Active Tourer, and 2 Series Coupe. Share
Taking design cues from their flagship 8 Series Gran Coupe, the BMW 218i Gran Coupe provides a “sedan alternative” for the premium segment buyer
What we like:
Beautifully penned bodywork. Handling. Interior quality.
What we dislike:
Engine sound isn&rsquo;t going to win hearts
could use a four-cylinder. Rear seats can only be unlatched from within the boot.

For an entire model run, Mercedes-Benz had the whole whitespace to themselves with the CLA Coupe and its Shooting Brake Sibling. Despite a few shortcomings, it was a cleverly planned product, and Daimler knew that there was demand for a premium compact sedan, which fit below its Compact Executive C Class. Styled like a coupe, and aptly termed as one, it was a massive hit among buyers here. BMW now has one of their own, in the form of the 218i Gran Coupe. 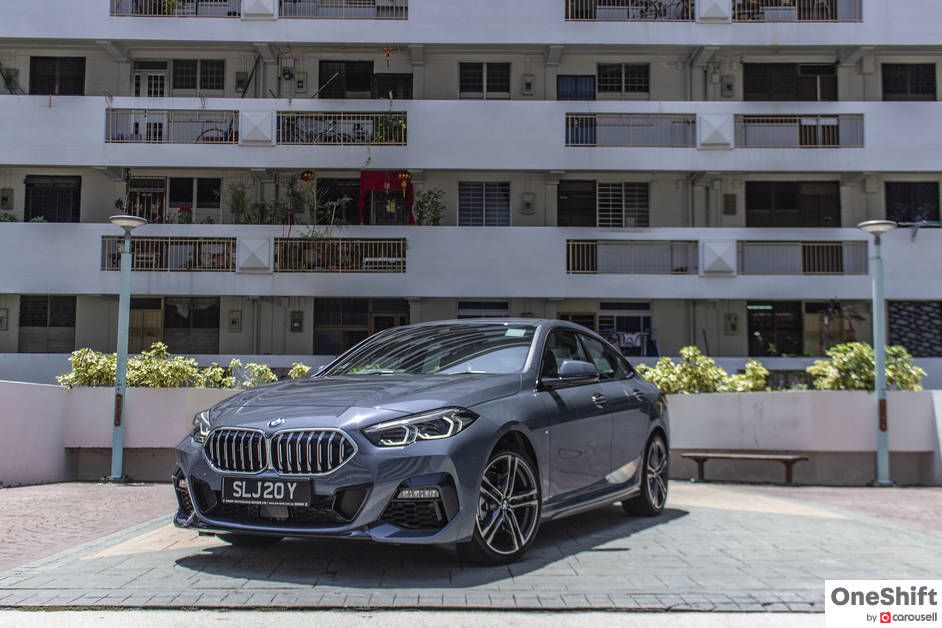 The first-ever 2 Series BMW Gran Coupe made its debut, shortly after the launch of its sister car, the 1 Series. Taking design cues from their flagship 8 Series Gran Coupe, the BMW 218i Gran Coupe provides a “sedan alternative” for the premium segment buyer; and joins the rest in the oddly fielded even-numbered 2 Series range, together with the likes of the the Active Tourer, and 2 Series Coupe.

The all-new German-built BMW 2 Series Gran Coupe boasts an eye-pleasing stretched silhouette, and embodies the brand’s new design language, with large untouched surfaces, punctuated by just a minimal use of crisp lines for some added character into its body shape. 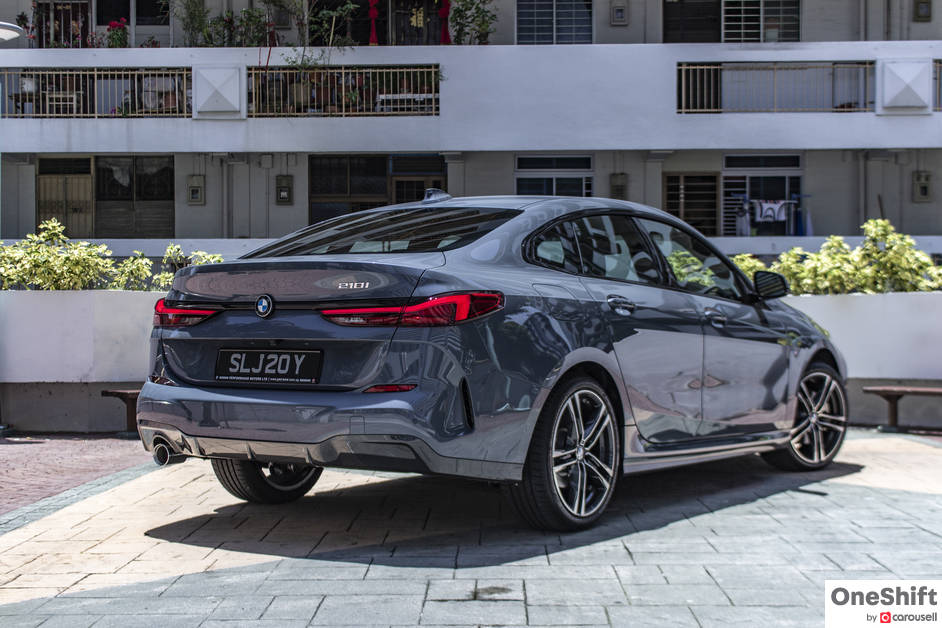 Together with the coupe styling, BMW had included frameless windows, a little detail you would hardly notice, unless the car’s doors are open. Its large kidney grille, and pushed-out intakes, visually amplifies its low and broad-set stance; while rear-end treatment sees a hint of influence from the 8 Series and even the X4, where the latter is also categorised as a coupe under BMW’s design directives.

With a dash lifted right out of the 1 Series, the carryover of quality from cars like the 3 Series, (the 330i Luxury was awarded the 2019 Oneshift Car of the Year Award, against a number of deserving makes and models), is a welcome improvement compared to the previous 1 Series, where it did not benefit from a scatter of cheap feeling bits of switchgear. We would expect this, since after all, the second generation Mercedes-Benz CLA has also switched up on their quality game. 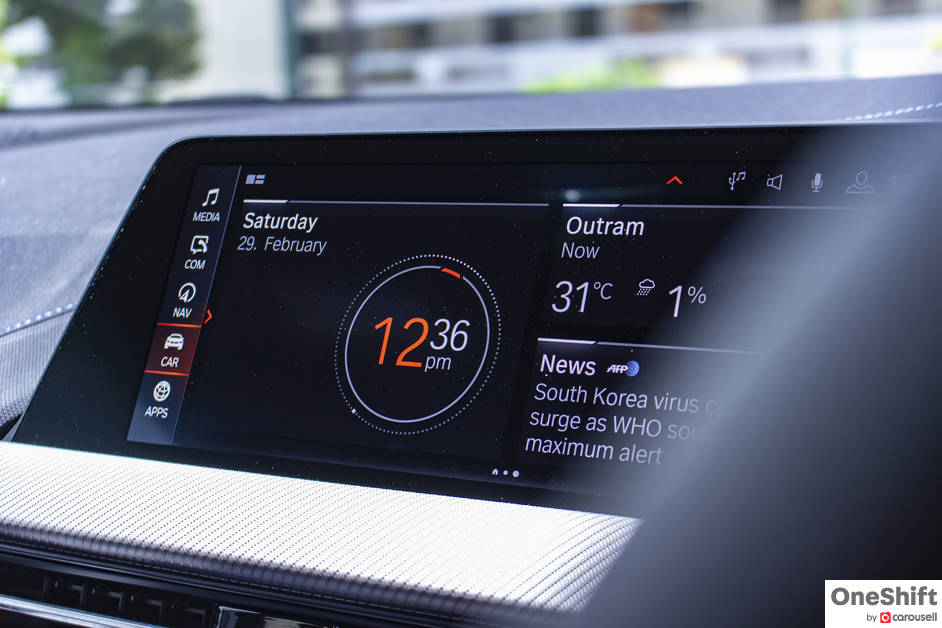 Like the rest of their recently launched range, the 218i Gran Coupe is equipped with the new BMW Operating System 7.0, which is fronted by two 10.25” screens on the BMW Live Cockpit Professional. 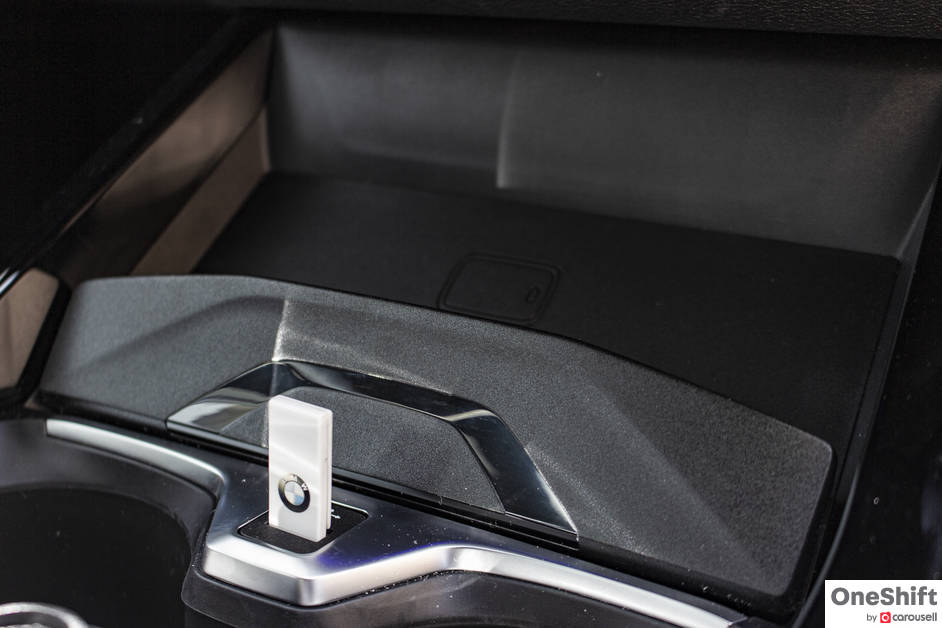 In customary BMW fashion, the centrally-mounted Control Display screen, which displays the entertainment and car’s settings is slightly angled toward the driver, together with the vents and controls it sits above. Like the 1 Series, the 218i Gran Coupe is also equipped with a wireless mobile phone charger (a must-have in my books). In moving with technology, the Gran Coupe offers USB-C ports, they have however done the right thing by retaining one USB-A port, just in-case there is a need to use it. 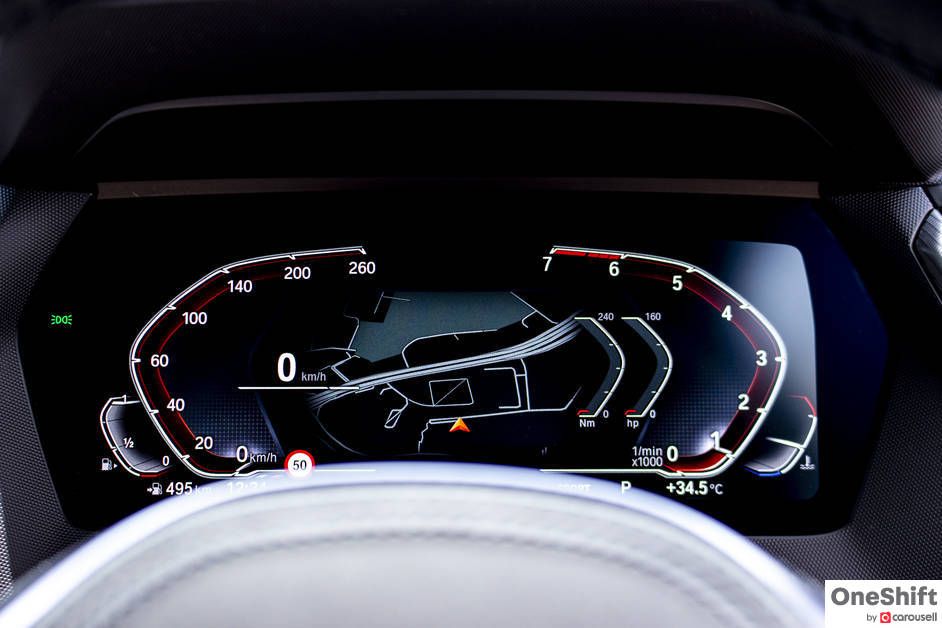 Voice control with the activation phrase “Hey BMW” opens new ways to how you can toggle the car’s settings. My personal favourite is “Hey BMW, I’m bored!”, which switches the car into “Sports” mode.

Also as a first for both the 1 Series and the 2 Series Gran Coupe, a digital instrument cluster as standard equipment, also means greater flexibility on how that display can be used, great especially when you need to rely on your SatNav. 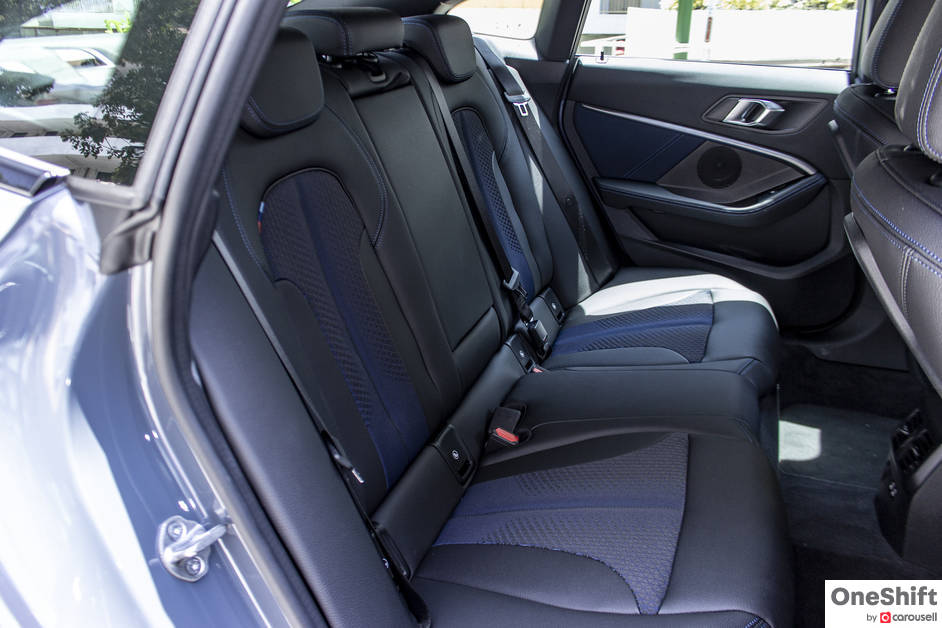 BMW’s decision to switch to a front-drive setup, with the use of their UKL2 architecture (which the larger MINI cars like the Countryman are based on), means that packaging is further improved due to the East-West positioning of the engine, which sacrifices less in-terms of passenger room, compared to a traditional longitudinal setup. 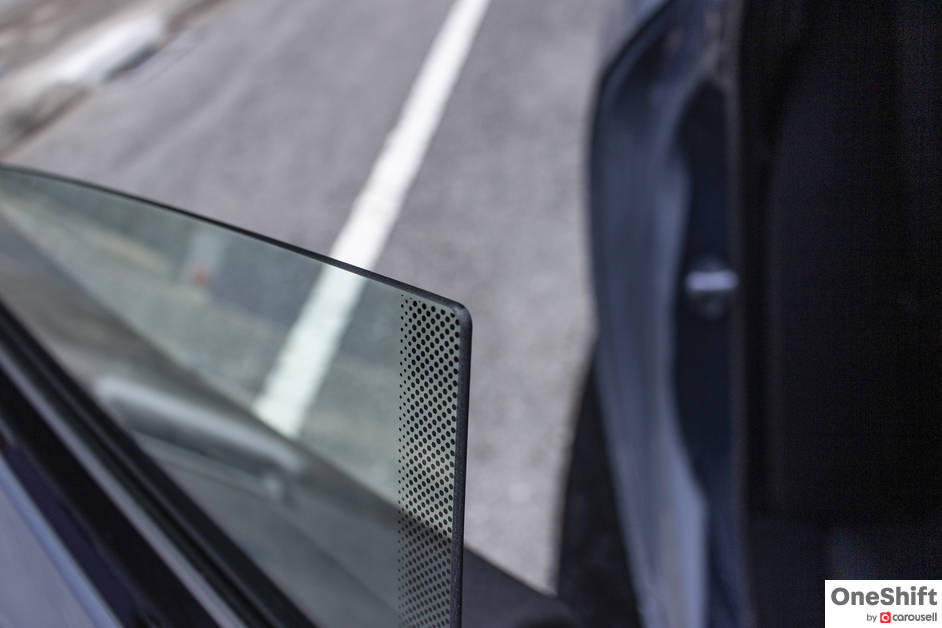 Front driver and passenger seats are supportive, and include adjustable thigh cushions for added comfort. The sloping roof, and the shortened door aperture of the Gran Coupe (compared to the 1 Series) will mean that you duck a little more to get into the rear. Headroom for left and right rear passengers though is easily sufficient. You would however at-best fit a child into the middle, due to the reduced headspace caused by the placement of the third brake light. 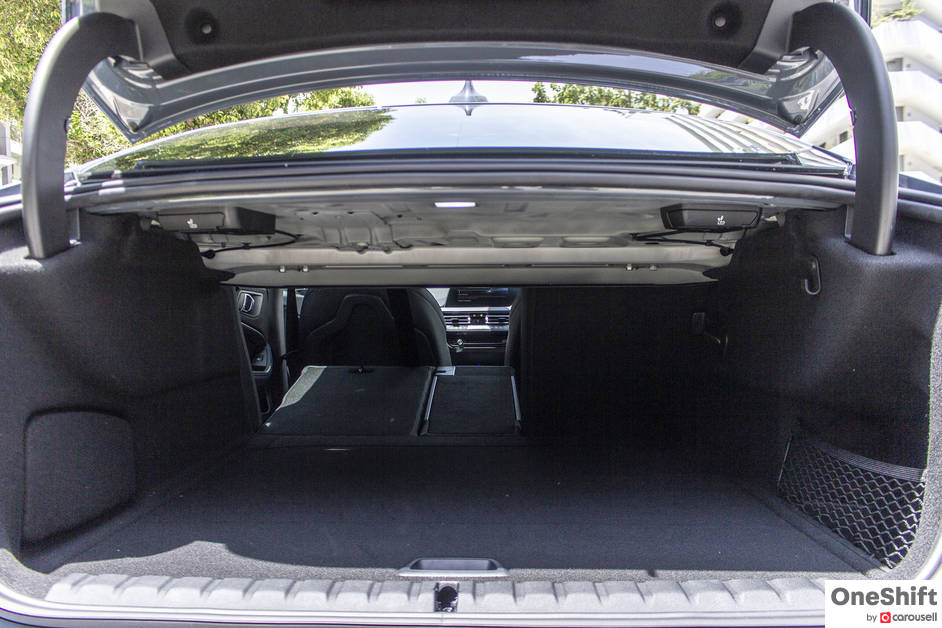 Cargo space at 430 litres is decently good, and is 50 litres more than the 1 Series hatchback (the Mercedes-Benz CLA boasts 460 litres). This can be increased by dropping the 40:20:40 rear seats. Folding of the rear seats can only be done from the boot, via a pair of pull tabs. However, you would only be able to fold the middle seat alone from the inside of the car; it would have been great if BMW had included release tabs from within the cabin for the left and right rear seats.

BMW’s 3-cylinder turbocharged 1.5 litre powers the 218i Gran Coupe, delivering 140bhp and 220Nm from between 1,480 to 4,200rpm. Drive to the front wheels is via quick-shifting 7-speed Steptronic dual-clutch transmission. An expansive band of torque translates to ease of drivability. The seventh gear is built for cruising at low revs, to keep fuel consumption low, at a respectable combined 16.9km/l. 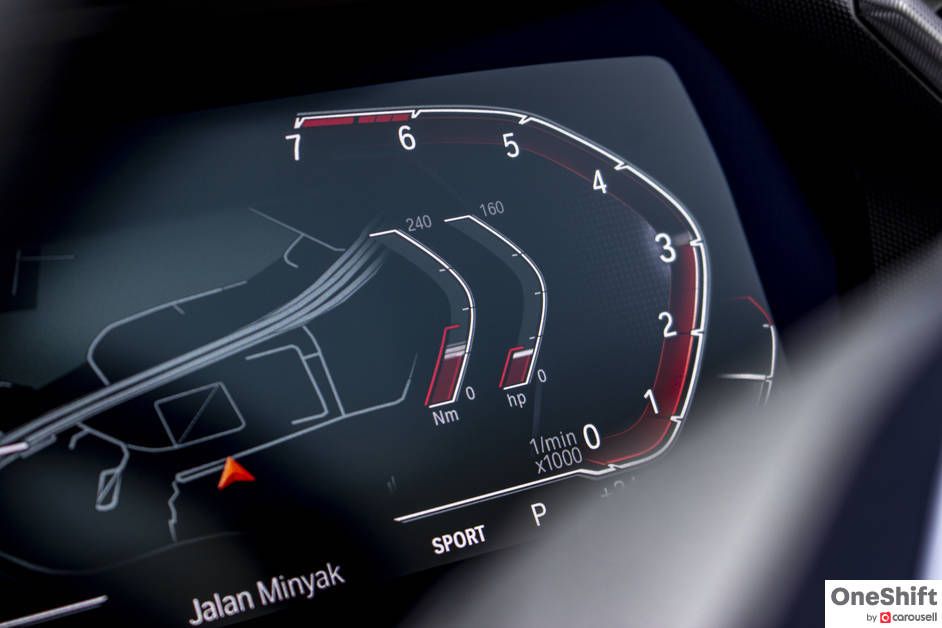 BMW has also worked on reducing wheel slip, and how quickly the car responds to it, through its ARB (near-actuator wheel slip limitation) technology, with placement of the system within the engine itself, for quicker communication. Handling is further improved through the use of BMW Performance Control (yaw control), which brakes the inner wheels when taking a corner. Understeer for this front-drive coupe is minimal when flicking it around the turns; and while you know you could enjoy this with more power from the engine, our M Sport variant, with the firmer springs and 18” M wheels, and tyres with shorter side wall, is already heaps of fun turn-by-turn. 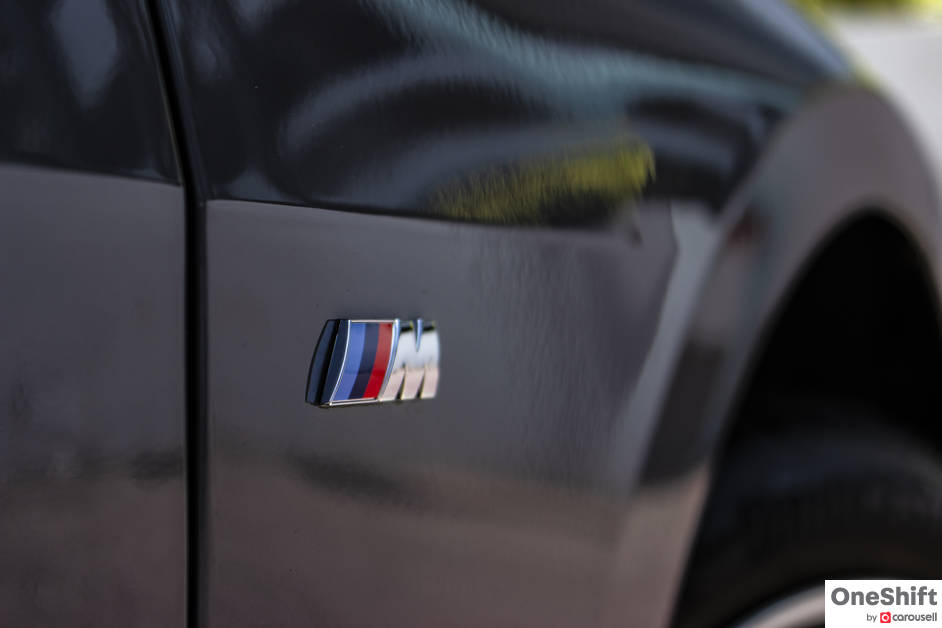 Acceleration to the 100km/h benchmark at 8.7 seconds (0.2 seconds slower than the lighter hatchback) is decent, and we feel that it is sufficient performance for most buyers of the Gran Coupe. Interestingly enough, the 1.5 litre engine does come with an overboost function, which momentarily increases engine torque by 10Nm in 4th gear or higher, though it is barely noticeable as the car works through the gears, even under a lead foot. 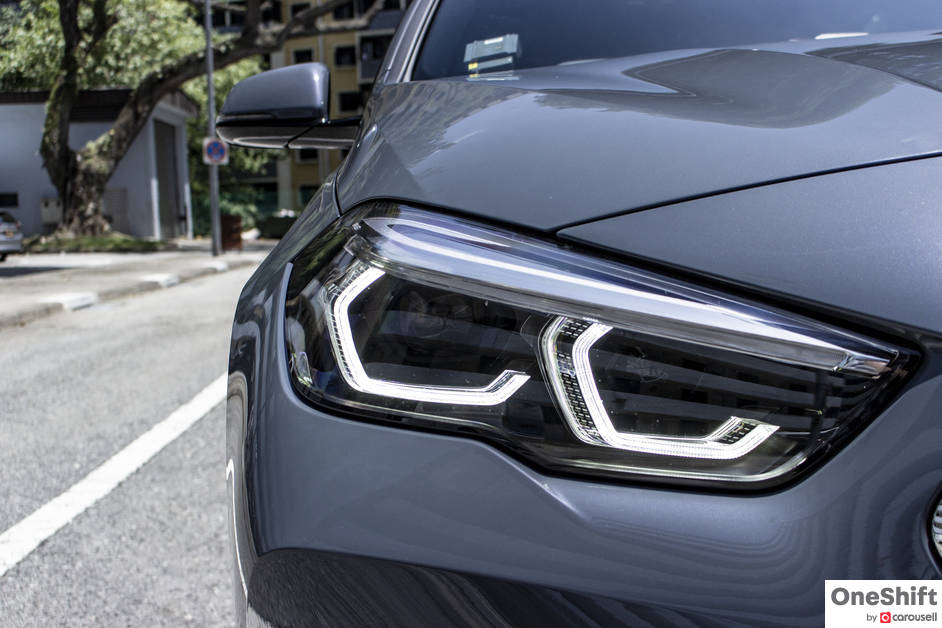 Safety and convenience equipment, like BMW’s new Reversing Assistant, which autonomously reverses the car through the path it had just taken, up to a distance of 50 meters, makes it easier for you to back-track out of tricky situations; while the BMW Driving Assistant, which includes Lane Change and Departure Warning, and the Front Collision Warning, with Brake Intervention, are standard for both the Luxury and M Sport models.

The BMW 218i Gran Coupe does not come cheap. Starting from $157,888* for the Luxury model. You could purchase a full-sized sub-premium model, with cash to spare. But if you are looking for an entertaining drive, while getting your foot through the door of a luxury brand, and especially if it has to be a four-door coupe, you now have this pleasant option to consider.

For those who prefer a more comfortable ride, the Luxury model, with the standard suspension, would be quite the ideal setup. Drivers who would love to explore the best of the Gran Coupe’s cornering abilities should opt for the M Sport model, which is a $3,000 increase, which includes fancier exterior kit, and a firmer setup, which is still comfortable enough for daily driving.