As the late Raymond Lai (who drove the first generation A7) once mentioned, that the Rover SD1 was an iconic design for its time. Back then, the British manufacturer decided to go against the grain (of fielding a ubiquitous sedan) by introducing an executive “lift-back”, which delivered the versatility of an estate car, and looked sleeker than a sedan; with the only problem being Leyland, and the car… well it’s doors fell off. Share
Audi has been well known to deliver among the best interiors in the industry, and the A7’s interior is no exception
What we like:
Handling
Smooth engine
Beautifully styled
Quality of its interior
What we dislike:
Large rim and thin tyre combo might not be the best for noise and comfort
Dual screens magnets for fingerprints

As the late Raymond Lai (who drove the first generation A7) once mentioned, that the Rover SD1 was an iconic design for its time. Back then, the British manufacturer decided to go against the grain (of fielding a ubiquitous sedan) by introducing an executive “lift-back”, which delivered the versatility of an estate car, and looked sleeker than a sedan; with the only problem being British Leyland, and the car… well it’s doors fell off. 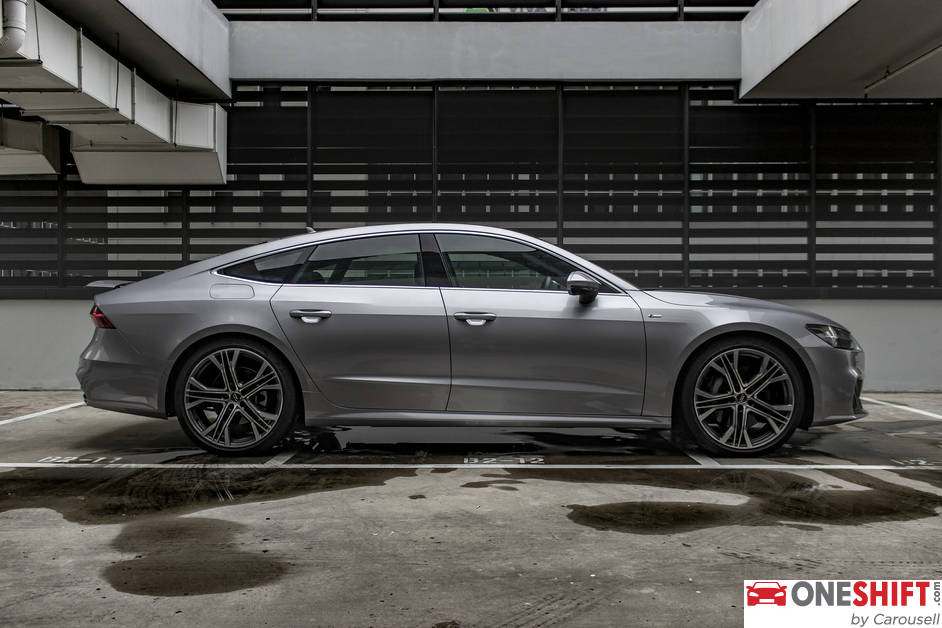 The second generation Audi A7 looks nothing short of refreshing, and they certainly have taken a leaf from the Brits, building a car with a similar silhouette, and delivering similar versatility as an estate (in Audi talk, an Avant). 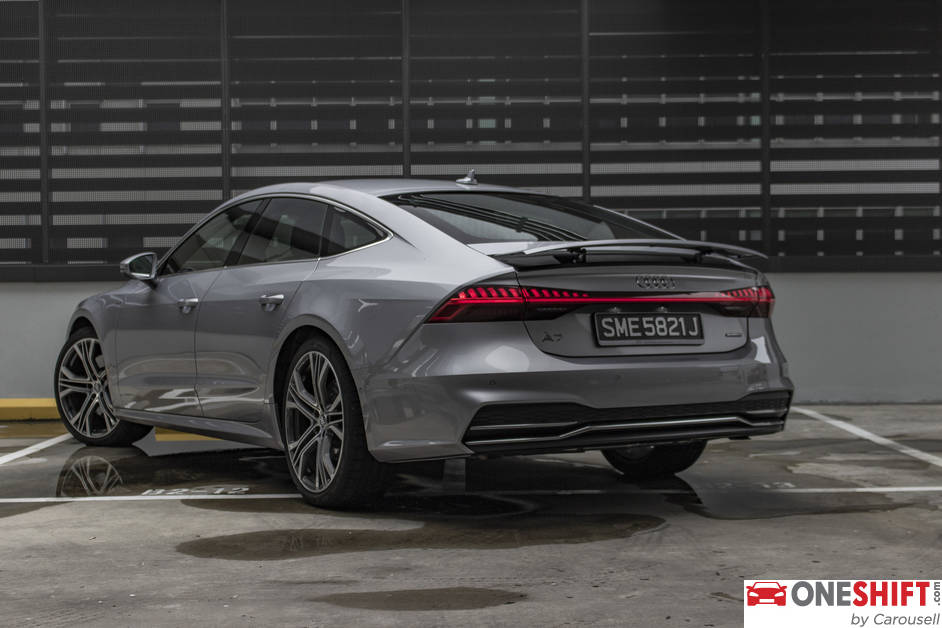 The new A7 now features sharper creases in its side sheet metal, which complements its large hexagonal grille, constant with current generation Audis. At the rear, a slimmer set of tail lamps, which includes a light bar (homage to the Ur quattro) are truly a visual treat. A second look reveals the manufacturer sneaking in a rhombus at the edges of the tail lights… a little hint of the car’s sporting intent (the S and RS model Audi cars are badged with the shape)... very cheeky… I like. 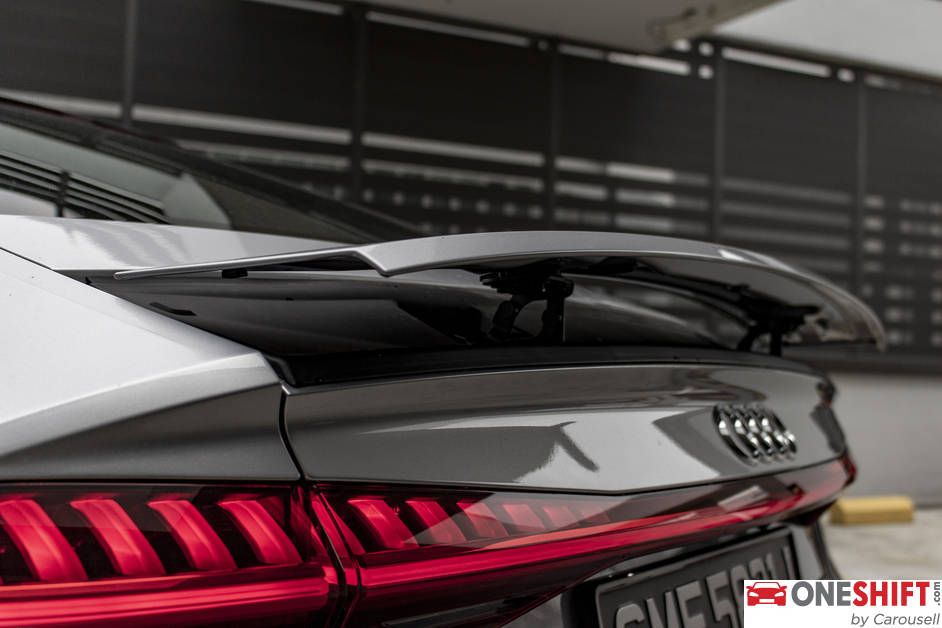 As a nod to the original Audi 100 S Coupe, Audi has also included a third side window, which tapers upwards, in the same fashion.

Our test car’s optional 21” 5-V-spoke star style, Contrast Gray rims look the part and are one of three 21” rim options, there are two 20” options available if you are more keen on slightly more comfort.

Audi has been well known to deliver among the best interiors in the industry, and the A7’s interior is no exception. Touchpoints like its electric-actuated door handles, choice of materials, to even the simplest things, like the way the lid on the central storage box opens and closes, all points to the lengths the German manufacturer would go through to ensure a quality car. Even with entry-range Audis like the A3, their consistency in quality is quite evident. 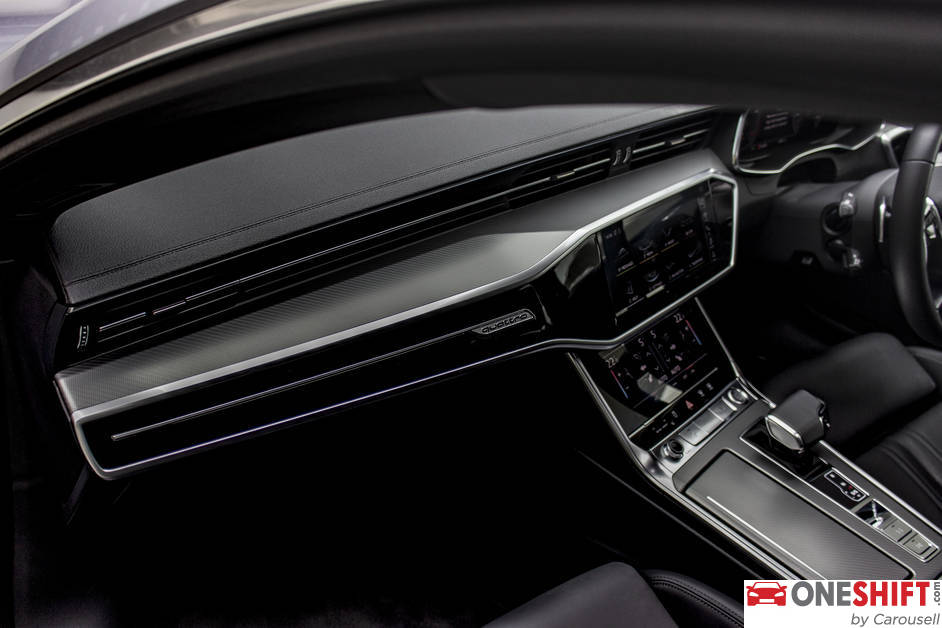 Organic shapes found in the previous car have been dropped, in preference for cleaner, creased panelling, which delivers a sense of lightness. Like the A8, and the rest of the larger cars in its range, the dash has been broken down into upper and lower sections. Its stacked MMI Touch Response infotainment screens, 10.1” and 8.6” respectively, and first seen in the flagship A8 grace the centre console; with their presentation only to be marred by user-sourced oily fingerprints (especially since it does support finger scribbles). Audi has also gone a step further by spring-loading their glass screens (which dip to the width of a human hair) for that added dimension of tactile feedback. I would however feel that the virtual buttons could be that little bit more sensitive. The MMi touch response system, also supports voice control, quite similar to the ones on Mercedes-Benz and BMW. 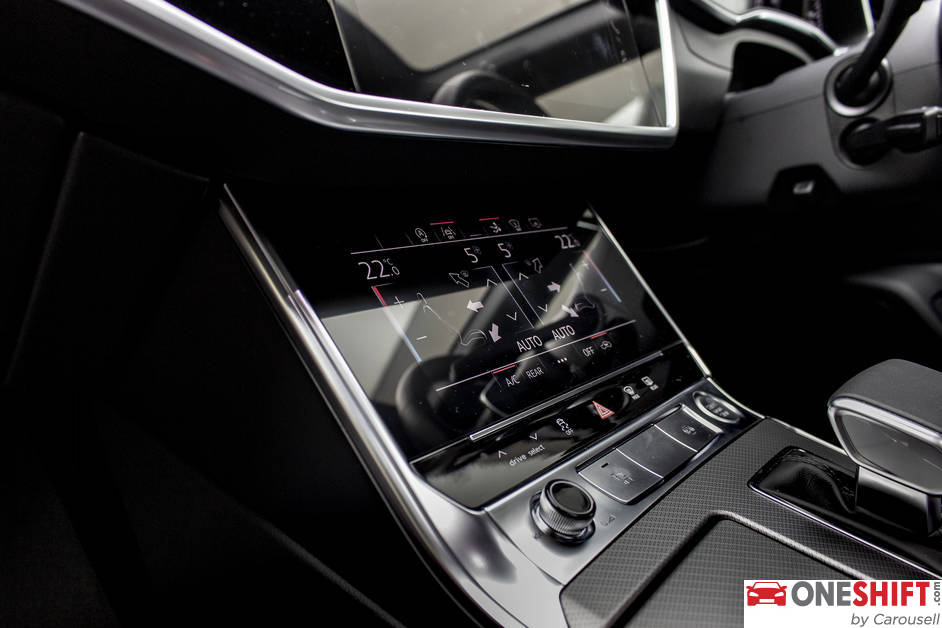 As with a good number of cars within the Audi range, the Audi Virtual Cockpit clearly delivers information to drivers, and offers the flexibility of prioritising navigational information, over the dials. Information is also displayed on a windscreen-projected head-up display, helping to keep eyes on the road. 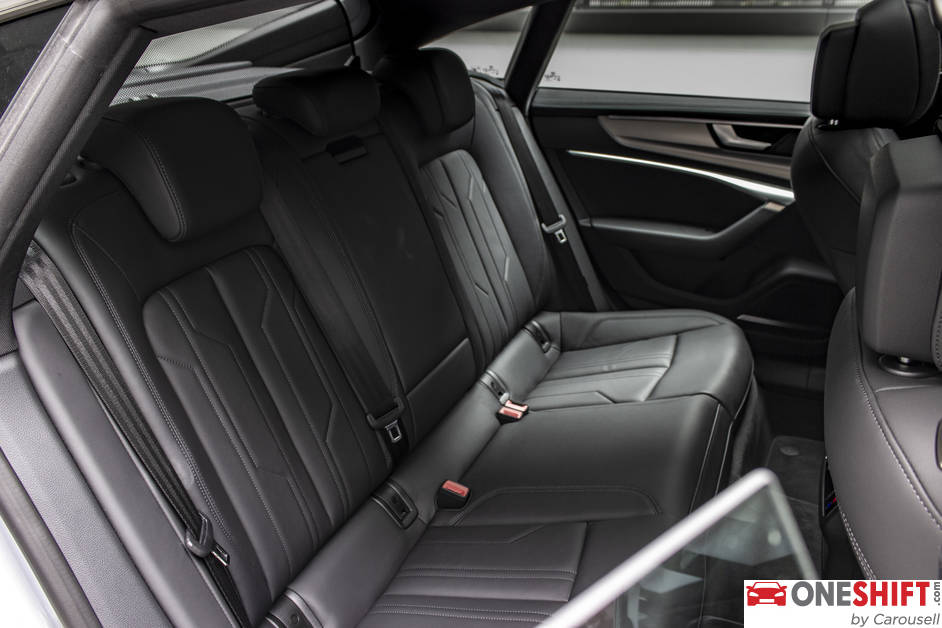 The interior, compared to its predecessor has grown all of 21mm… then again, the original car was already very well packaged. Passengers at the rear have good legroom to stretch in, though due to its low ride height, entry and exit can be slightly challenging for older folk. 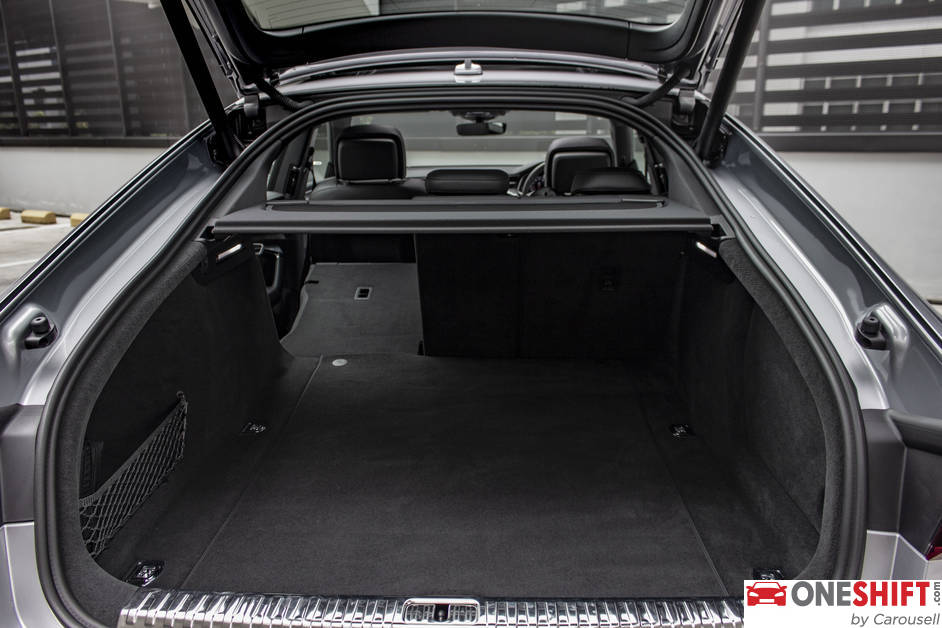 Cargo room is practical and remains unchanged, with a base size of 525 litres, and can be extended up to 1,390 litres, with the rear 40:20:40 style seats folded.

For the moment, Singapore gets just the 3.0 model, we know that there is also a 2.0 in the works, but we are unsure if it will reach our shores. The proven V6, which is shared with the likes of the Porsche Macan, Volkswagen Touareg and their very own Q8 SUV, its sister car, the A6 and flagship A8 sedan (and one of the most pleasant of engines I must say); delivers 340hp and 500Nm, the latter being delivered from as low as 1,370rpm, and stays at maximum twist till 4,500rpm. The engine makes itself known in slick-creamy fashion, and delivers its drive through a dual-clutch 7-speed S tronic transmission to all four wheels. 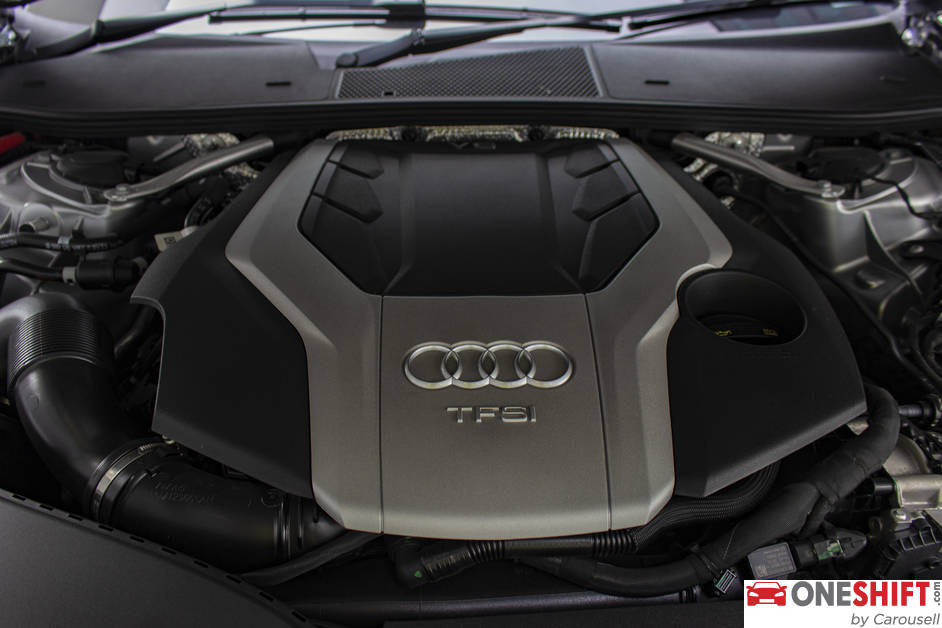 Acceleration is brisk, with the A7 clocking 100km/h in 5.3 seconds. Fuel consumption is stated at a combined 13.7km/l. Assisting the A7 in its startup, is a 48 volt system, which recuperates energy and also keeps the all the car’s passenger comfort and safety systems running, while the engine plays start-stop at rolling speeds of up to 22km/h in town traffic. The very same system also allows the A7 to coast from between speeds of 55km/h to 160km/h, for up to 40 seconds. 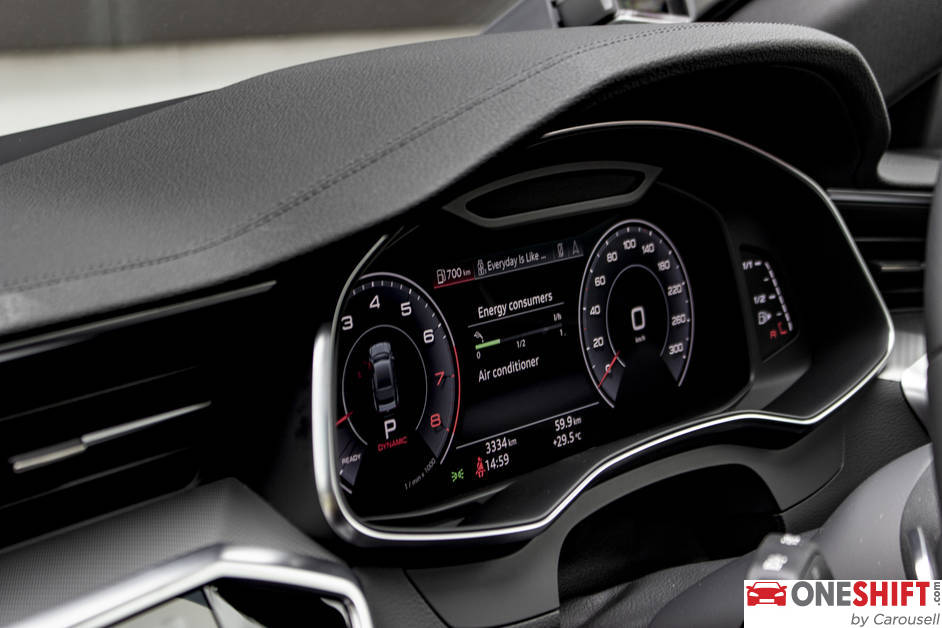 Handling is further enhanced by the car’s available dynamic all-wheel steering, which in Singapore, is sold packaged together with the sunroof. The rear wheels are able to steer 5 degrees in the opposite direction to the front to speeds of up to 60km/h for a tighter turn circle, while at higher speeds, mirrors the turning direction of those in-front, enabling greater stability and smoothness; similar to vehicles with a longer wheelbase during lane changes. 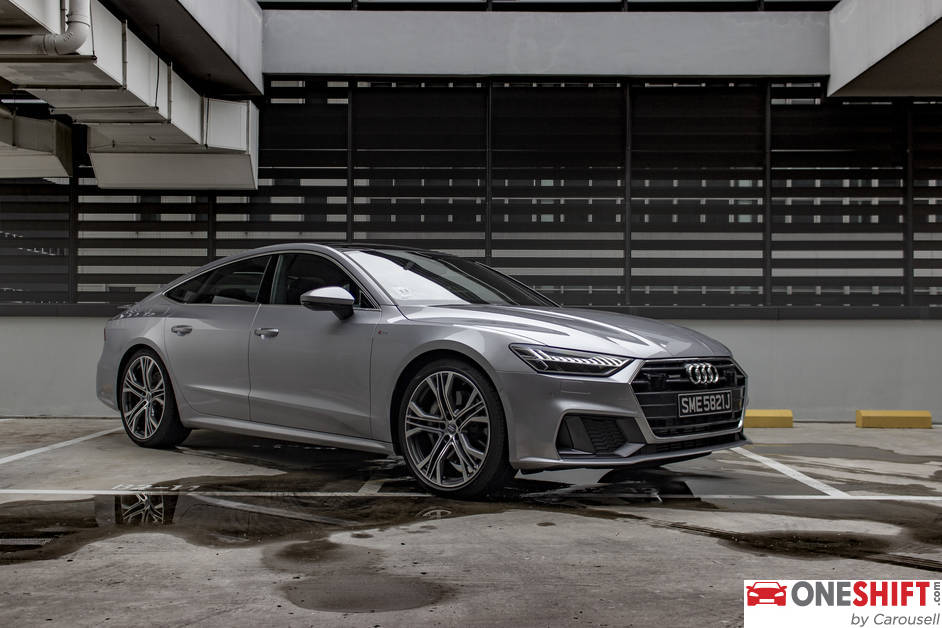 While all this “tech-and-go” looks impressive, the car delivers a satisfying driving experience, with a well-insulated interior. Those 21” rims with thinner tyres though, contributes to a little bit of road noise.

Unlike the A8 which has an air-suspension, the A7 sits on steel springs, and utilises dynamic dampers to deliver that fine balance of either a comfortable or a stiffer ride, depending on driver inputs. You may select drive modes, which also toggles the suspension settings; however we learnt quickly that leaving it to the car to decide is the best way to enjoy the drive. 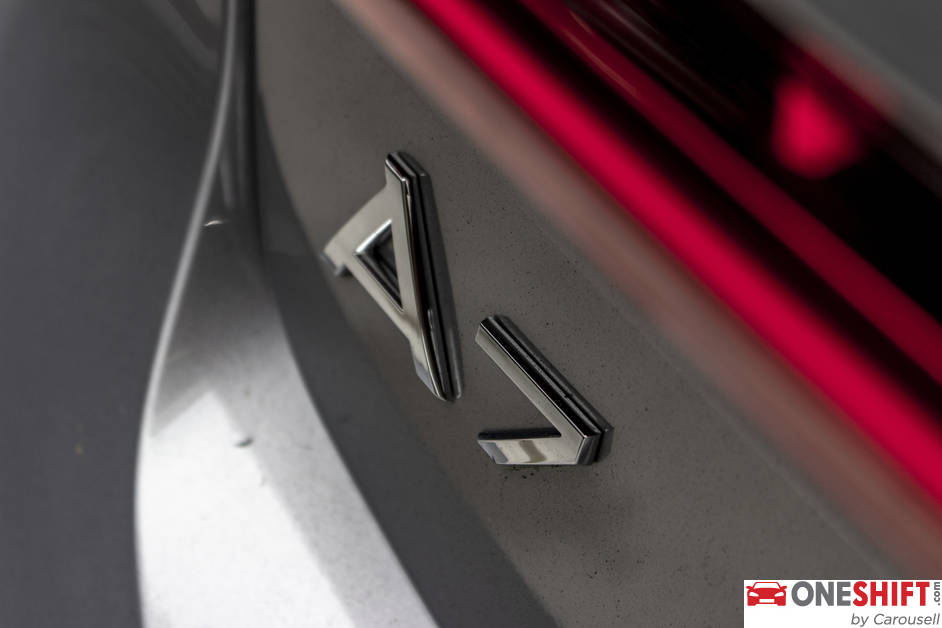 While it is related to the A6, and does the same job of hauling 5 with ease, its lower seating position does deliver a driving experience, similar to that of a large purpose-built two-door GT coupe; and it does come across as more connected.

The A7 is a very pretty car, and one which you will love to take a second look at. Its low roofline, tapered rear-end and long bonnet gels with how the front and rear lights are designed, the latter which are also found on the A8 and Q8; are truly a treat for the eyes… and it drives as good as it looks.